Case revolves around a lawsuit challenging face masks, capacity limits and other safety measures taken when COVID-19 was at its peak
By Shamane Mills
Share:

A week after Dane County's mask mandate expired, the ability of local health officials to issue such measures to protect the public in the future is being debated in a case heard by the Wisconsin Supreme Court Tuesday.

Over the course of the pandemic, Dane County’s health director Janel Heinrich issued nearly two dozen emergency orders pertaining to face coverings, crowd limits and what sports were temporarily off limits because of potential exposure to the coronavirus. 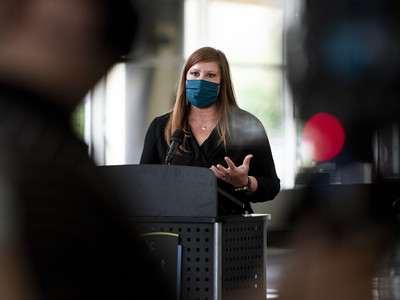 The case before the state’s high court was brought by two families of young athletes and a Dane County dance studio accused of being overcapacity in December 2020 when there was a prohibition on indoor gatherings of any size following a November 2020 surge of COVID-19 cases. The case is being brought against Dane County, the local health department and Heinrich.

Plaintiffs contend that the actions Dane County health officials took during the worst of the pandemic should have been approved by local elected officials and went beyond what is allowed in state law.

"This doesn’t mean local health officials have no power. There are a lot of things local health officials can still do to control, prevent and suppress disease that don’t require enforcement," said Luke Berg, an attorney for the conservative Wisconsin Institute for Law and Liberty who is representing Jeffrey Becker, Andrea Klein and A Leap Above Dance studio.

Berg pointed to health officials still being able to do contact tracing, testing, vaccination and providing recommendations for business and schools during a public health crisis.

Court briefs filed by the American Medical Association and Wisconsin Medical Society in support of local health officials noted that dangers created by a pandemic can change rapidly, making it critical that health professionals be able to act quickly. Delegating such responsibilities to local health officers lets them be nimble in times of crisis.

"The democratically-elected state Legislature made a policy choice to put the fight against communicable disease, as we saw in this pandemic, to the boots-on-the-ground at the local level as well as to create a dual system at the state level," said attorney Remzy Bitar, who is representing Dane County.

Plaintiffs said they would like to see the Dane County Board of Supervisors vote on what specific health measures can be taken and that local governments are subject to rules that limit how state or federal agencies can delegate power, known as the non-delegation doctrine.

But defendants say that doctrine doesn’t apply in this case and that Heinrich’s power was not unilateral.

"There are limitations. She has to report to the governing bodies, she has to inform them of the measures being taken, what’s going on with communicable disease. There’s also further statutory limitations that she can only take these actions during the course of the pandemic," Bitar told the justices.

The Wisconsin Supreme Court is expected to issue a decision in the case this summer.