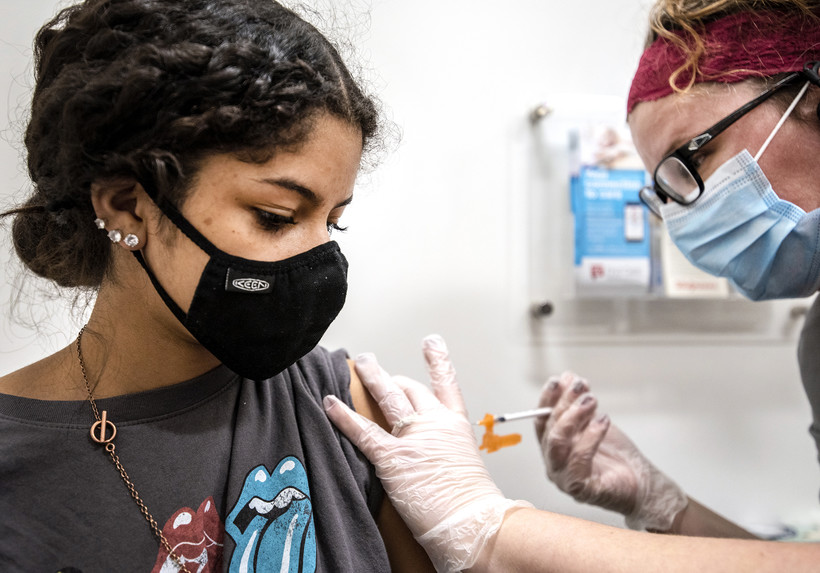 Nearly 40 Percent Of Wisconsinites Are Vaccinated, As Eligibility Opens Up To 300K Kids
By Madeline Fox
Share:

The 14-year-old can rattle off lists of past shots, ranging from her annual flu vaccines to an emergency rabies shot after she woke up one morning to find a bat hanging from her bedroom's smoke detector. None of them made her nervous — and while she's still not anxious about it, she said the Pfizer COVID-19 vaccine feels different.

"I don't really have a fear of needles, it's just like — this one's just more of a bigger deal," she said.

Lily is the last in her household to get a COVID-19 vaccine, and was newly eligible Thursday after Pfizer's vaccine was approved for kids ages 12 to 15 by the U.S. Food and Drug Administration and the Centers for Disease Control and Prevention earlier this week. Her mom, Rachel Rodriguez, immediately signed her up for her first dose at their local Walgreens in Fort Atkinson.

Lily got COVID-19 earlier this year, a very mild case that consisted mostly of a sore throat. She spread it to her mom and uncle, who both avoided particularly severe cases of the disease, but the experience has made her mindful of what vaccination means not just for her, but for other vulnerable people in her life, like her grandparents.

"I know there’s people that are close to me that can still get it pretty bad, so knowing that I’m vaccinated and there’s just a sliver less of a risk for them is just kind of helping me get through it," she said.

In a national poll by the Kaiser Family Foundation, only about a third of parents said they were planning to get their 12-15 year-olds a COVID-19 vaccine, while more said they would do so after waiting a while to see how it went for others, or if it became mandatory in order to attend school. Some research has shown more reticence among families about vaccinating their younger teens, even among adults who are very comfortable getting the shots themselves.

Some vaccination sites around Wisconsin have already begun advertising appointments for younger teens. The Omni Center Vaccine Clinic in La Crosse, for example, will have shots available for 12-15 year-olds this Saturday. Some vaccine clinics are already set up in school buildings and have been administering shots to older teens who have parental permission since Pfizer was approved for ages 16 and up. 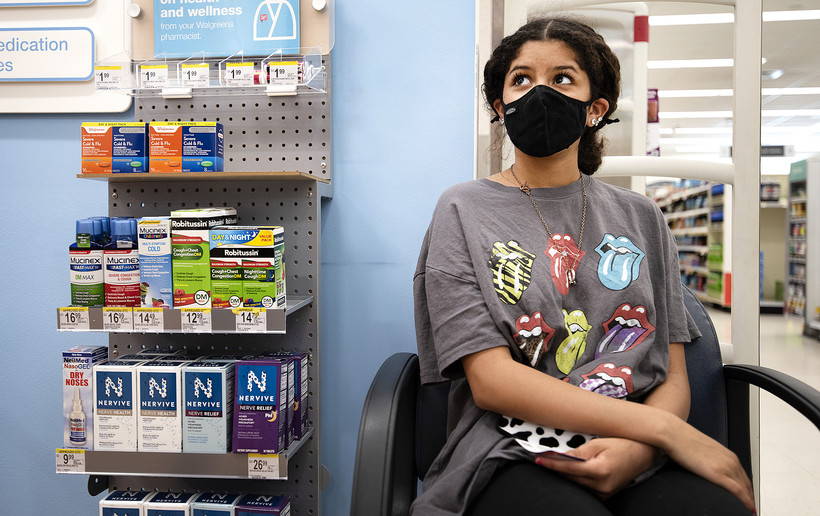 Lily Rodriguez, a 14-year-old, waits in a chair at the Walgreens pharmacy before receiving a COVID-19 vaccine Thursday, May 13, 2021, in Fort Atkinson, Wis. Angela Major/WPR

Lily said she hopes the expansion of vaccine eligibility will smooth out schooling next year.

She's finishing up her eighth grade year and will start high school in the fall, which means everyone at her next school will be vaccine-eligible — hopefully meaning fewer quarantines, shutdowns and other disruptions.

"I'm just kind of ready to getting back to living as normal as I can," she said. "COVID happened while I was in the middle of being a seventh-grader, and in three months, I'm going to be a freshman, so it kind of seems crazy how long it's been."

When she sat down for her shot, offering up her left arm, the woman administering the shot warned that her arm could hurt "like big brother punched you a couple of times" after the shot.

"I got hit with a lacrosse stick the other day, so I think I'll be fine," she said.

The shot went well, she said, with no immediate effects besides a little "pinch and pressure, like with other shots." She'll return for her next shot in early June.

"It'll be the beginning of summer, so actually I'll be able to go out and do more things that I probably haven't necessarily been able to do if I didn't have the vaccine, or if COVID was just as bad as it was last year," she said.