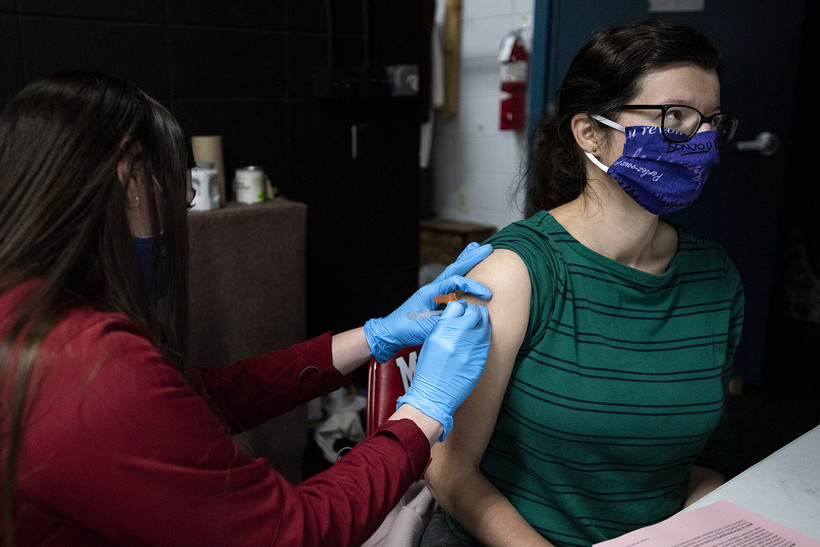 Vaccine 'Opens Up Doors For Me And My Family': Wisconsin 14-Year-Old Ready For COVID-19 Shot

Pfizer COVID-19 Vaccine Approved For Ages 12 To 15 On Monday
By Madeline Fox
Share:

Nationwide, about 29 percent of parents with children ages 12 to 15 said they'd get their child vaccinated immediately once it's approved, while about one-quarter said they would wait awhile to see how it's working, according to a poll from the Kaiser Family Foundation.

That puts the Rodriguez family, of Fort Atkinson, in the minority, though they're certainly not alone. Lily Rodriguez, 14, said she's excited to get her shot because of what it will mean for her family, who is otherwise fully vaccinated.

The Centers for Disease Control and Prevention's Advisory Committee on Immunization Practices is scheduled to meet Wednesday to advise the CDC on whether to recommend use of the vaccine in this age group. Dr. Rochelle Walensky, the CDC director, will then decide whether the agency will recommend the vaccine's use in the new group.

In previous years, Rodriguez's family has taken a trip up north over the Fourth of July holiday. With cases climbing last July and vaccines not yet approved, the family opted not to travel. If Lily can get her first shot as soon as this week, though, a vacation looks much more likely this summer.

Lily also started a job at Dunkin' on Monday. Though she hasn't gotten her vaccination yet, knowing that's on the horizon puts her mom more at ease about such a public-facing job.

"It will be nice, and peace of mind for me, knowing that she will be fully vaccinated," said her mother, Rachel Rodriguez.

Rachel has been using VaccineFinder.org, which can filter vaccination sites by vaccine manufacturer, to get a sense of where they might be able to find Pfizer shots.

"I think it is really going to be a sort of trying to pull the trigger as quickly as possible to see what places have the Pfizer vaccine available, and at what times," she said.

Faith Jewell, of Eau Claire, turns 12 on Friday, which means she'll soon be eligible along with the rest of her siblings. She said the news wasn't too groundbreaking for her.

"I knew that it was going to happen eventually, it was just whether it's sooner or later," she said. "Even though I get the vaccine, it's probably going to be pretty much the same lifestyle, I'm just more immune to COVID now."

For her sister Lydia Jewell, who's 15, it's a bigger deal — many of her friends and classmates were already eligible, at 16, and have already gotten their shots.

"I'll be able to see more people, and be a little bit more social, because I'm a very social person," Lydia said. "It would be nice to have the vaccine, so I don't have to be as worried about COVID."

The girls' parents and their 17-year-old brother have already gotten both doses of the vaccine. The Jewells have already navigated the Pfizer-only issue, since it was the only vaccine approved for their 17-year-old, as well. They're anticipating being able to get Faith and Lydia their shots at the Prevea clinic at Jacob's Well Church in Eau Claire, where their mom and older brother got their shots.

Neither sister is very fond of getting shots, and both are a little anxious about the side effects. Still, they said, they recognize the greater good.

Faith said she hasn't talked to friends about becoming eligible for the vaccine this week. Lydia, who already has vaccinated friends, has talked to her other 15-year-old friends about it.

"Most of them are pretty excited about the idea," she said. "Some of them are a little more hesitant, but I don't think any of them have tried to stop me from getting the vaccine or anything."

In a briefing last week, state Department of Health Service Chief Medical Officer Ryan Westergaard said he was confident that once the FDA authorized the vaccine for use in younger children, it would both push Wisconsin and other states closer to herd immunity and be safe for the kids themselves.

"The results seem highly analogous to what we've learned about the effectiveness in the adult population, so that was terrific news," he said "We did not hear that there were any safety concerns, and in general, with many vaccines, younger people, children and adolescents, tend to mount very effective, very robust immune responses."

Moderna and Johnson & Johnson have also been running trials to test the vaccine's effectiveness and safety among children. Pfizer has said it plans to go to the FDA again in September to get its vaccine approved for children ages 2 to 11.

Wisconsin can mandate children get vaccines in order to attend school, daycare or nursery school, and does for immunizations including measles, mumps and rubella (MMR) and tetanus. However, state officials haven't given any indication that they plan to require COVID-19 vaccines. Additionally, Wisconsin is one of a handful of states to allow families to exempt their kids from vaccine requirements based on "personal conviction," in addition to exemptions based on religious beliefs and medical necessity.

According to the Kaiser Family Foundation poll, 18 percent of parents would get their child vaccinated for COVID-19 if schools required it.