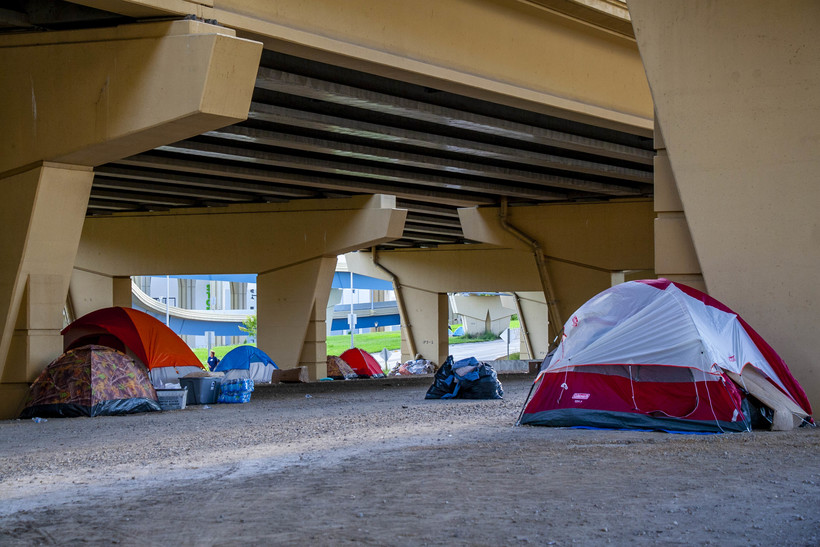 Republican bill is part of a larger package on addressing an ongoing workforce housing shortage
By Christine Hatfield
Share:

People living temporarily on public property would be subject to criminal charges, including fines and jail time, under a new Republican bill in the state Assembly. It's raised fierce opposition from critics who say it will harm people experiencing homelessness, while the measure's author says it's meant to help them.

The bill received a public hearing Tuesday, less than a week after it was introduced as part of a package of legislation that Assembly Republicans say is aimed toward addressing the state's workforce housing shortage. Those bills include provisions around zoning and approval of new workforce housing projects for certain local governments.

On Tuesday, the Assembly Committee on Housing and Real Estate heard from lobbying groups and local government officials on the myriad proposals in the package.

One of the bills, AB604, would make temporary living on public property a Class C misdemeanor. For people without homes, that could mean 30 days in jail or up to a $500 fine.

State Rep. Alex Dallman, R-Green Lake, is the sponsor of the bill. He said the proposal is a matter of public safety and compassion.

"We can't just have people living in alleys around the city," said Dallman. "We'd like to have them in an area where we can monitor the safety of the area and make sure that they feel safe as well, in the places that they live."

"We're trying to get them to housing, get them into a job," said Haywood. "I don't think criminalizing them and giving them a misdemeanor or putting them in jail or fining someone who's homeless — who I'm pretty sure doesn't have the money to pay that fine — I don't think that helps the problem at all."

That bill would also withhold portions of grants to organizations supporting homeless people, unless such an organization can prove it has helped people get permanent housing or a job, or help reduce the number of people experiencing homelessness multiple times. Organizations that do so after six months would receive the remaining amount of the grant.

James Bohl of Milwaukee's Intergovernmental Relations division said while the city has not taken an official position on the bill, several aspects of it have raised concerns.

"Certainly you find no local government desiring to prolong housing issues and raise concerns among the community, but the resolve to withhold monies is not going to create a better fix to the problem," said Bohl.

"When you're sending someone in to navigate in a marketplace where there isn't any affordable housing and then saying, if you fail, we'll take your money away and we'll give it to somebody else, who's going to do what?" said Lewis. "We don't have housing to navigate. That's one of the biggest problems that we're facing."

The proposal also creates grants which would be used to hire housing navigators who would do work like serving as a liaison between homeless assistance programs and landlords and property managers.

"I believe the population will, in fact, either move to a different location or be able to be put into a program that would help them out," said Dallman.

State Rep. Jodi Emerson, D-Eau Claire, noted her concerns over the bill taking away the ability of first responders to help direct homeless people in the direction of shelters and other resources.

"We've seen it be very successful in Eau Claire," said Emerson. "I'm opposed to this bill if it is going to do away with our local police officers' opportunity to reach out to the homeless population in that sense."

Kurt Paulsen, a professor of housing, land use and municipal finance with University of Wisconsin-Madison, said the bill's provisions contrast with research indicating the expansion of permanent supportive housing is a solution to homelessness.

"Creating a criminal trespass for unsheltered homeless persons is moving in a different direction than expanding availability of permanently supportive housing," said Paulsen.

Paulsen said for the most part, the bills included in the housing package fall under the categories of financial resources and tools and zoning and land use regulations.

He said while the proposals would collectively begin to address the housing shortage, they would not solve the problems at hand.

"It took us 20 to 30 years to build ourselves into a housing crisis, so we should not expect that any one particular piece of legislation or tool will solve things right away," said Paulsen.

Some of the proposals address issues stretching beyond the housing shortage. Paulsen noted AB608's provisions around requiring cities or villages with water and sewer service to have at least one area where multifamily housing would be allowed.

"I think that policy, which you are seeing adopted in a lot of states across the country, is really trying to overcome some of the historical problems with zoning as it emerged in the 1920s and the 1930s," said Paulsen. "Historically, the rise of zoning in the United States was rooted in exclusion of multifamily dwellings from single family communities."

Other proposals that came up during Tuesday's committee hearing included:

Paulsen noted how the housing fund investment bill drew support from government officials across the state.

"I think that illustrates that housing is not just an urban or rural issue or a red or a blue issue, but that there are creative tools and policy solutions that can garner a wide range of support," said Paulsen.

Voting is expected on the bill package in committee in the coming weeks. If it passes, its next stop would be the full Assembly.