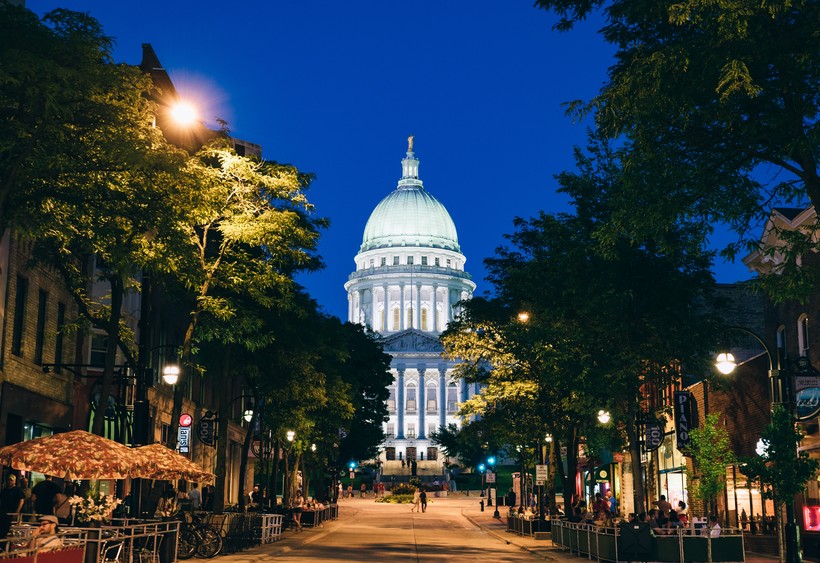 Proposal Calls For A 'Convention Of States' To Pass Balanced Budget Amendment
By Shawn Johnson
Share:

Republicans in the Wisconsin Assembly voted on Wednesday to join a growing list of states calling for a national convention to add a balanced budget amendment to the U.S. Constitution.

It would be the first time the process known as the "convention of states" had been used to amend the U.S. Constitution since its ratification in 1787. The legislation would still need to pass the state Senate and a total of 34 states would need to sign on before a constitutional convention would be called.

Still, by some measures, nearly 30 states have already called for a constitutional convention, making the prospect appear more possible today than it did just a few years ago.

"It truly is our duty," said state Rep. Dan Knodl, R-Germantown, the Assembly sponsor of the balanced budget resolution. "Congress has failed."

Critics warned that once a convention was called, there would be nothing keeping delegates from pursuing other amendments to the constitution on unrelated issues.

"Let's not threaten what is the last and greatest and best symbol of democracy and liberty in the world by jeopardizing our U.S. Constitution with a constitutional convention," said Rep. Cory Mason, D-Racine.

The existing 27 amendments to the U.S. Constitution, including the first 10 amendments that make up the Bill of Rights, were proposed by two-thirds votes of the U.S. House of Representatives and U.S. Senate and ratified by the legislatures of three-fourths of the states.

During debate in the Assembly on Wednesday, several Republicans cited a nearly $20 trillion national debt as the reason that states need to push for a federal balanced budget amendment.

"If you look at history, at the great empires, it wasn't the sword that brought those empires down, it was the financial burden," said Rep. Dale Kooyenga, R-Brookfield. "One of the greatest threats to our national security is excessive debt."

But while the resolution that passed the Assembly on Wednesday, calls for a balanced budget amendment, it doesn't spell out what that would mean. Democrats, like Rep. Jimmy Anderson, D-Fitchburg, told Republicans that if they want to cut spending on everything from Medicare to the military, they should say so.

"If that's what you want, there's a process to accomplish those goals that doesn't require a constitutional convention," Anderson said. "They're called elections. Run on it. Run on cutting Medicare. Run on cutting our military budget. Run on dismantling the federal government."

The resolution calling for the balanced budget amendment passed 54-41 with seven Republicans joining all Democrats in voting against it.

The Assembly also passed another plan that would have the governor and legislative leaders — all of whom are currently Republicans — pick seven of the state's nine delegates to a constitutional convention.

As it stands right now, Republicans would appoint a majority of delegates nationally, too. Thirty-two state legislatures are currently under GOP control.

State Assembly Republicans also passed another measure on Wednesday endorsing a set of rules for a constitutional convention. The rules were developed by an organization called the Assembly of State Legislatures, whose co-president is State Sen. Chris Kapenga, R-Brookfrield.

If a convention were called, ratifying any new amendments would still require approval by the legislatures of 38 states or by a state ratifying convention in 38 states.

State lawmakers also voted to give themselves considerably more power to block administrative rules that are written by state agencies to implement laws.

The plan would require the full Legislature's OK for any administrative rule that's projected to cost $10 million or more to implement.

It would also let lawmakers hire outside consultants to arrive at that cost. Democrats said that raised the prospect of business groups producing inflated cost estimates to block rules that they don't support.

"You're going to let industry lobbyists and stakeholders intervene at the eleventh hour to halt the enactment of laws in their track by simply ginning up a document," said Rep. Diane Hesselbein, D-Middleton. "The process will be derailed by those with political clout and industry agendas."

Rep. Adam Neylon, R-Pewaukee, acknowledged that there was nothing in the bill preventing the Legislature from hiring a lobbyist to estimate the cost of an administrative rule.

"However, I think it's vital that this bill passes as it currently is," Neylon said, telling his colleagues that adding such a prohibition to the bill might keep it from becoming law this session.

Neylon's plan would also give the legislature's Joint Committee for the Review of Administrative Rules the power to indefinitely block a proposed rule.

The state Senate passed an identical version of the plan earlier this month.