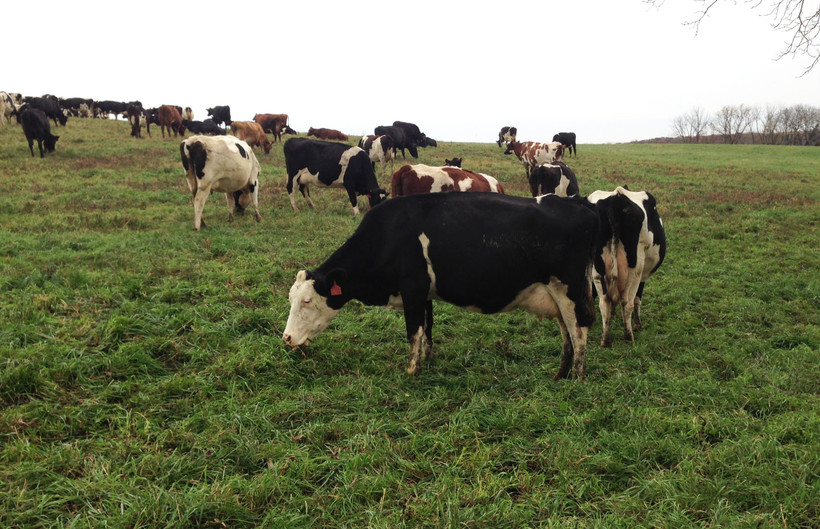 The cows at Grass Dairy and Uplands Cheese are moved to a different pasture every four to 12 hours depending on the time of the year. Maureen McCollum/WPR

The average farmer in Wisconsin is getting older and older.

More than half of the people running a farm’s day-to-day operations are over the age of 55, according to the U.S. Department of Agriculture's Census of Agriculture.

As these farmers consider retirement, they have to start thinking about what to do with the land and their business. Some farmers will hand the farm down to their children or other family members. If the family isn’t interested in dedicating their life to agriculture, the farmers could look toward selling the farm to another family or to a corporation.

Farms can be expensive, in the millions. And for the increasing number of young farmers trying to enter the industry, land can be nearly impossible to afford.

As the industry ages, young farmers are needed more than ever.

While there are many ideas floating around on how to address this issue, one solution is creating mentorships.

At a dairy farm in Dodgeville, about 200 cows are having their morning meal grazing on grass, happily chewing away.

And once they’re milked later in the afternoon, that milk will go to creating the renowned Pleasant Ridge Reserve and Rush Creek Reserve cheeses on site.

"My passion is grazing dairy cows and making milk from pasture," said Scott Mericka, co-owner of Grass Dairy and Uplands Cheese Company. "It’s a philosophy. It’s a part of who I actually am." 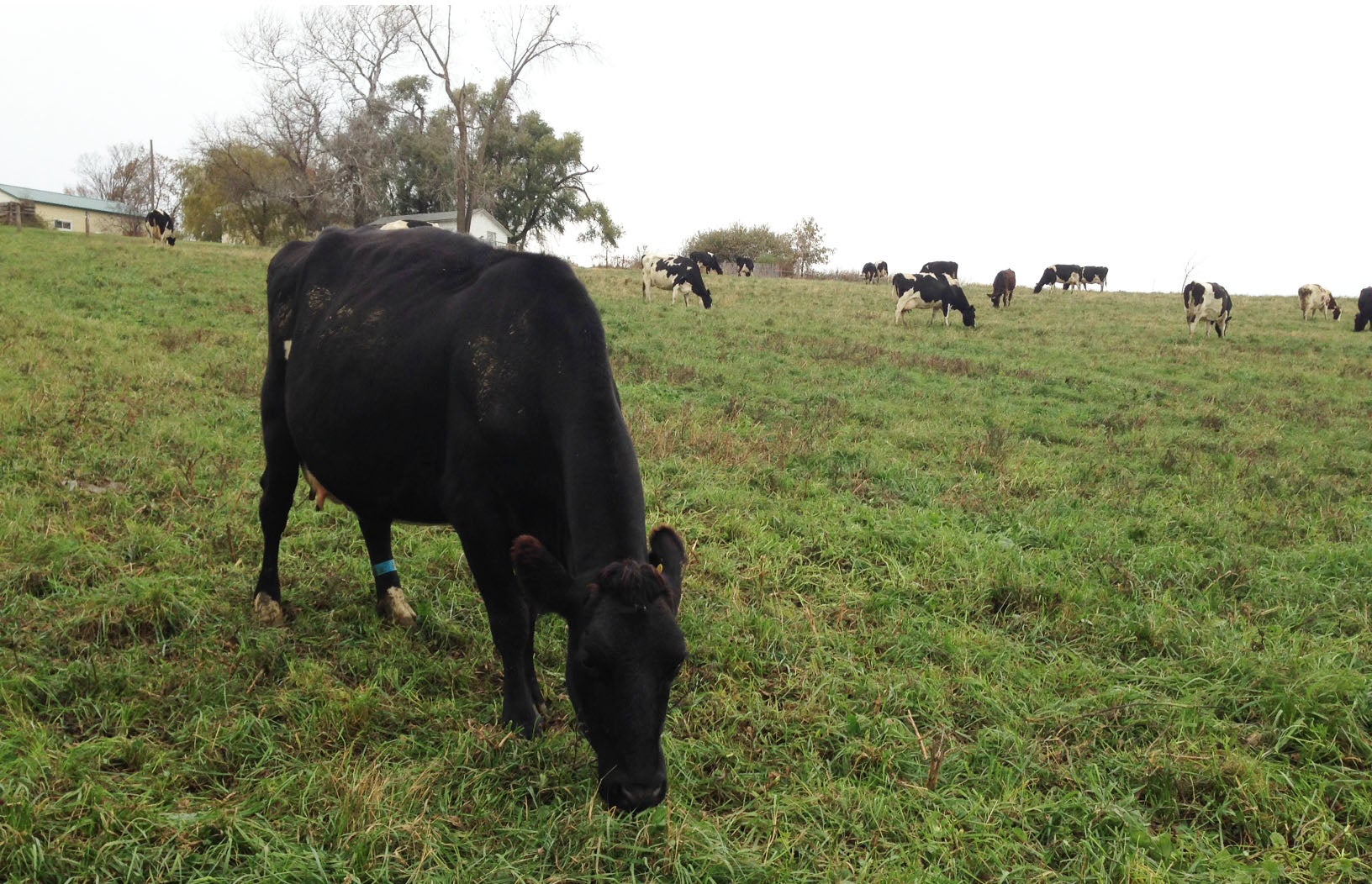 At Mericka’s farm, the cows’ diet almost exclusively comes from the pasture.

The 32-year-old dairy farmer bought the operation with his cheesemaking partner Andy Hatch in 2014. The duo and their wives spent years working with the previous owners doing the daily chores, learning the farm’s quirks, and building equity.

"You know, here I am today running my own business," said Mericka. "I work where I live. I have my family I can see whenever I want, and it’s a beautiful business, I love it. I wouldn’t change any decisions I’ve made."

Now, Mericka is, in a way, paying it forward.

He’s hosting an aspiring farmer through the Dairy Grazing Apprenticeship, or DGA. It acts like a matchmaking service, partnering master farmers with beginning farmers or experienced farmers who want to transition to grazing.

It’s his friend, Matt Nielsen, who like Mericka, did not grow up in a farming family. Nielsen has toyed with the idea of becoming a farmer since he was a kid. But before settling down on the farm, he had to get some things out of his system.

"I’ve been living in Chile the last couple years. I took a big bike trip, and I’ve just kind of seen what I wanted to see," said Nielsen. "But that agitation was always in the back of my mind, calling me. 'Maybe I should try dairy farming again?' I found myself all throughout my travels still reading about dairy farming, still trying to download all these publications about cheesemaking. I thought, 'Well, what am I putting it off for anymore?'"

Now that he’s ready to dive in, Nielsen decided DGA was the best way to prepare himself to be a farmer.

"I always knew if I was going to get a good start in dairy farming, I knew nobody who was more knowledgeable and enthusiastic than Scott," said Nielsen, 30.

"Enthusiastic, but I don’t know about knowledgeable," Mericka said laughing.

Nielsen visited Mericka and his wife, Liana, on the farm and always asked questions.

"I’d come visit them, just because we were friends, and I’d always pick his brain a bit," Nielsen said. "Beat around the bush, asking, 'Well, how miserable is your life really? How many hours do you work? What’s it like missing every Christmas and Thanksgiving?' And he was always like, 'It’s not like that.'"

Nielsen has signed a long-term contract to work with Mericka on the farm. Through DGA, Nielsen has to complete 4,000 hours of training on the job and in the classroom since beginning in September. He’ll check off lessons learned in a workbook. In return, Mericka pays Nielsen a salary and offers bonus incentives. 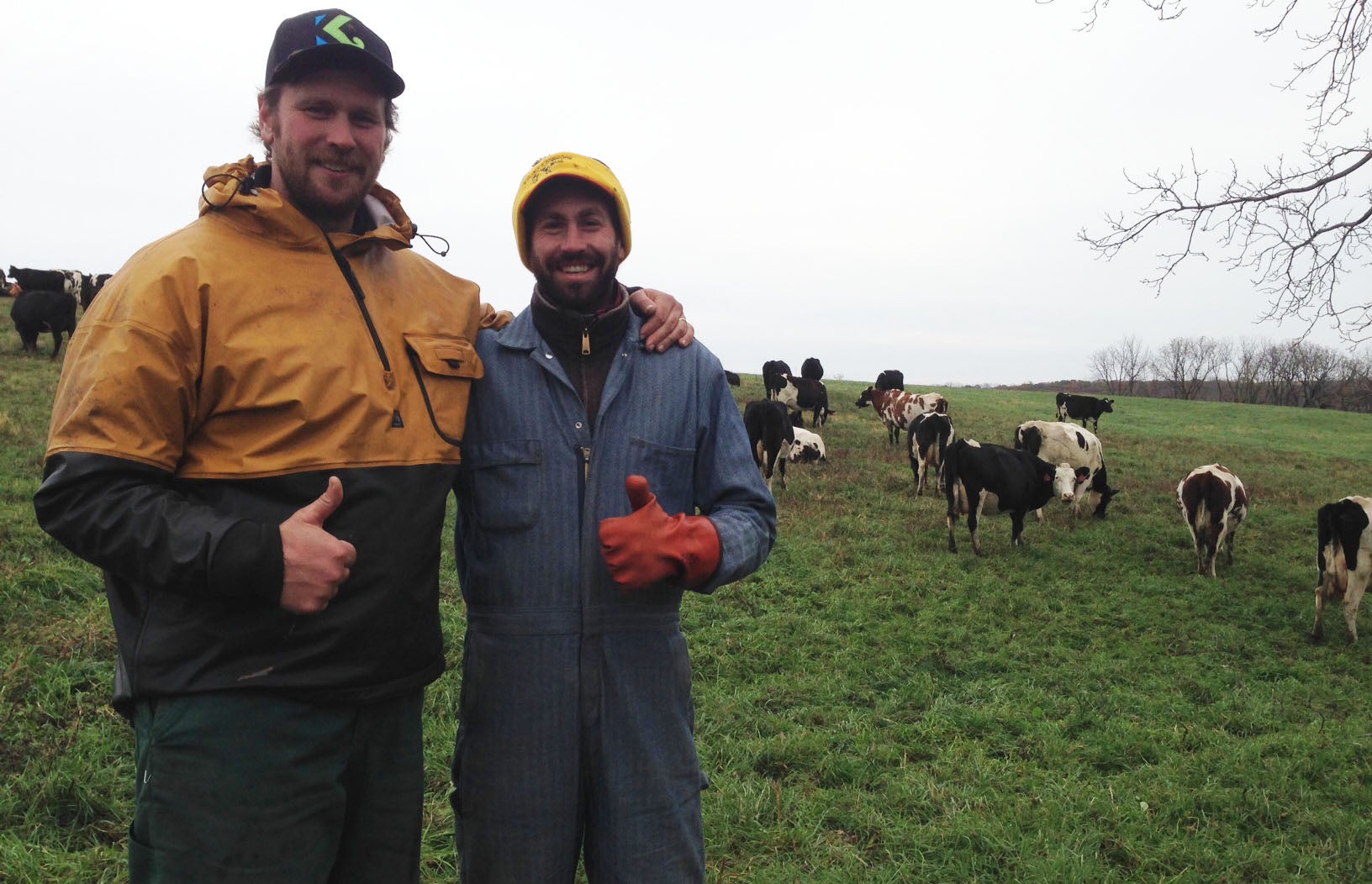 Scott Mericka, left, of Grass Dairy and Uplands Cheese is mentoring Matt Nielsen, right, on how to be a dairy farmer who specializes in grazing. Maureen McCollum/WPR

The Dairy Grazing Apprenticeship is the first formal agricultural apprenticeship in the United States. It started in Wisconsin in 2010, has spread to 10 states, and is registered with the U.S. Department of Labor.

Joe Tomandl founded the program after witnessing the loss of the family farm. The former high school agriculture instructor and current grazing dairy farmer says they based the program on the classic guild apprenticeships.

"We’re trying to figure out, how can we bring more farms back onto the landscape?" Tomandl said. "How can we create more opportunities for independent business people to fulfill their dreams and aspirations and get on a dairy?"

Tomandl said in the past farming knowledge was passed on from generation to generation within families. That’s often not the case anymore.

"I mean, we just are not seeing the sons and daughters that are interested in coming back to the dairy. So, much of that transition of knowledge is not happening," Tomandl said. "But there are enough people outside family looking at coming into dairy someday. So that's where this formal process is important, and it’s starting to take over, so we can provide these types of opportunities for new entrepreneurs in dairying."

Not only do new farmers need to acquire the knowledge to run a farm and prepare themselves mentally for the life, but they have to have the capital to eventually invest in a farm.

Buying land is the biggest obstacle for farmers under age 40, according to the National Young Farmers Coalition. Many reported it being difficult to buy land on a farming paycheck.

Each DGA mentorship is different, but all mentors are required to pay the apprentices. Some may take the relationship a step further and offer equity in the farm or consider transferring ownership down the line.

At Grass Dairy and Uplands Cheese, Nielsen says one day he’d like to own his own farm or manage one. The way the business is structured now there’s no way Nielsen could come on as a partner. But, Mericka says things could change in the future.

"Now let’s say in four or five years, the opportunity comes up to buy another 300 or 400 acre farm and put another 200 cows there. I’m not going to do that and then have this farm fall to pieces," Mericka said. "But I could put a manager on this farm while I develop the other farm and have a program where they might own the cows or split the milk check, whatever it is."

He sees this as being one way new farmers lacking capital could succeed in the industry.

Mericka said Nielsen has a lot of potential to be a successful farmer. Partially, because he’s gentle with the animals. Also, because Nielsen is constantly striving to be better.

"He really didn’t know much about cows and probably still doesn’t," said Mericka. "But it’ll come. And it’ll come because he wants to learn and that’s the most important foundation for being successful in this business. If you close your mind and you say there’s only one way to do this and you’re never striving to get better or realize your own shortfalls, you never get anywhere. And your business will truly wither and die."

And so much of Nielsen’s future is dependent on the knowledge he gains from Mericka over the two-year long apprenticeship.

"I am a person who asks a ton of questions, like 400 questions a day," said Nielsen. "But Scott is so patient with me. He almost rarely says, 'I don’t know,’ which is something I appreciate with his vast bank of knowledge."

Nielsen shot back. "No, but I’m very, very happy. I’ve actually never been this happy in any job."

"He hasn’t had calving season yet," Mericka said. "So, that’ll change things a little bit, calving’s a little stressful for everybody."