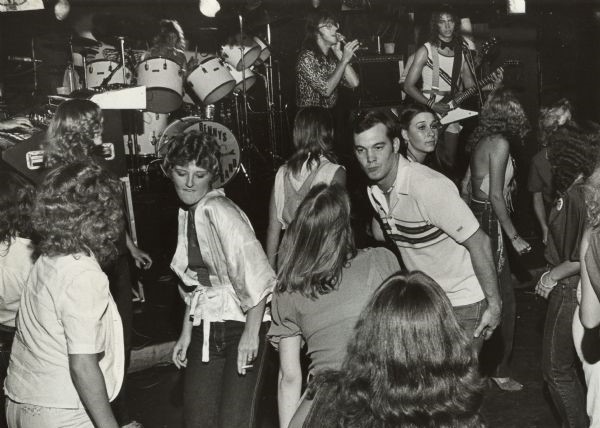 Rock fans dance to the music of Benny's Basement Band at Fantasy's in 1981. Photo courtesy of the Wisconsin Historical Society

What Is THE Wisconsin Song?

WPR recently received a question from a listener, Antoinette, who asked: "Why doesn't Wisconsin have a song? There isn't a single song that I hear and think, 'Good ole Wisconsin.'"

This question left our heads spinning. Is there a song that represents or unifies our state’s diverse music fans?

It turns out the state does have an official song, "On, Wisconsin!", a version similar to the University of Wisconsin-Madison fight song (more on that in a little bit), but it's not something you often hear outside Wisconsin Badger games.

So, we decided to dig deeper and turn this question to some Wisconsin music journalists and hosts and find out what they thought is THE Wisconsin song.

"My choice is the song 'Beer Barrel Polka' also known as, 'Roll Out the Barrel.'

It's played all over the state at sporting events, weddings, and Oktoberfest celebrations. But, probably the most Wisconsin version of all is performed by Liberace. It was a favorite of his and his version is a weird, charming mix of Wisconsin's most iconic cultural contributions."

Intertribal song by The Tribe

"My pick for Wisconsin's song would be 'Blister In The Sun' by the Violent Femmes. It's instantly recognizable. It's catchy. It makes everybody happy when they hear it. It's one of those songs that people will be listening to decades from now."

"This is a tough question because in Wisconsin, we don't really have a song, right? But, I think the artist that encapsulates Wisconsin the most is our very own Justin Vernon, a.k.a. Bon Iver.

"The thing that Bon Iver has done is he has created an archetype of an artist. The artist that goes into nature and stays there until they've created a masterpiece. In Bon Iver's case, he went up into the northern woods of Wisconsin in the winter and boarded himself up until he created the masterpiece that is his album, 'For Emma, Forever Ago.'"

"He probably wears this state on his sleeve. And there's something about his music, when you listen to it, it sounds like a cabin up north in Wisconsin.

"So, I know it's going to create a little bit of controversy because he's relatively new, and the song itself doesn't actually say Wisconsin in it or talk about the state directly, but I think that at its heart, 'Skinny Love' by Bon Iver encapsulates the feeling of in and being from Wisconsin."

"The song that comes to my mind is titled, simply, 'Wisconsin,' recorded by Glenn Yarbrough. You may remember it as the theme to 'North Country Notebook', a WPR show from about 30 years ago when I was a kid, which featured the writings of George Vukelich.

It's a wistful folk song about what changes and what stays the same in a place you love. I can't hear it without thinking about my public-radio-listening father and the Wisconsin that we both knew."

But opinions aside, what about that official state song, "On, Wisconsin!"? It turns out it has its own interesting backstory.

"On, Wisconsin!" was written by Carl Beck and William Purdy in 1909. "Purdy was a musician and found out University of Minnesota was having a contest for a new football song. He wrote the song for Minnesota originally," explained David Null, the retired director of UW-Madison's archives who's studied the song’s history. "So instead of 'On, Wisconsin!' it was 'Minnesota, Minnesota' ... Beck convinced him to self-publish the song and give it to University of Wisconsin."

The song was introduced at a UW-Madison pep rally Nov. 11, 1909 before a football game against Minnesota.

"Supposedly, John Philip Sousa said it was the best fight song in the country," Null said. "I suspect people at Notre Dame and Michigan might dispute that. If you look at the number of high schools and colleges that have adopted the song, obviously it's popular. It's a very upbeat song and can be adopted for a number of different uses."

The version of "On, Wisconsin!" that most people know is heavy on the football lingo. It’s still used today at Wisconsin Badger games to pep up the fans.

"They wrote it for a commemoration of the Battle of Lake Erie," said Null. "They decided if they were going to use the song as the Wisconsin delegation they needed some better words, more dignified than, 'Run the ball.'"

"There aren't lots of occasions to use state songs. If there are big events, you sing the national anthem. At a football game, you sing the national anthem then the football version of 'On, Wisconsin!'" Null said. "I think it's useful representing the state elsewhere, like if the Wisconsin delegation is in Washington. It's probably used more for that then in the state itself. People say, 'On, Wisconsin!' is the state song, but if you ask people to sing the state version, they wouldn't get very far," said Null laughing.

Wisconsin also has a state ballad and a state waltz.

What do you think is THE Wisconsin song? Add your picks in the comments section below!

This story is part of Wisconsin Life and WPR's WHYsconsin project. What have you always wondered about Wisconsin, its people or its culture that you want WHYsconsin to look into? You ask the questions, and we find the answers!