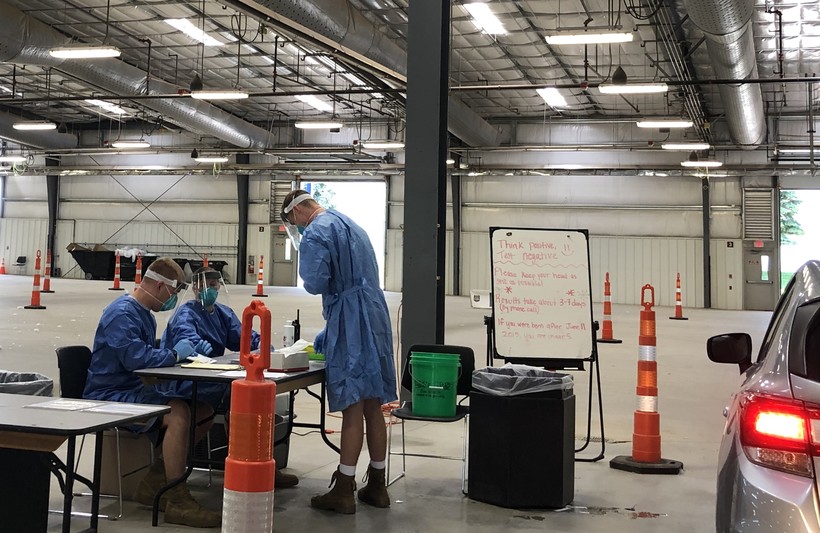 According to the state Department of Health Services, nearly 400,000 people have been tested for COVID-19 in Wisconsin since mid-March. But for many, what it feels like to get a test for the new coronavirus is still a mystery. The following is a first-person account from WPR’s Laurel White on her own experience getting the test in Madison.

Last week, I decided to get a COVID-19 test because I’d been in crowds of hundreds — sometimes thousands — while covering Black Lives Matter protests and events.

Sometimes protesters weren’t wearing masks, though many were. Often protesters were yelling, chanting or singing, potentially sending COVID-infected droplets into the air.  There was no way to avoid those potential droplets, especially when it’s your job to get close and get good recordings of what they’re saying.

I tried to maintain 6 feet of space between myself and protesters whenever possible. I always wore a mask. But sometimes it was impossible to not be in the middle of a crowd.

Making sure I didn’t get the virus, so I can make smart decisions about whom I see in the days and weeks to come, seemed like a good idea.

When I arrived at the free testing site at the Alliant Energy Center in Madison last Thursday, where any member of the public can show up for a free test, I was told to drive around to the back of the multi-building complex. When I did, I was surprised to see a line of two dozen cars in front of me, given that it was mid-morning on a weekday.

I pulled up to a man in a mask, gloves and a medical gown and rolled down my window. He directed me into one of two lanes of traffic.

In the queue, I looked a little warily at the endpoint: two big, open garage doors in a long industrial building. I couldn’t see the testing taking place inside. I wondered if there was another line of cars beyond those doors, with teams scurrying around administering tests, or if there was just one car pulling into the cavernous building at a time.

I started to get a little nervous. And then felt embarrassed for being nervous.

While in line, two more men in protective gear approached my car and asked me questions: my name, address, phone number and demographic information.

I advanced in line and started wondering: Was the test going to hurt? How long was it going to take? I still couldn’t see inside.

Luckily, the next man who came up to my car, a very jovial guy wearing a camouflage mask, got right to the point.

"There’s no sense in being nervous," he said. "The most they can do is put you in quarantine."

He told me National Guard soldiers would be doing my test and that I could expect my results in about five to seven days. Then he waved me through the garage door.

I could finally see my destination: Three people in medical gowns, masks and gloves were at a long folding table next to a white board that said, "Think positive, test negative!" They’d drawn a simple smiley face next to the words.

The man who I assumed would be administering my test came up to my car. He gave me a tissue and asked me to blow my nose. I complied.

"Alright, I’m going in each nostril for about four seconds, okay?" he said. "It just tickles kinda weird."

Then, he put a long Q-tip-looking thing up one of my nostrils.

There’s really no other way to describe the test than to say it felt like someone put something a little farther up your nose than you’d like. When he did the second nostril, I actually counted in my head. It really was just about four seconds.

Then it was done.

I let out a slightly congested "Woohoo!" because my eyes were watering a little. And then, after bidding my friendly tester a good day, I drove away.

It didn’t hurt. It was just uncomfortable. I’d compare it to getting a shot in the doctor’s office — just a little twinge. Not something you’d exactly do for fun, but definitely not horrible.

The free testing site in Madison will be open for anyone who wants to get tested until at least Aug. 7. For information about testing sites in your area, call your local health department. There’s also a map of local testing sites on the state Department of Health Services website.

Editor's note: This story has been updated to reflect Public Health Madison and Dane County's extended date for free COVID-19 testing to Aug. 7.