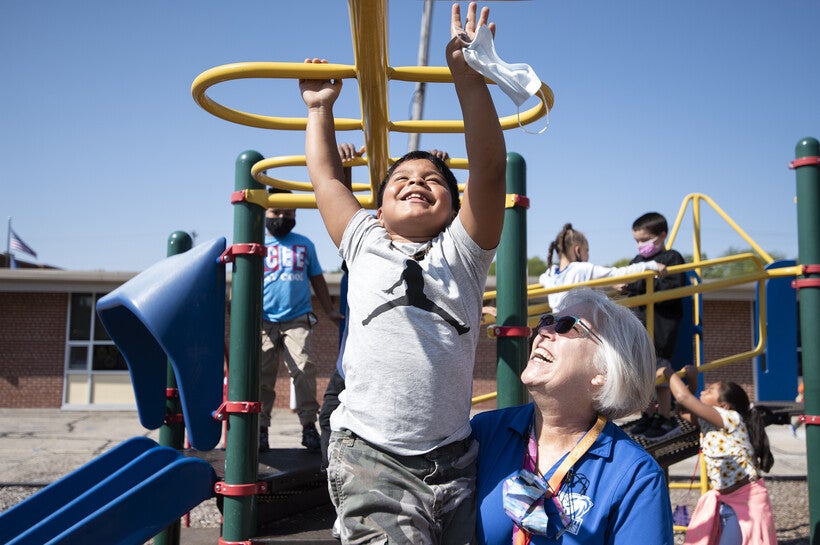 Second-grader Fernando Garcias Berrios holds a face mask as he plays on the playground with help from literacy coach Cindy Weber, right, on Friday, Sept. 17, 2021, at Hackett Elementary School in Beloit, Wis. Mask-wearing is optional when students and staff are outside. Angela Major/WPR

'We just need them to be here': After 18 disrupted months of school, Wisconsin students work to catch up

18 months of disrupted school means students are learning, and re-learning, academics as well as classroom skills
By Madeline Fox
Share:

At the end of the second week of school for Beloit’s Hackett Elementary, first grade teacher Sarah Hoenig gathered her students together after lunch with a read-aloud of "Junie B., First Grader: Boss of Lunch" before getting into her first lesson — letters and sounds.

"B, buh, banana," students called out as Hoenig held up a flash card.

They also added two new letters — C and D — to their rotation on Friday.

"We’re going to go through these kind of quickly because you learned them in kindergarten," Hoenig told the class.

A little review of last year’s lessons is typical at the start of every school year. This year, though, it’s been even more crucial — the School District of Beloit was virtual from March 2020 until May 2021, when students started coming into school buildings two days a week. 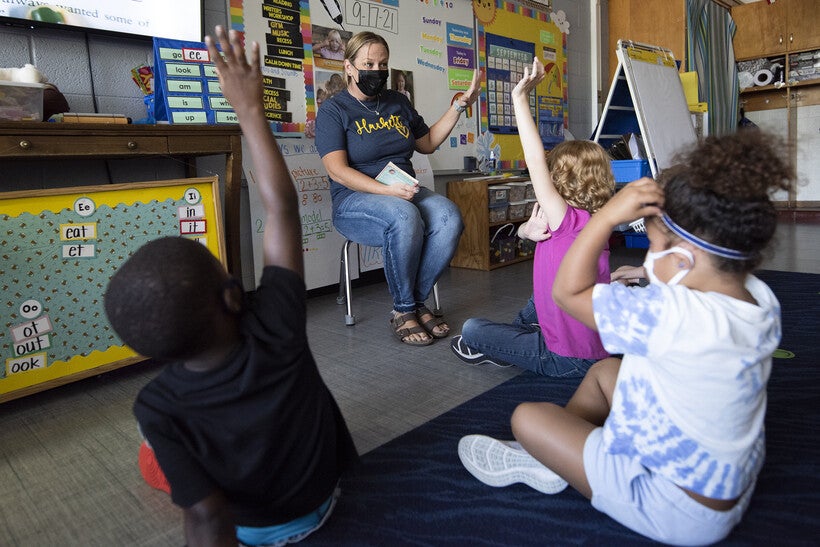 Many Wisconsin schools were virtual or hybrid — half online, half in-person — for part of last year. Even those that kept students in person sometimes had to shut down entire classes or buildings after too many students and staff tested positive to stay open, and many students missed weeks of school to quarantine after a positive test or possible exposure to COVID-19.

At the same time, Wisconsin schools saw a large drop in enrollment last year driven by a reduction in pre-K and kindergarten enrollment, as families kept their littlest ones out of school rather than risk COVID-19 exposure or wrangle virtual learning.

That’s resulted in different levels of readiness from school to school and student to student. With students mostly back in the classroom, schools are trying to figure out where each student is not only academically, but socially.

Hackett Elementary serves kids in pre-K through third grade, so more than half the students have never had a normal, uninterrupted school year — and the remaining students haven't been in the classroom five days a week in 18 months. 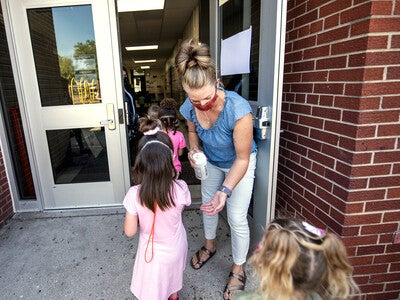 "They came back in the spring for a little bit, but it wasn’t normal in terms of the classroom routines," said Hoenig. "Things take a little bit more time not having last year, but they’re really catching on."

Hackett principal Ryan McReynolds said the school is using accelerated curriculums to make sure students know the basic concepts they need without repeating too much material, or pushing off new material for too long.

"We’re not really focused on deficit — what they didn’t learn — but knowing where a typical first grader would be, honoring that the kindergarten experience probably wasn’t the full kindergarten experience and they probably didn’t get everything they need," he said. "So teaching the first grade curriculum, but also stepping back and making sure we incorporate some of the things that they didn’t quite get last year."

It helps that the students — and the teachers — are excited to be back in person.

"It’s much funner because you can play at recess, and stuff, and do lots of math," said 7-year-old Anniyah Pinson.

Many students said they’re excited about returning to school for typical elementary schooler reasons — they missed their friends, and the cafeteria lunches. Others said they like music class and art, which are more fun with all the instruments and supplies they can use in person. 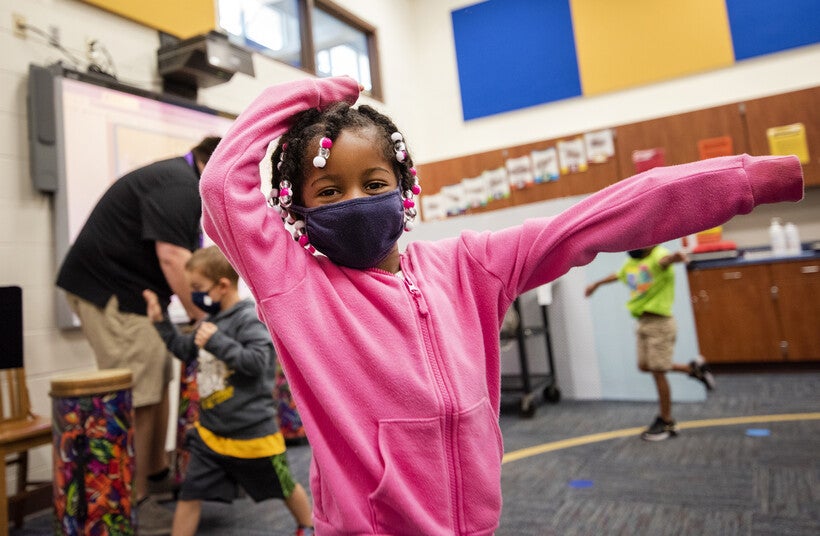 Online learning was challenging, too. Some students said the pace of classes was hard, since teachers couldn’t as easily gauge how well students were keeping up if they had their cameras off or were muted. Staring at a screen for hours of each day was difficult.

"Online we just had to sit and sit, listen and listen," said Ian Murillo, a third grader in Hackett’s dual language immersion program.

Murillo had four other siblings learning from home, often on different class schedules from his.

"My little brother always goes in the bedroom and he just jumps behind and I tell him to not, and to go somewhere else and go do your Zoom," Murillo said. "But he says I have no Zoom, I finished."

Murillo’s teacher for his English-language classes, Jacqueline DeGeorge, said her third graders had a bit of a head start on Hoenig’s first grade class.

"They had already gone to school a couple years," she said. "As far as the routines of school, the third graders in my classroom have adjusted very well."

Some need more work than others to get up to speed academically, though. The school implemented a new reading curriculum this year that has certain kinds of assessments and learning benchmarks incorporated into lessons, so DeGeorge is using those to gauge what students already know.

"It’s not a test in the traditional sense, but built into the assignments and day-to-day interactions with the students," she said. "(They) help us see where students are reading at, and what kinds of things we might need to work on in small groups with them and individually with them." 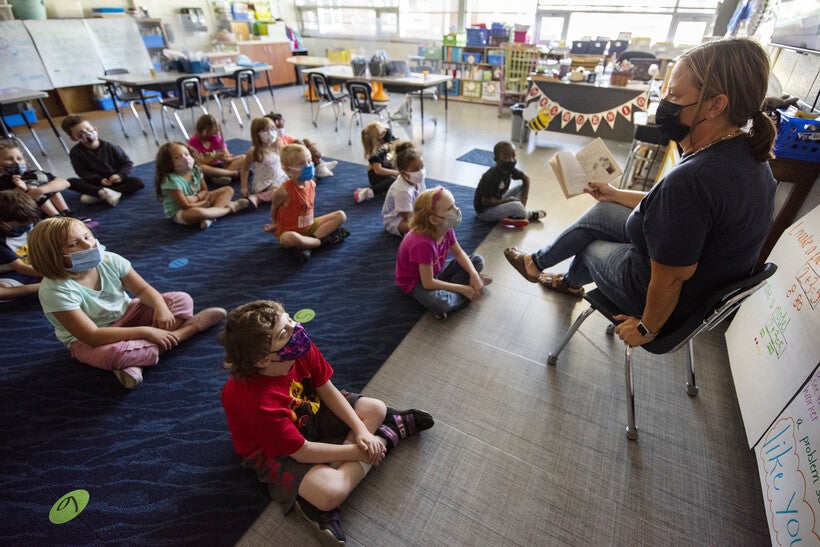 Jessica Frailing, a speech and language therapist at Hackett who works with students one-on-one, said Hackett’s "Responsive Classroom" model has helped ease kids’ transition. The program focuses on community and students’ social-emotional needs. Students at Hackett ate together in their classrooms even before the pandemic, for example, to reinforce the feeling of the classroom as a community.

"You can definitely see in some of their academic skills where they’re having a harder time," she said. "But I think having that sense of community in the classroom they build trust, and they can really start to expose what they don’t know and start to work on it."

The students’ ability to focus, especially on reading, for long periods of time has also suffered a little bit from pandemic disruptions, Frailing said, and they sometimes struggle with staying in one place.

"But you can tell they’re all willing to work on it — they all really want to do their best," she said.

Still, at Hackett and across the state, teachers, administrators and families are still worried about COVID-19 cases forcing students to quarantine or schools to close temporarily. More shutdowns would set them back on the progress they’ve made with students’ academics and their social skills.

Every student in Hoenig’s class is assigned a number that corresponds to their place in line, to a dot on the rug at the front of the room where they go over their letters and sounds, and to their seats, in order to keep the same kids clustered together and minimize exposure. The school district is requiring masks for everyone, regardless of their vaccination status.

Principal McReynolds keeps hundreds of kid-sized masks in his office for those who forget, lose or damage their masks. On the second Friday of classes, he ran several down to the music room for a few kindergartners who had lost theirs sometime between lunch and class. 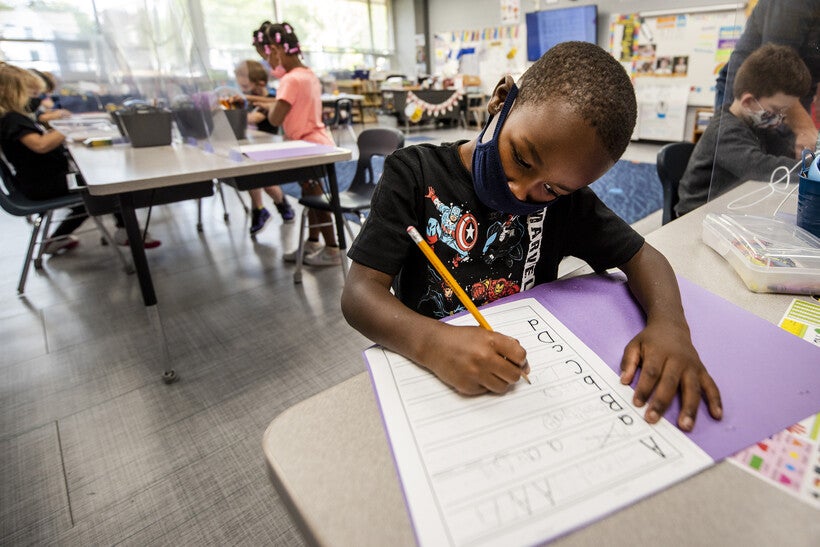 "Everything’s gonna come with time, kids are gonna get what they need," he said. "As long as they’re here, we’ll take care of what we need to take care of, we just need them to be here."

So far, Beloit's mitigation techniques are working. The school dashboard showed 22 active COVID-19 cases as of Thursday, with two cases reported at Hackett.

Hoenig said she’s hoping for an uneventful school year, free of closures or quarantines. Still, she said, the difficulties of virtual learning did have one silver lining — parents and family members got much more involved in their kids’ learning, and got used to sending and receiving messages on the digital platform teachers use to post class information. Hoenig said she still posts photos and little blurbs describing what they’ve worked on throughout the day to keep families in the loop.

"The kids are just so excited to be here that I think anyone is willing to do anything to be back to somewhat normal," she said. "The kids adjusted to wearing the face mask far better than ever expected — they go with the flow, they’re kids."