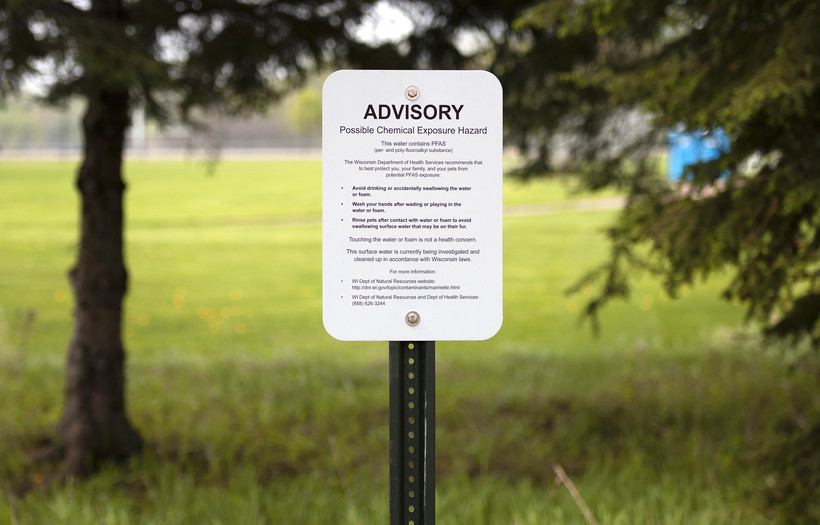 Environmental and citizens groups are looking to get involved in a legal dispute between the Wisconsin Department of Natural Resources and the state's largest business association over how state regulators address PFAS contamination. They fear the lawsuit could undermine a state environmental law that protects communities dealing with the so-called forever chemicals.

In February, Wisconsin Manufacturers and Commerce and Oconomowoc-based dry cleaner Leather Rich filed a lawsuit against the DNR, agency Secretary Preston Cole and the Natural Resources Board. The business group claims the DNR is overstepping its authority by requiring businesses to investigate and clean up PFAS chemicals.

WMC argues the agency has no "explicit authority" to enforce any standards or requirements regarding PFAS in state cleanup programs while the DNR has said it has authority to require testing under the state’s spills law.

On Monday, Midwest Environmental Advocates, a nonprofit law center, filed a request to intervene in the lawsuit on behalf of multiple environmental groups, including the River Alliance of Wisconsin, Citizens for a Clean Wausau, Clean Water Action Council of Northeast Wisconsin, Wisconsin Environmental Health Network and Marinette resident Doug Oitzinger. They say they want the opportunity to defend the state’s spills law in court.

"The spills law is the only meaningful protection that the state has to protect Wisconsin communities from PFAS. In fact, the federal government currently does not have meaningful regulatory protection," said Tony Wilkin Gibart, executive director of Midwest Environmental Advocates.

The U.S. Environmental Protection Agency has yet to develop PFAS standards, although it has issued a health advisory level of 70 parts per trillion. In the meantime, Wisconsin is crafting its own PFAS standards for drinking water, groundwater and surface water. That process could take another year to develop. State health officials have proposed a groundwater standard of 20 parts per trillion for six PFAS substances that include the two most common PFAS chemicals: PFOA and PFOS.

Dr. Beth Neary, co-president of the Wisconsin Environmental Health Network, said she’s become increasingly concerned about the health effects of PFAS because they don’t break down easily in the environment, and they can stay in the body for long periods of time.

"A ruling in this case that favors WMC and undermines the spills law would have devastating consequences for the health of Wisconsinites," said Neary.  "We simply cannot allow that to happen."

Residents in the town of Peshtigo and city of Marinette have been drinking bottled water for years after being exposed to elevated PFAS levels in their private wells stemming from Tyco Fire Products’ fire training facility in Marinette. The company is part of the state’s largest, most complex investigation into PFAS contamination.

The Marinette manufacturer conducted testing and training with firefighting foam that contains PFAS at its 380-acre facility from the early 1960s through 2017. Town of Peshtigo residents who live in an area that includes roughly 270 households are receiving a $17.5 million settlement from Tyco after being exposed to the chemicals. The DNR recently gave conditional approval of the company’s plans to address PFAS contamination in groundwater through construction of a groundwater extraction treatment system at its facility.

"The idea that the spills law could be gutted, and that we would return to a time when polluters weren't held accountable for cleaning up contaminated soil and water is unthinkable," said Dean Hoegger, executive director of Clean Water Action Council of Northeast Wisconsin.

PFAS contamination has been identified at more than 70 sites statewide, including sites in Marinette, Superior, La Crosse and Madison. Allison Werner, executive director of the River Alliance of Wisconsin, lives two blocks from Starkweather Creek. The Madison waterway has been under a fish consumption advisory after elevated PFAS levels were found. Werner said she and her family no longer feel safe fishing or swimming in the creek.

"The DNR is overseeing remediation efforts to remove PFAS from Starkweather Creek, and, if they are successful, my family will feel safer using the creek again," said Werner. "However, if the plaintiffs prevail in this lawsuit, the DNR will lose the authority it requires to help my family and thousands of others in Wisconsin who are impacted by contaminated water and soil."

The impact of the legal challenge could pose wide-ranging impacts for communities affected by more than just PFAS, according to Tom Kilian with Citizens for a Clean Wausau. His group has worked to address environmental contamination from a range of chemicals at sites within the city. He fears the lawsuit would compromise the DNR’s ability to direct polluters to clean up contamination.

"Regular folks would be forced to figure out how to deal with soil and water contamination on their own," said Kilian.

Scott Manley, executive vice president of government relations for WMC, fired back at environmental groups in response to the allegations on Monday. He accused the groups of resorting to scare tactics and misinformation regarding the lawsuit.

"Our lawsuit is really simple: if the DNR wants to regulate something, they need to stay within their lawful authority and set standards in rules like every other agency in Wisconsin is required to do," said Manley in an email. "Businesses deserve to know the rules of the game, and they deserve to have those rules in writing. The law requires no less, and our lawsuit asks that the DNR do nothing more than follow the law.  Everyone else is expected to follow the law, and the DNR should be no exception."

The business group has asked the court to issue a ruling that the DNR created an unlawfully adopted rule when it issued an interim decision that required businesses to test for PFAS before they could successfully complete remediation of a site under a voluntary cleanup program. They want a judge to declare that policy along with certain PFAS standards for cleaning up contamination as "invalid and unenforceable."

WMC has said they’re not asking the court to bar the DNR from regulating emerging contaminants like PFAS, but the business group argues the agency should follow the state’s rulemaking process for developing and enforcing standards. The business group has asked the court to force the DNR to come up with a list of hazardous substances as part of that process, including quantities and concentrations at which those substances would be considered hazardous.

"(D)efendants require that any person discharging a hazardous substance report it immediately, or be subject to significant environmental liability and penalties," said WMC in its complaint. "Without knowing how defendants define hazardous substance, it is impossible for a party to know when they are required to report the discharge or discovery of any particular substance as a hazardous substance spill. Defendants essentially expect the public to read their minds in order to determine what should be reported."

Gibart of Midwest Environmental Advocates argued the DNR would lack authority to regulate many substances until any rule outlining those substances was put in place, adding that the rulemaking process can take more than two years under the best circumstances. He feared that interference from the Republican-controlled Legislature may also prevent any such rule from moving forward.

Gibart pointed to GOP lawmakers who weakened an emergency rule in December to enforce requirements under a law that bars the use of firefighting foam except in emergencies and limited circumstances. He added that recent action by the Legislature's Joint Finance Committee to strip Gov. Tony Evers' proposal to provide positions and funding for communities to address PFAS under the DNR's budget shows lawmakers "are not sufficiently prioritizing public health and addressing PFAS."

He also indicated that WMC is proposing a solution that would fall under the REINS Act, which prevents any rule from moving forward if the cost of compliance exceeds $10 million in a two-year period.

The legal implications of the case aren’t likely to be decided for months. WMC has also filed a separate lawsuit against the DNR over PFAS sampling at industrial and municipal wastewater treatment facilities. Midwest Environmental Advocates has no plans to intervene in that lawsuit at this time.