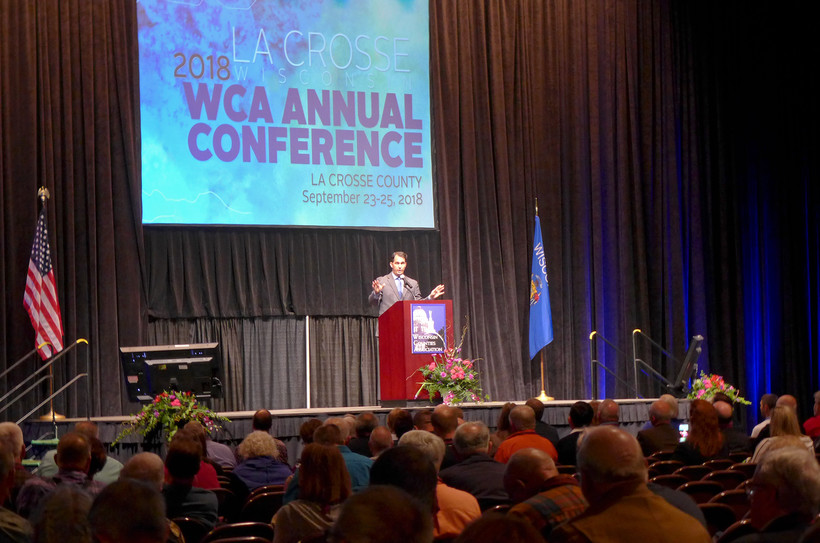 Gov. Scott Walker is promising to increase annual road funding for counties in the next state budget.

During an address at the Wisconsin Counties Association conference, Walker said he would increase the General Transportation Aids program to cover 30 percent of costs faced by counties if re-elected in November.

He said finding the additional funding in the budget was a "matter of priorities."

"By not having massive new projects, a new interchange for example, to work on, that frees up money to spend elsewhere in the state and we wanted to make sure our partners in county government were getting a huge portion of that," Walker said.

If elected, Evers said he would bring together stakeholders to create new transportation policy.

Walker said the lack of details about Evers’ plan "should be a warning to every tax payer."

Walker said his proposal would be the largest dollar amount and the largest percentage counties have ever received in general transportation aids.

Tara Johnson, chair of the La Crosse County Board, said the state should have been covering 30 percent of road costs all along.

"The disconnect is we have been needing 30 percent of costs for the past 20 years, more than that," Johnson said.

Johnson said she’s grateful for the governor’s proposal, but it won’t solve the unmet infrastructure needs that have piled up over the years.

Johnson estimates La Crosse County would receive an additional $1.3 million to $1.4 million under the governor’s proposal. But she said the county currently has $101 million in unmet repair and maintenance costs.

"If it happens, if the Legislature approves it, if the governor signs a budget that includes his proposal in it, if he’s still in office — there are a lot of ifs — then we are going to get one urban mile or maybe three rural miles when we have hundreds of miles," Johnson said.

Ray Ransom, chair of the Jackson County Board, said roads in his county are on a 100-year replacement cycle. He called the governor’s proposal "long overdue."

"I’m glad that we’re seriously taking a look at our roads now and hopefully regardless of who wins the gubernatorial election, this will continue on, this discussion," Ransom said.

Ransom said poor road and bridge conditions have an economic impact on rural counties, preventing producers and businesses from getting their product to consumers.

"Nobody likes new taxes, but I think we really have to take a look at probably adding a gas tax on and perhaps some other things. We have other infrastructure needs that are not being met," Ransom said.