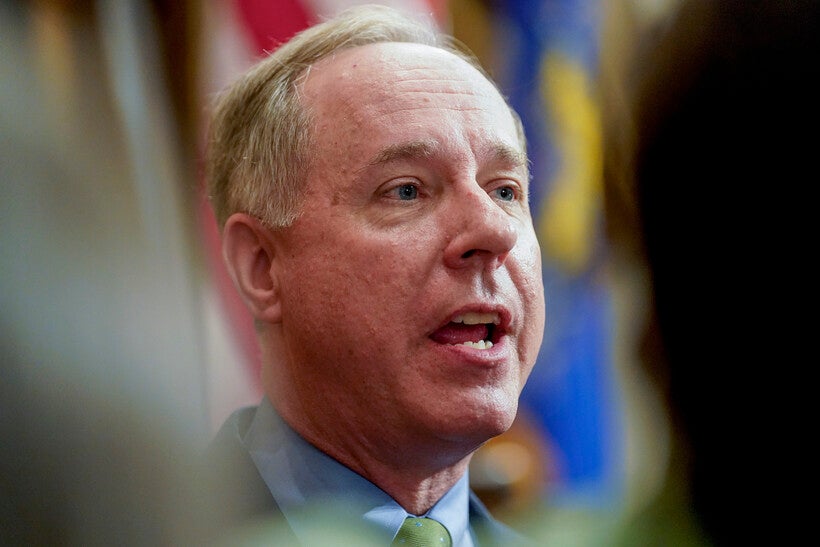 Wisconsin Assembly Speaker Robin Vos talks to the media after Gov. Tony Evers' State of the State speech at the state Capitol on Feb. 15, 2022, in Madison, Wis. Andy Manis/AP Photo

Vos reelected Assembly Speaker, says it's time for GOP to move on from Trump

Vos also floated the idea of a compromise to clarify the state's abortion ban but was short on details
By Shawn Johnson
Share:

After spending the past year at odds with Donald Trump, Robin Vos will be Speaker of the Wisconsin Assembly again. And Vos thinks it's time for Republicans to move on from the former president.

Vos easily won reelection Tuesday night against a write-in campaign from Adam Steen, the Republican he narrowly defeated in the August primary. Trump endorsed Steen in both elections, promoting him at a Wisconsin rally in August and in a robocall in November.

Some of Trump's most prominent endorsements around the country also lost Tuesday, including in Wisconsin where Republican Tim Michels lost to Democrat Tony Evers in his bid for the governorship. The GOP's performance in the midterm led many Republicans to call for a different candidate to run for president in 2024. On Thursday, Vos joined them.

"We have to be smart enough to say, 'I want to win,'" Vos told reporters at the state Capitol. "I can't stick with one person and ride the ship down.'"

Vos spoke after being reelected speaker in a closed door meeting of Assembly Republicans. Last session, he led a 61-seat majority in the Assembly. Next session, that majority will stand at 64.

Asked if he thought Trump's attacks against him — including calling him a RINO ("Republican In Name Only") — would hurt his ability to be speaker, Vos said he worried about that initially. But he said people in his district know him.

Vos said the Republicans he'd talked to universally liked Trump's record as president, but not the way he carried himself.

"So maybe if we could find somebody who has the same views and is able to get things done but has the ability to control themselves," Vos said. "That might be a better answer."

Vos will again lead the Republican opposition in Wisconsin after Evers won election to a second four-year term.

While their adversarial relationship is likely to continue for the next four years, Vos spoke briefly about issues the two sides might address next year.

Democrats relentlessly attacked Republicans during the campaign on the issue of abortion after the U.S. Supreme Court struck down Roe v. Wade. Some Republicans have conceded the issue motivated Democratic voters, and particularly young voters.

In Wisconsin, the Supreme Court's decision reinstated an 1849 ban on abortions. The ban includes no exceptions for rape or incest, though it does allow for an abortion to save the life of a mother.

During a radio interview earlier Thursday, Vos suggested passing some kinds of changes to the law, although he wasn't specific.

Asked about the possibility Thursday night, Vos said he hadn't had that discussion yet with members of his caucus, but he laid out his views on what he'd like to see.

"I believe in the exceptions for rape and incest," Vos said. "I think we need to make sure that the definition of life of the mother is as clear as it can be so, again, we don't have a court later on litigating what that is. I would like to make sure we all know exactly what the law is going forward."

When Evers was asked about abortion on Wednesday, he said he thought a compromise on abortion wasn't possible in the Legislature.

"I don't see a way to solve this legislatively," Evers said Wednesday. "I think it's going to have to happen in the courts." 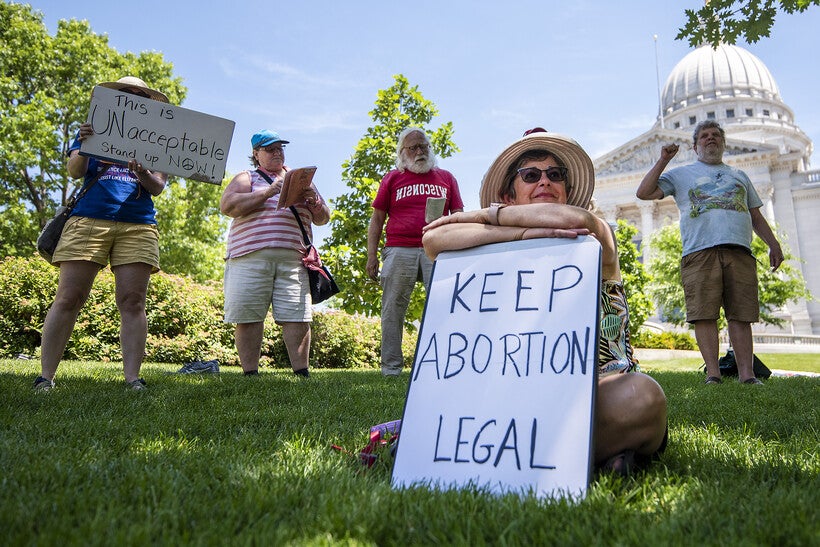 Donna Volk sits in the grass with a sign as members of the solidarity singalong Friday, June 24, 2022, outside of the Wisconsin state Capitol in Madison, Wis. Angela Major/WPR

Schools and the budget

Vos also said Thursday that he thinks Republicans could reach a compromise with the governor when it comes to school funding as long as Evers agrees to come their way on the issue of private school vouchers.

"If he wants more money for schools, we have to have some reform along the way," Vos said. "We're not just going to write a blank check."

Vos said he wanted "universal school choice" in Wisconsin, an issue Michels talked about frequently in his unsuccessful run for governor.

"I don't necessarily have one definition of what that should look like," Vos said.

Evers vetoed a bill last session that would have lifted all enrollment and income caps for the private school voucher program.

In addition to Vos, Assembly Republicans elected Rep. Tyler August, R-Lake Geneva, to be the next Assembly majority leader.