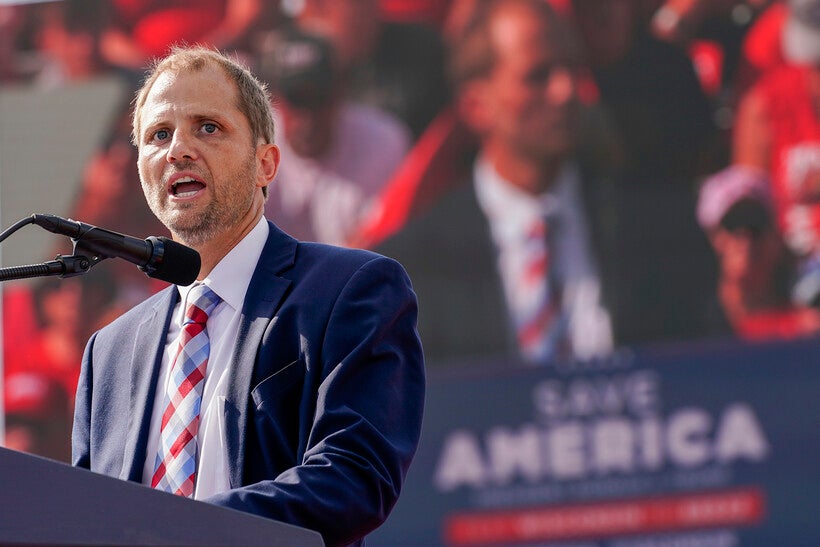 After losing to Assembly Speaker Robin Vos in the August primary election, Republican Adam Steen has announced he will run as a write-in candidate in November.

Steen addressed a crowd of supporters in Burlington on Thursday, in which he said "the future of our country is at stake."

"This is not just an Assembly seat. This is the direction of our country," Steen said to a chorus of cheers. "I want the people to be able to choose their election representatives, I want them to know the truth about the people that are going to represent them."

Just a week before the August primary, Steen was endorsed by former President Donald Trump. That propelled him from political obscurity into the spotlight.

The endorsement and an ongoing feud between Vos and Trump, led to one of the Speaker’s closest elections yet for the the 63rd Assembly District seat. Vos defeated Steen on Aug. 9 by a narrow margin of just 260 votes. Vos has routinely won reelection in the heavily-Republican district by 20 points or more, and hasn't faced a primary challenger in recent years.

In a statement following Steen’s announcement, Vos reiterated that voters had already made their choice.

"Now that voters have rejected him, he apparently can’t take 'no' for an answer," Vos said in a written statement. "He seems intent on re-litigating the primary election he lost, just like he wants to do with the 2020 election."

Much of the primary campaign focused on demands from Trump and his allies to decertify the 2020 election — something election experts say is legally impossible. Vos has been on the receiving end of intense blowback for rejecting calls to overturn the 2020 election.

"I still believe that the Constitution and my oath that I took as an elected official does not allow me to decertify any election whether I want to or not," Vos told reporters in March. "That's not going to happen."

Still, Vos hired former state Supreme Court Justice Michael Gableman to lead an investigation into the 2020 election. His investigation has not provided any evidence of widespread fraud and has been caught up in a series of legal challenges. Several other audits have found no evidence of wrongdoing in the election, in which President Joe Biden won Wisconsin by about 21,000 votes.

Tension between Vos and Gableman have grown over the last several months, with the former justice endorsing Steen one day before the primary election. Days later, Vos fired Gableman and closed the election investigation altogether.

Steen slammed Vos for "discrediting" Gableman and lauded his work that culminated in a 136-page final report the Office of the Special Counsel released in early March.

The August primary was Steen's second run for office. In 2018, he came in fourth in the Republican primary for the First Congressional District, with just 10 percent of the vote.

Even with Steen’s announcement, Vos will not face a named candidate on the November ballot. There is also no Democratic challenger to represent the Racine County district.