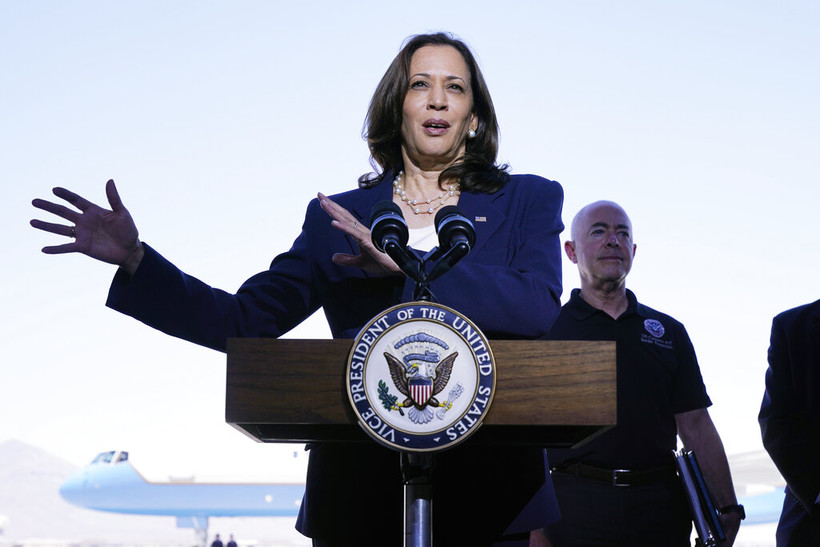 Vice President Kamala Harris will visit Milwaukee on Thursday to "engage with young Americans and meet with local Latino leaders," according to a statement from the White House.

"Vice President Harris, who previously served as California’s Attorney General, has been a national leader in protecting reproductive rights. Our Democratic Attorneys General are on the frontlines of the fight to protect public safety, reproductive rights and much more, and we’re proud to work with the Biden-Harris Administration across the country," said a statement from Geoff Burgan, a spokesperson for the organization.

The exact details of the trip aren't yet known, but it will be her third visit to Milwaukee since becoming vice president. She visited Milwaukee in January to push for lead pipe replacement. She also visited Milwaukee in 2021 to promote President Joe Biden's $2 trillion jobs and infrastructure plan.

Harris' visit also comes two weeks after Biden visited Milwaukee to speak at the city's Laborfest. In his speech at that event, Biden spoke about the importance of labor unions and called out "extreme MAGA Republicans."

Paru Shah, a political science professor at the University of Wisconsin-Milwaukee, said she’s not surprised by the visit given the fact that Wisconsin is a swing state.

"We’re 50 days away from the election," Shau said. "Wisconsin continues to be an important state, both at midterm elections and it will be as well for presidential elections."

Shau also said Harris' plans to meet with Latino leaders is not a surprise. On Sunday, a New York Times/Siena College poll found that while Latino voters still favored Democratic candidates, the party's popularity among Latino voters has waned in the years since the 2020 election.

In Wisconsin, support for former President Donald Trump has also increased among Latino voters in recent years. A poll from Latino Decisions showed Latino support for Trump in 2016 was at 10 percent. In 2020, that figure increased to 22 percent.

"Really, I think this is part of a larger national strategy to rethink how outreach to Latino voters happens and making sure that it does happen and not making assumptions about which party large groups of individuals will actually vote for," Shau said.

Christine Neumann-Ortiz, executive director of the immigrant rights group Voces de la Frontera, said they put in a request to speak with Harris during her visit. The group met with Harris while she was campaigning in the city in 2020.

Neumann-Ortiz said the vice president's visit is timely given the recent move by Republican Gov. Ron DeSantis to transport migrants from Texas to Martha's Vineyard, Massachusetts. Harris called out DeSantis Friday for what she said was a "dereliction of duty," during an interview with VICE News.

"I hope she will ... continue to use her platform to condemn this right wing Republican strategy, as far as the mistreatment of refugees and continue to address the need for immigration reform for immigrants and essential workers who have been here for decades," Neumann-Ortiz said.