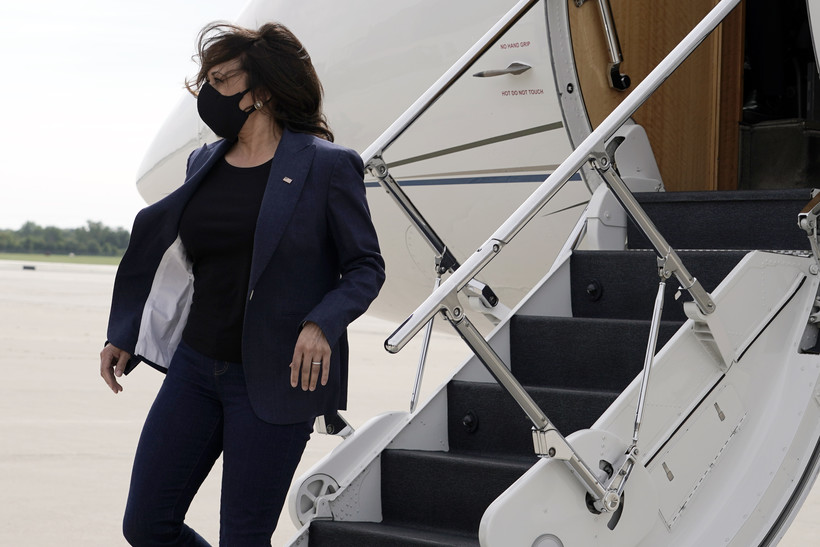 Two years ago, doctors told Milwaukee mother Deanna Branch her repeated exposure to lead would keep her on dialysis for the rest of her life and she would likely not walk again. Her 6-year-old son, Aidan, had already been hospitalized twice for lead poisoning by then.

Recently, Branch finally moved to a safer apartment, and she and Aidan were able to overcome their physical ailments. They wrote about their struggles in a picture book. And on Monday, she shared her story with Vice President Kamala Harris.

"I’m standing, I’m talking, I have my voice back, and I’m here, and I’m able to share my story, Aidan’s story with the world," Branch, holding back tears, told Harris on Monday. "Super Aidan, the lead-free superhero now flies all over Milwaukee teaching children to fight the evil Lead Monster by only eating leafy green vegetables, washing his hands and only drinking lead-free water."

Harris was in Milwaukee highlighting a plan to accelerate the goal of removing and replacing all lead pipes in the United States in the next 10 years. The city has about 70,000 lead pipes. Wisconsin has 170,000, mainly in rural and poor areas, Harris said.

"A day in the life of a child is a very long time," Harris said. "We are long over due to get this done. And generations of Americans will benefit because of the work that is being done in Milwaukee." 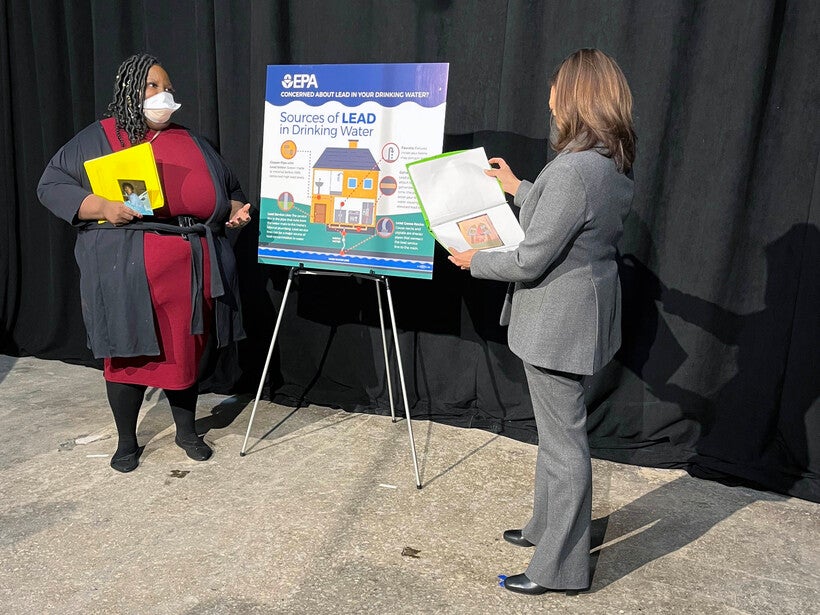 Deanna Branch of Milwaukee, left, speaks to Vice President Kamala Harris, right, about the impact of lead pipes in her life. The health of Branch and her 6-year-old son has been impacted by lead poisoning. They wrote about their struggles in a picture book. Harris was a the Wisconsin Regional Training Partnership/Building Industry Group Skilled Trades Employment Program building in Milwaukee on Monday, Jan. 24, 2022. There, she highlighted a plan to accelerate the goal of removing and replacing all lead pipes in the United States in the next 10 years. The city has about 70,000 lead pipes. Corrinne Hess/WPR

Harris was joined Monday by Environmental Protection Agency Administrator Michael Regan and the two spoke with Rashawn Spivey and Kylen Lenoir, who replace lead pipes through Hero Plumbing, based out of Milwaukee. Spivey founded Hero Plumbing in 2010.

Regan said Black children living at or below the poverty level are four times more likely to have elevated levels of lead in their blood.

"This is an injustice that affects cities and small towns," Regan said. "It is a moral imperative for each of us that no child is forced to drink lead in their water. There is no safe level of lead."

Jamie Ferschinger, director of environmental health at Sixteenth Street Community Health Centers, and Dr. Heather Paradis, a pediatrician at Children’s Wisconsin, told Harris and Regan on Monday that children exposed to lead sometimes have no symptoms at the time, but later develop growth and learning problems.

Exposure to lead is most harmful to children, especially under the age of 6. The Centers for Disease Control and Prevention warns lead exposure can cause damage to a child’s brain and nervous system, slow growth and development and cause problems with learning, behavior, hearing and speech. And the Environmental Protection Agency reports there is no known safe level of lead in a child's blood.

Wisconsin Watch previously reported that 9,600 Wisconsin children younger than 16 were poisoned by lead between 2018 and 2020. Of lead-poisoned children in the state, nearly two-thirds live in Milwaukee County.

The pandemic also led to a serious decline in children being tested for blood-led levels, with 23 percent fewer children tested for lead between 2019 and 2020, according to Wisconsin Watch.

In a press release, Harris noted that up to 10 million U.S. households connect to water through lead pipes and service lines, and 24 million housing units have significant lead-based paint hazards. The press release also stated that those living in low-income communities and communities of color are disproportionately exposed to lead risks.

Wisconsin is expected to receive more than $48 million for lead pipe abatement in 2022. In Milwaukee alone, the cost to replace lead pipes on all public and private property is estimated to be $800 million.