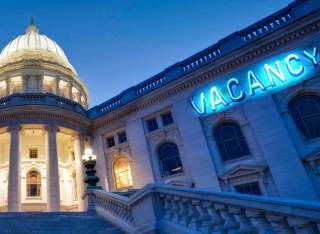 A Tradition Of Special, And Swift, Elections In Wisconsin

When Michael Slattery traveled to Madison with the Wisconsin Farmers Union on Wednesday his state Senator's office was empty.

"There was no office for Sen. (Frank) Lasee because he resigned," Slattery said.

In late December, Lasee, a Republican from De Pere, announced he was leaving to tak on the role of administrator for the state Department of Workforce Development Worker’s Compensation Division

Slattery, who has a farm outside of Maribel, was disappointed that he had no one to listen to his concerns over things like water quality and rural broadband.

"We had no chance to represent or advocate for the positions that we want (our legislators to take)," he said.

In January, Gov. Scott Walker said he wouldn’t call for special elections to fill the seats, saying it isn’t necessary because the legislative session is coming to an end.

But Sen. Dave Hansen, D-Green Bay, says there could be a special session at some point between now and November’s general election.

"It will be two months next week that the people (Lasee) left behind are without someone representing them in the Senate," Hansen said at a news conference Thursday in De Pere.

Hansen represents Senate District 30 which neighbors the district Lasee left. Hansen said Senate District 1 —  which encompasses Door County and parts of Brown, and Kewaunee counties — residents are calling him about issues they care about or to fill in for ceremonial duties, like giving residents awards, in Lasee's absence.

Even if a special election did take place he said the new representative or senator wouldn't be sworn in until mid-January of 2019, leave the 175,000 residents of District 1 without representation for more than a year.

It’s unprecedented in Wisconsin to have such long legislative vacancies.

Hansen suspects the outcome of the special election to fill the 10th Senate District vacancy in western Wisconsin has something to do with Walker’s refusal to hold additional special elections.

Republicans held the 10th for 17 years before Schachtner's win — an upset seen as an early bellwether on November’s mid-term congressional races.

"I think they were pretty sure the Republicans would win," Hansen said. "It is a district that Trump won by 17 points. It did not happen, so now (Walker) is deciding maybe a special election isn’t such a good idea."