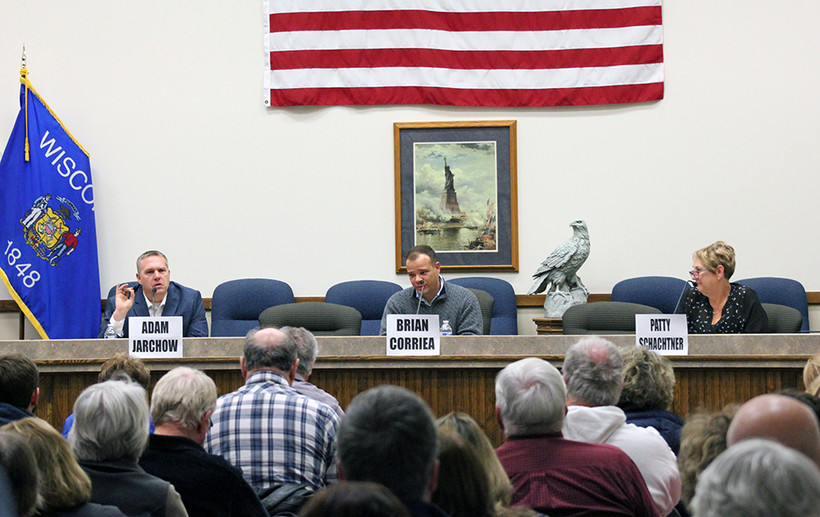 On Tuesday, voters in far western Wisconsin will choose a new state senator after Republican Sheila Harsdorf resigned her post to join Gov. Scott Walker's cabinet in November. The special election for the 10th State Senate seat has been short, crowded and competitive. It’s also being closely watched by political junkies as a test of whether a democratic wave is rising in Wisconsin.

The 10th State Senate District runs from the City of Menomonie along Interstate-94 to River Falls. Then it stretches north, running 90 miles along the Minnesota border. It’s a unique blend of rural, agricultural land and sprawling suburbs of the Twin Cities.

For the first time in 17 years, the seat is wide open and a field of six candidates has been narrowed to a three-way race. Republican State Rep. Adam Jarchow, of Balsam Lake, represents the northern part of the 10th State Senate District. He’s become known as an aggressive advocate for private property rights in the face of local zoning and environmental protections. He’s also bucked his party and Walker by voting against the state budget and the $3 billion Foxconn incentive package.

At a candidate forum in New Richmond, Jarchow painted a rosy picture of economic development on the heels of Republican property tax and regulatory reforms. Democrat Patty Schachtner, of Somerset, is the St. Croix County medical examiner and has served in various local government roles. Her campaign has painted her as a pro-Second Amendment, bear-hunting public servant.

At the same forum in New Richmond, she said lawmakers have focused more on wealthy business owners than blue collar workers. She said the Legislature needs to do more for education and local economies. Libertarian Brian Corriea, of Wilson, has labeled his campaign as a free pass for voters put off by the major parties.

"As a third party candidate, I’m running because I feel like we need more diversity in politics, I think we need more voices," said Corriea.

The battle over the 10th State Senate seat has heated up in the final week of the campaign, and donations have poured in from within the district and beyond.

According to the most recent reports from the state Ethics Commission, Jarchow has raised nearly $271,000 and spent more than $225,000. Schachtner has raised just over $196,000 spending just more than $133,000. Corriea was not required to submit a finance report because he did not raise more than $2,000.

While Republicans have traditionally done well within the 10th State Senate District, there is a question of whether recent Democratic wins in special elections in places like Alabama and Virginia could signal a rising wave of enthusiasm on the left. Jim Bender is a former chief of staff for Republican Senate Majority Leader Scott Fitzgerald, of Juneau, and a close follower of state politics. He said western Wisconsin is full of swing voters that could flip the seat.

"I think that the biggest question is, that group of people, that block of people that are willing to be nonpartisan and really try to push from the outside in … are they engaged in this race or does this end up kind of being your traditional Republican versus Democrat?"

Bender said that kind of turnout would likely mean a win for Jarchow.

Because of it’s proximity to Minnesota, residents are part of the Minneapolis and St. Paul media market. Bender said that makes political advertising cost-prohibitive for Wisconsin candidates.

"But that makes the 10th Senate District something of a media anomaly for the state of Wisconsin in that it’s not really reachable by TV in the way that other Senate districts traditionally are," said Bender.

Gary Goyke is a former Democratic-state-senator-turned-lobbyist who was elected during a democratic wave in 1974. He said the key for reaching voters in the district is direct mail, social media and door-to-door canvasing.

"But this is a battle on the ground and in the mailboxes and the social media of the district and it’s pretty hard to judge at this point in the next week what that’s actually going to do," said Goyke.

He also said that while campaigns may want to believe that this election is strictly a local affair driven by support of their candidates, he believes there are national forces at play in this special election.

"There will be people voting in those elections that want to send a message that isn’t about Patty, or isn’t about Adam, it’s about their feelings and about making a statement," Goyke said.

As the candidate forum in New Richmond let out, Rita Keating, of Star Prairie, said she’s supporting Schachtner. She said her and Schachtner believe in many of the same things, but Keating said she also wants to oust Republicans after the election of President Donald Trump.

"I don’t like the way the country is going right now. I was very complacent during the 2016 presidential election and it will never happen again," said Keating.

John Kraft, of Roberts, who was also at the forum, is a supporter of Jarchow, but said the Democrats have run a good candidate. He hasn’t seen any evidence that resentment against Trump or congressional Republicans is making a major difference on the ground in the 10th State Senate District.

"I’m sure the Democrats will see it that way should Patty get in and they would love nothing better than to flip that seat in the Senate, obviously," said Kraft. "But because Gov. Walker really put this thing on an accelerated timeframe, I don’t see that as really being a decent measure of what may happen in 2018."

This district has grown increasingly conservative over the years. Trump won it by about 17 percentage points in 2016. Harsdorf won it by 26. Tuesday's election could gauge whether political winds are shifting and pushing a democratic wave into November 2018.