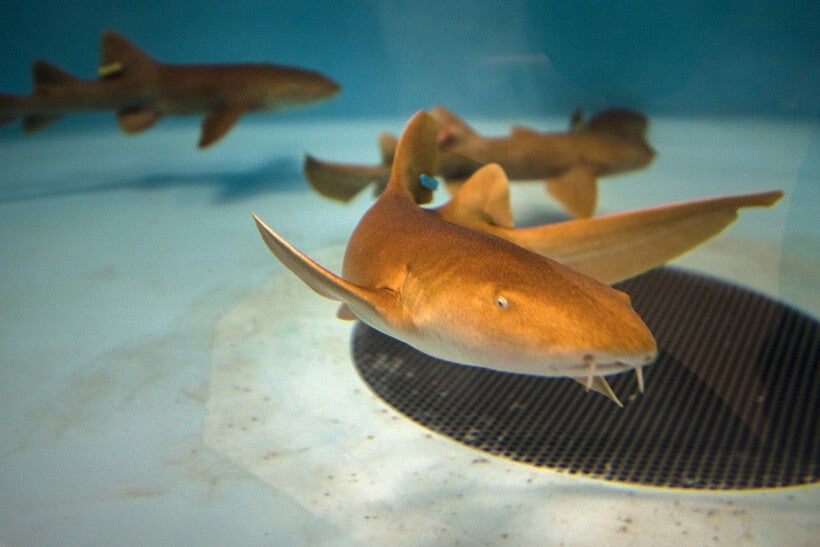 A nurse shark used for research swims in the bottom of a tank Friday, Dec. 17, 2021, at a research facility. Angela Major/WPR

In an aquatic lab in Madison, four juvenile nurse sharks are living up to their name. They’re providing treatment for COVID-19.

Researchers at the University of Wisconsin found that antibody-like proteins from sharks are highly effective at neutralizing coronaviruses, according to a new study published this month.

"Sharks have very unique immune systems and antibody structures," said Aaron LeBeau, a UW-Madison professor of pathology and laboratory medicine who helped lead the study. "They basically can do in a very small protein what a huge human antibody can do in a large protein."

LeBeau and his lab at the UW School of Medicine and Public Health teamed up with researchers from the University of Minnesota and the Scottish biotech company Elasmogen to develop these shark antibodies for therapeutic use. And while it won’t be immediately available for treatment in humans, developing the technology now could prove useful for future outbreaks.

"It's possible that the shark antibodies can be used in the future for other coronavirus outbreaks, as well as coronavirus variants," said LeBeau. 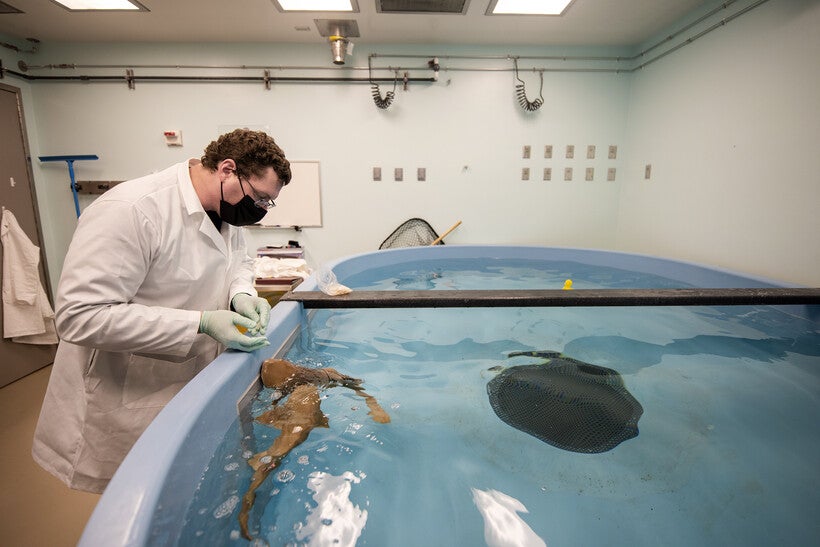 Elasmogen CEO Caroline Barelle said the technology was first developed at the University of Aberdeen in Scotland, where she and other scientists were studying the oldest vertebrates that had an adaptive immune system similar to humans, with specialized antibodies.

After launching Elasmogen in 2016, Barelle and her team built a library with hundreds of thousands artificial shark antibodies — the first of its kind. Across the ocean, LeBeau was just getting into shark antibodies after doing cancer research in llamas, who have a similar immune system.

"It was this discovery that sharks, or elasmobranchii — that's where the name Elasmogen comes from — have this kind of quirky little antibody that's part of the adaptive immune system," Barelle said.

Part of what makes shark antibodies so unique is their size. They are one-tenth the size of human antibodies, Barelle said, so they are really effective at wedging into all the nooks and crannies of a disease molecule.

"They bind better, they engage their target better than most human antibodies," said LeBeau. "We like to say you get more bang for your buck. They're small, but they're good."

Because shark antibodies are so precise, they can neutralize a virus without damaging the host cells. And they are used to surviving in the harsh environment of urea-rich shark blood.

"Shark antibodies are almost indestructible. You can boil them and they still work," LeBeau said.

This means that treatments using shark antibodies could be easier to store and distribute. Current COVID-19 vaccines and treatments have to be kept at very cold temperatures, which makes it difficult to deliver them to all parts of the world.

A few years ago, one of LeBeau's graduate students happened to meet Barelle at a conference in Lisbon and was amazed by her research.

Then in March 2020, Barelle and LeBeau finally met at conference in London. At the time, they were both focused on using shark antibodies in cancer treatments.

"But then this virus raised its ugly head, and it was just kind of all hands to the pump. Let's see what we can deliver on this because this matters right here right now for everybody," said Barelle.

Elasmogen received a research grant from the Scottish government and Barelle immediately pulled LeBeau in. She had the expertise and extensive library of antibodies, and he had the ability to test them. LeBeau said overnight, he went from studying cancer to studying COVID-19.

Elasmogen screened their entire library of shark antibodies against the proteins found in COVID-19.

"We mix it together and whatever binds that disease particle is what we pull out of the library," said Barelle. "And of course, some of them were just terribly interesting because they actually stopped the virus from infecting and those are the ones that we pursued."

Anytime they found an antibody that stuck, they sent it to LeBeau’s lab for testing. There, sharks were injected with various coronavirus proteins. After their immune systems had a chance to kick in, LeBeau’s team harvested their antibodies to see how they were reacting.

"The breakthrough moment came when Elasmogen said they had a couple hits. And we tested those hits in our lab and they worked really, really well," said LeBeau.

They found several antibodies that bound effectively to different parts of the protein, which meant combining them could make for a highly effective treatment.

"It really is just multiple shots on goal, you really want to have as many opportunities as you can to block that virus," Barelle said.

And one antibody in particular was able to neutralize a broad spectrum of coronaviruses, including COVID-19, SARS and even a variant still found only in bats, said LeBeau, which is believed to be where COVID-19 originated. 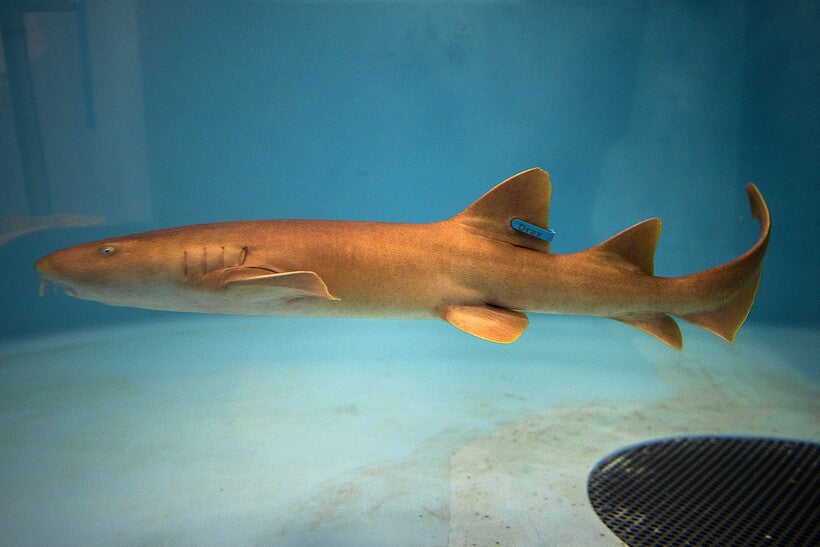 LeBeau said this particular antibody binds to a part of the protein spike that is common in all the coronaviruses and hasn't changed much through the COVID-19 variations. This bodes well for variants like omicron, where mutations to the spike protein caused it to evade the Pfizer vaccine.

Researchers still agree that vaccines are key to combating COVID-19. According to data from Wisconsin’s Department of Health Services, unvaccinated people die from COVID-19 at a rate 12 times higher than fully vaccinated people.

But while vaccines significantly reduce symptom severity, they are not a 100 percent guarantee against infection, as breakthrough cases indicate.

So effective COVID-19 treatment will remain a part of the world's response to the virus, and shark antibodies could someday be among those therapies.

LeBeau said the treatment still needs to undergo years of testing, including toxicity studies in rodents and non-human primates before it would be ready for human trials.

"But by doing this now, by engaging in this research project, we can develop effective therapeutics for coronavirus pandemics that are potentially on the horizon," LeBeau said.

This was true for the mRNA technology that made the COVID-19 vaccines possible.

"People said that this vaccine was rushed through quickly. But it really wasn't, because after the SARS outbreak 20 years ago, scientists started to think, 'Well, this spike protein is a great target for a vaccine.' So in reality, the COVID-19 virus vaccine has been in the works for almost two decades," said LeBeau.

While people have tested the waters of shark antibody treatment in the past, LeBeau’s lab is one of the only in the world to do this kind of research.

"Shark antibodies have not been explored in oncology or really in infectious disease research. So everything we're doing is brand new. And that's very exciting to us," he said.

And he has hopes of expanding the lab. Currently, his four nurse sharks are about a year old, so they’re small — only about 1 foot long. But over the next 20 years, they will grow to be as big as 7 feet long and 300 pounds.

That means more space and a lot more food will be needed.

LeBeau said the sharks eat about 5 percent of their body weight three times a week. In their native Atlantic Ocean and Caribbean waters, they gorge themselves on shellfish that they suck off the bottom of the ocean.

"These guys are like ginormous vacuum cleaners," LeBeau said. 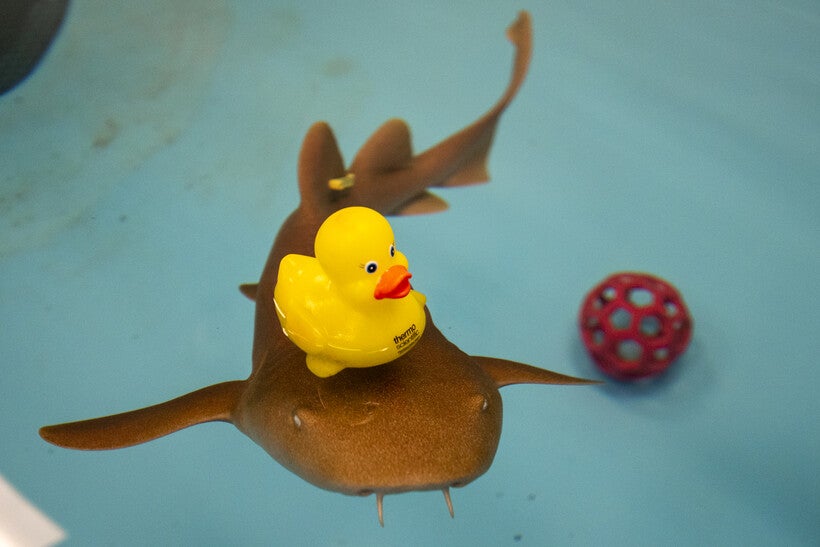 A nurse shark swims underneath a toy in his tank Friday, Dec. 17, 2021, at a research facility. Angela Major/WPR

But in the lab, they make do with frozen salmon and octopus from Whole Foods. The sharks' favorite, LeBeau said, is Key West Pink Shrimp. For Thanksgiving, LeBeau treated them to Lobster. He feeds the sharks by hand, and they eagerly splash and smack at the bits of fish.

It’s clear that LeBeau has a reverence for the sharks as much as for the research. His niece named the creatures after James Bond characters — Sir. Hugo Drax was his first shark, then came Mr. Stamper and Goldfinger, and the smallest is Nick Nack.

They get blood drawn every one to two months and spend the rest of the time playing in their 78 degree water. They’re nocturnal, so they generally spend their day sleeping in a cozy pile. But when they see LeBeau enter the room, they swim to the edge of the tank waiting for food. He dons latex gloves and playfully strokes their backs like cats.

"My favorite part is playing around my sharks," said LeBeau. "They're beautiful creatures. You know, a lot of people when they see a shark, they're scared by them. And I just think they're wonderful."