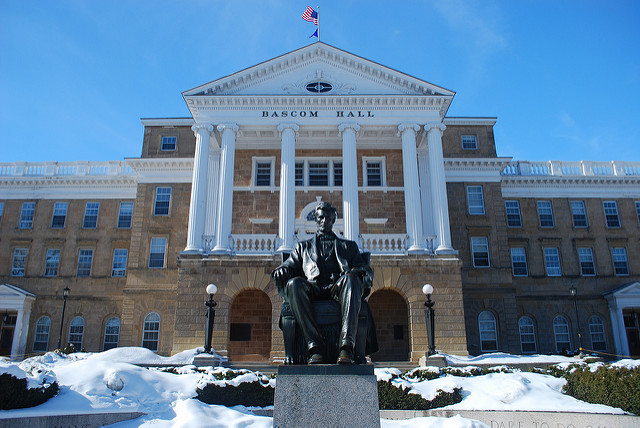 Researchers at the University of Wisconsin-Madison receiving grants from the National Institutes of Health (NIH) filed more financial conflict of interest disclosures than any other institution, according to data published by the nonprofit news organization ProPublica.

Conflict of interest disclosures are required by the NIH whenever a researcher receiving taxpayer funded grants gets outside compensation related to their field of study valued at more than $5,000 or more in a given year.

On Dec. 6, ProPublica published an article citing a NIH database of disclosures, which it reports has not been made public before. The article reports that such financial conflict of interest disclosures are required "because outside income from interested parties can potentially affect researchers' objectivity and influence the design and findings of their taxpayer-subsidized work."

ProPublica reports researchers at UW-Madison filed 1,015 conflict disclosures since 2012, "the most of any institution." In second place, according to ProPublica, was the University of North Carolina at Chapel Hill, which filed 358 disclosures.

Eric Campbell, a professor of medicine and director of research at the Center for Bioethics and Humanities at the University of Colorado, told WPR that UW-Madison has led the nation in entrepreneurial activity among faculty through the Wisconsin Alumni Research Foundation (WARF), which was created in 1925. The foundation’s website says it is the "designated patent and licensing organization for UW-Madison."

Campbell said the interplay between business and researchers is a necessary function of transferring findings into the commercial market.

"And the existence of a conflict alone, unless it is extremely egregious, is not the issue," said Campbell. "The issue is how well do universities manage these."

He said generally, public universities like UW-Madison have been better about managing researcher conflicts than private research universities.

Brian Fox, UW-Madison associate vice chancellor for research, policy and integrity, told WPR that financial conflicts of interest among researchers run the gamut but are managed by the university.

"That might be anything," said Fox. "That could be a cash payment, ownership of a privately held startup company, it could be service on a board of directors."

Fox said it’s possible that current university policies on NIH conflict of interest may result in duplicate disclosures from researchers who receive multiple federal research grants. He said other universities have developed ways to "evaluate each of the individual grants and understand the relationship in a way that we have not been doing at UW-Madison."

"So, we’ve always been very broad in the past but a consequence of that is we’re reporting more than other universities," said Fox. "And we’re evaluating how we can do better on this, be more targeted."

Fox said many UW-Madison researchers are also inventors that may hold multiple patents.

"And one thing that UW-Madison does is we let our investigators be owners of companies," Fox said. "We actually encourage them to go out, make startups, try to transfer their discoveries to the private sector. And so we let people be owners of companies. They need to report it and they do."

Fox said his office has been working with faculty to review conflict of interest reporting policies this year in hopes of streamlining the process while maintaining adherence to federal rules.

Conflicts of interest among researchers at UW-Madison are reviewed by a faculty governance group called the Conflict of Interest Committee. It is made up of a chair and 12 to 18 members that are tasked with reviewing conflicts and determining whether they need to be managed by the university.

Fox gave an example of a researcher who also operates a startup company. He said a management plan for that individual would likely include prohibitions on that person buying supplies from their own company or using university property without administrative approval.

Editor's note: Wisconsin Public Radio is a service of the University of Wisconsin-Madison.