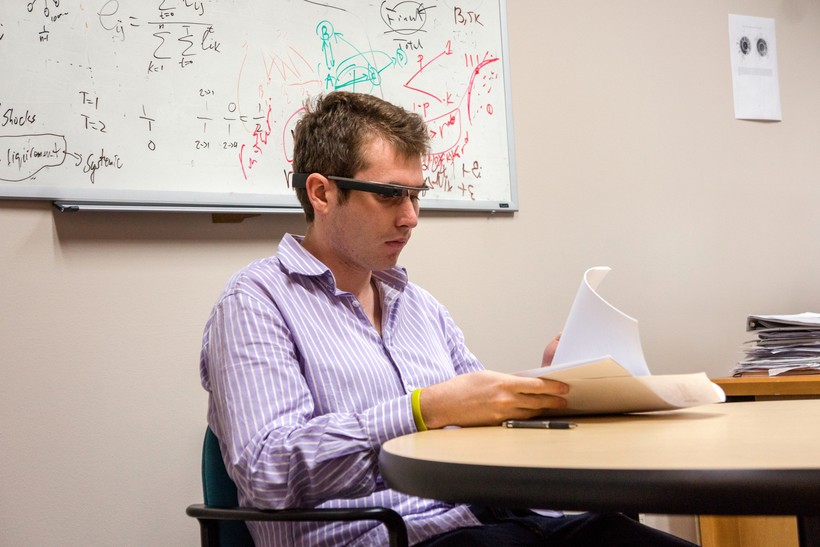 Google Glass has officially entered the classroom in at the University of Wisconsin-Madison: Professors are developing new ways to use the device after the school received a few pairs of the wearable technology more than a year before the public release.

Michael Gofman, finance professor at the UW-Madison's business school, and his teaching assistant started using Glass last year to record themselves grading assignments. He said the videos are like a lecture students can access from “anywhere in the world.”

“Some of the final exam videos that we gave them feedback, it was up to nine minutes,” said Gofman. “If you talk specifically to a student and point to his mistakes for nine minutes, it's almost like giving him a private lecture, in some sense.”

The UW School of Veterinary Medicine now has two pairs of Glass as well, and uses them for everything from recording surgeries to hoof trimming out in the field.

Dr. Jason Bleedorn works in the department of surgical sciences at the vet school.

“The first time wearing it through the (operating room), I definitely got a lot of looks and chuckles, and then it was like, that was my thing — I was the one coming down there wearing the glasses,” said Bleedorn. “Now everybody else wants to use it.”

Experts, however, say these early adopters shouldn’t get too carried away.

“What you don't want it to end up being is what a lot of experts call, you know, the ‘thousand-dollar pencil,’” said Eric Carbaugh, a faculty member with the Association for Supervision and Curriculum Development. “Maybe we give kids tablets or Google Glass, or whatever it might be. There's this tech tool that you integrate into the classroom, and what you end up seeing is that those tech tools are essentially used to take notes.”

The professors say they're looking forward to trying new things with the technology this year. In the meantime, check out a University of Wisconsin video showing Dr. Bleedorn using Google Glass at the veterinary school:

Correction: The original version of this story said that Eric Carbaugh was a board member of the Association for Supervision and Curriculum Development. He's actually a faculty member, not a board member.