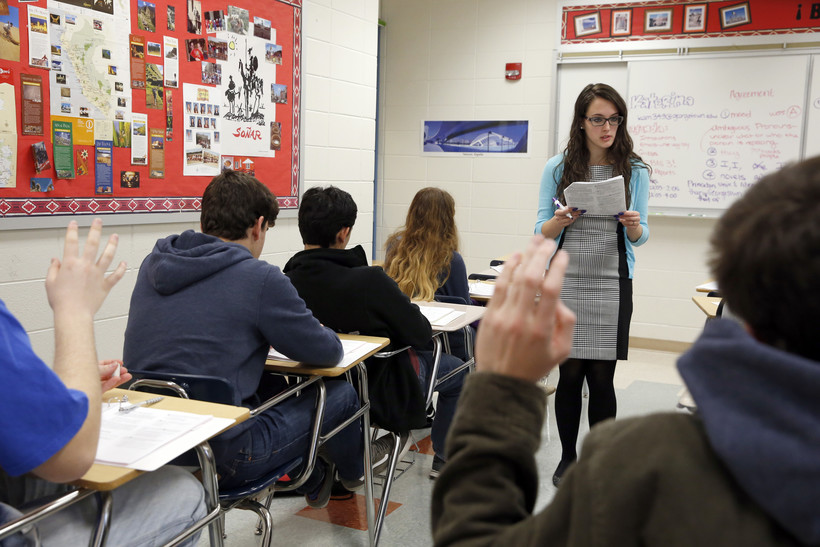 Dean: 'We're hoping that we develop an example of how to do this'
By Madeline Fox
Share:

For Maddy Rauls, teaching is a family business.

The fourth grade bilingual English language arts teacher in Waunakee has several aunts who are teachers, and her dad was her high school's chemistry teacher.

When she started school at the University of Wisconsin-Madison in September 2017, a career in teaching was on her radar, especially because she loved babysitting and working with kids at summer school. When she liked the education classes she took her first couple of years, that sealed the deal.

Rauls had been able to cover the cost of college through a combination of scholarships, summer wages and a job at a local day care her freshman and sophomore years. By junior year, the scholarships thinned out, and she started needing to take out loans. Then, she got a call. She was eligible to have her tuition and fees paid for, and the costs of her teacher testing and licensing covered — if she agreed to work in Wisconsin schools for three or four years after graduating.

"I was always planning to teach in Wisconsin," she said. "I'd grown up around Wisconsin teachers, and I knew that's what I wanted to do."

Rauls is one of the early participants in UW-Madison's Teacher Pledge program, which covers the tuition, fees and testing and licensing costs for teachers who spend three years teaching at a high-needs school or in a high-needs subject area in Wisconsin, or four years in a school or subject area that doesn't meet those criteria.

Initially, the program was intended to run for five years, but UW-Madison announced last week that they were extending it for an extra year, to run through the 2025-26 school year. The university raised $20 million between 2018 and 2020 to fund the costs of becoming a teacher for 1,000 students.

Around the country, states have been seeing enrollment in teacher education programs fall short of the projected number of teacher openings. Many teachers are at or nearing retirement age, as the large Baby Boomer generation gets older, and in Wisconsin, teachers' frustration over Act 10 and, more recently, the stresses of teaching during the pandemic have prompted some to leave the profession early.

School administrators in rural districts have reported particular difficulties filling open teaching positions, and teachers of color are more likely to fall out of the teacher pipeline at every step than their white counterparts. In response, some school districts have started "grow your own" programs to help cover costs for and develop teachers of color or rural teachers.

Money is a particular barrier to new teachers. In addition to college tuition and fees, including a typically unpaid student teaching period when students are still on the hook for their university tuition, teachers have to pay to take certification tests and get licenses. That's why programs like Teacher Pledge, as well as grow-your-own programs, focus on covering some or all of those costs.

"I really felt the impact when I did my student teaching semester," Rauls, the first-year teacher in Waunakee, said. "I was stressed wondering how I was going to pay for school, as well as pay for rent, with the money I had saved from the summer before, and the Teacher Pledge took a lot of that financial burden and stress off."

Hess said the School of Education has seen its enrollment grow in recent years, which she attributes in large part to the Teacher Pledge. Still, she said, UW-Madison's program can't solve the problem on its own.

"At the end of the day, we were able to raise this money because we have the donor base at UW-Madison," she said. "For a lot of institutions that have teacher ed programs, they're just not able to raise that kind of private money."

The School of Education is also running a research effort to study the program's effectiveness, both so the school can make corrections as needed to make the pledge more effective, and also, Hess said, so it has a "proof of concept" that might be able to convince legislators to invest in a statewide pledge program.

"We're hoping that we develop an example of how to do this, especially if the research shows that it's working well," she said.

Hess said it will also have to come with other improvements, like an increase in teachers' pay.

Before the Teacher Pledge program took effect in fall 2020 and Rauls got her senior year covered, she said the finances of going into education looked grim.

"I was thinking, I'm going to go into so much debt, and not necessarily be guaranteed to make a wage that will allow me to pay off that debt," she said.

Democratic lawmakers in Wisconsin have proposed a package of bills that would address some of those issues — teacher pay, an hourly wage for student teachers, a teacher pledge program and other changes — but it's not clear they'll even make it to the governor's desk.

For now, the Teacher Pledge program at UW-Madison took some of the financial pressure off of about 100 teachers like Rauls last year, getting them into classrooms with less debt or less of a financial strain on their families.

The first few years of teaching are challenging — nearly half of teachers leave within their first five years — but Rauls said it's also been rewarding. She loves reading books aloud to her classes — their favorite so far has been "Breadcrumbs," by Anne Ursu.

"I really just enjoy exposing kids to as many books as possible," she said. "I love leaving them on a cliffhanger, if I can."