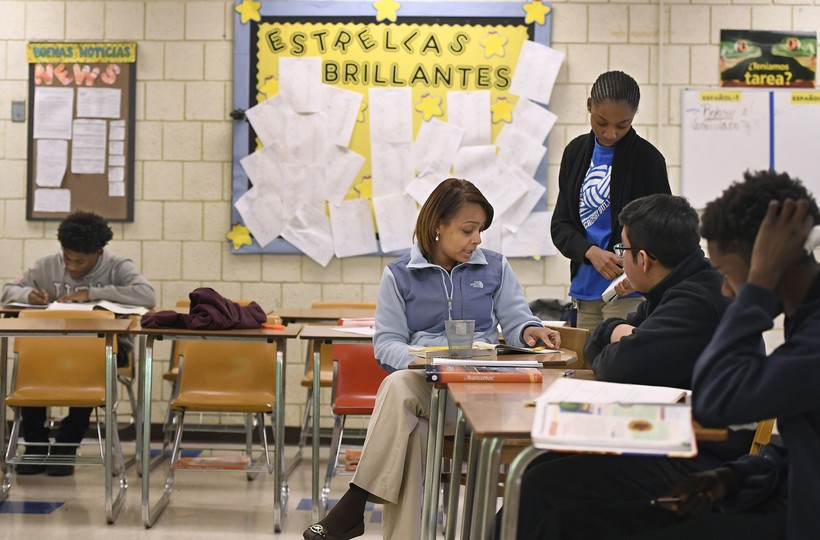 In this Nov. 7, 2019, photo, bilingual history teacher Ana Garcia works with students at Crosby High School in Waterbury, Conn. As mounting research highlights the benefits minority teachers can bestow on students, the gap has received renewed attention, including from Democratic presidential candidates who have endorsed strategies to promote teacher diversity. Jessica Hill/AP Photo

Report: There Are More Teaching Jobs In Southeast Wisconsin Than Grads To Fill Them

Southeastern Wisconsin colleges and universities aren’t on track to graduate enough education majors to fill the projected openings for teachers in the region, according to a new report from the Wisconsin Policy Forum.

The 18 institutions in the Higher Education Regional Alliance issued about 2,062 education degrees and certificates a year from 2011 to 2019. The Wisconsin Department of Workforce Development estimates 2,565 openings for preschool and K-12 teachers per year from 2018 to 2028 in the seven counties those colleges cover.

Sara Shaw, the lead researcher on the report, noted the gap between graduates and openings is likely even larger, since some people getting education degrees and certificates may be going into other fields, or they’re already teaching and just got a new certification.

"We are already facing a gap straight off the bat," she said. "Even if every single one of those education grads was going straight into teaching, which we know they are not, we would still be down."

Wisconsin, like the country as a whole, has been grappling with a teacher shortage well beyond just its southwest region.

"We get calls from school districts all the time looking for people to fill teaching positions, and we honestly don’t have enough graduates to fill those positions, and I think it’s not just teachers, it’s school counselors and school psychologists," said Deanna Schultz, associate dean at the University of Wisconsin-Stout’s school of education. "I think any dean at any UW campus would have a similar story."

The shortage is even more pronounced among teachers of color, who face barriers at every level of the teacher pipeline.

Some school districts have set up programs to "grow their own" teachers — especially teachers of color — by identifying people within their communities and offering scholarships, mentorship and other support to get their teaching degrees.

Daniel Jackson is an assistant principal at Marshall Middle School in Janesville. He received an early round of the Janesville Multicultural Teacher Scholarships, which uses donations and fundraising to provide a stipend to selected students earning a teaching certification in exchange for three years working for the School District of Janesville. He applied after getting his undergraduate degree in African American studies at the University of Minnesota Twin Cities and was able to use the scholarship for the additional schooling he needed for his teacher certification.

Since it started in 2008, the program has produced 10 teachers, seven of which, Jackson said, are still with the district. He’s now on the board for the scholarship and helps select recipients.

"When we do the interviews and we sit in front of them, they tell us their stories and it’s incredible just to see where they’re coming from and where they want to go," he said. "It’s like, man, I want my kid to have you as a teacher."

The scholarship was established in 2008 to address the disparity between the student population and the district’s teachers — 16 percent of students were nonwhite, while teachers of color made up only 2 percent of the staff. Since then, the disparity has widened to 30 percent students of color and still about 2 percent teachers of color. Still, Jackson sees it as part of a long game to help students and other community members of color see a role for themselves in the district.

"If we’re promoting diversity, promoting culturally responsive practices, I think that’s a hook not only for students to get into the profession, but efforts to diversify our staff currently," he said.

The Wisconsin Policy Forum report shows some improvement in attracting students of color. 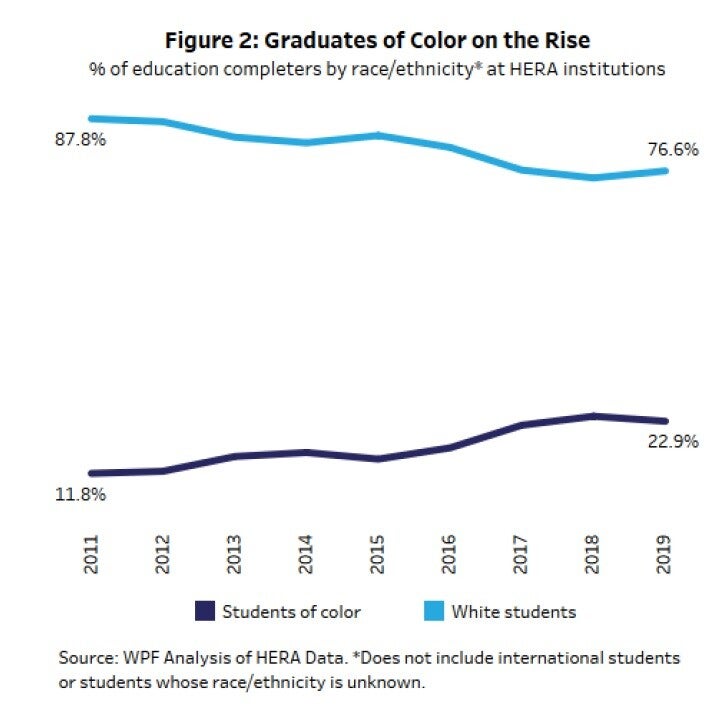 In addition to the shortage of potential new teachers, a year and a half of pandemic learning has made some experts worry about teacher burnout sparking early retirements or teachers switching careers.

Shaw noted it’s possible there will be other pressures on teacher demand because of the coronavirus pandemic.

"I suspect that we would actually see it more on the side of school districts wanting to bring more staff in to be able to do things like lower class sizes so they can have more social distancing, or offer additional supports for students that often involve more staff," she said. "If we were going to see a greater gap between supply and demand, I would actually expect it to be on the side of districts demanding more staff."

While the demand for new teachers may be increasingly outpacing the supply, Schultz said, it takes years to develop new teachers, whether they’re coming straight from high school or an entirely different career path.

"We recognize that there is a need," she said. "But to have qualified, well-prepared educators takes time, just like it takes time to prepare a doctor, or a lawyer, or an accountant."