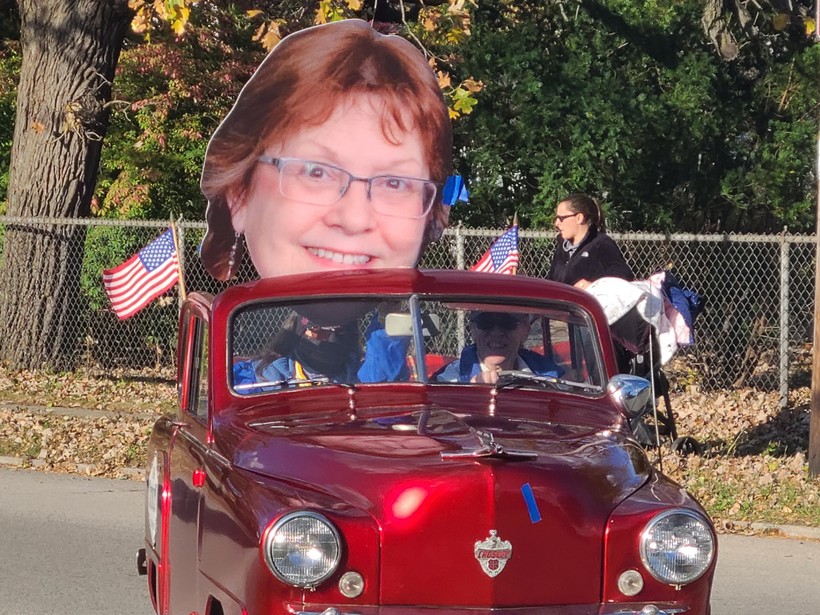 The Strains Of Pandemic Teaching Prompted Some To Move Up Their Retirement Plans
By Madeline Fox
Share:

When Rice Lake third grade teacher Teresa Webber talks about how she's feeling, the first word that comes to mind is "tired."

Rice Lake was teaching students in person all but one week of this school year, but kept a virtual option for students whose families weren't comfortable sending them to a classroom, or for those who were out quarantining due to possible exposure.

"It felt like teaching double a lot of the time. It was difficult, and I think a lot of people went, 'Well, I don't think I can do this anymore,'" Webber said.

As of February, Webber was one of nine educators in her district retiring at the end of the year. The Wisconsin Department of Employee Trust Funds, which tracks the retirement of state employees, doesn't yet have data for 2021 retirements, but it did see a 14 percent increase in 2020. Nationwide, surveys of teachers have shown that more are thinking about retiring or quitting after this disrupted school year.

"My family has been super supportive (of me retiring) and actually, most of them were going, ‘Don’t you think this should be the last year for you?’," Webber said. "They were maybe there before I was there — my kids had a bet if I was gonna go or if I wasn’t gonna go."

Wisconsin, like many other states, has been dealing with a teacher shortage for years — one that's particularly exacerbated for teachers of color, who are underrepresented at every level of the teacher training pipeline. A potential increase in teachers retiring or quitting because of the coronavirus will butt up against demographic trends, as well — more Baby Boomers, who are a large share of the working population, are hitting retirement age.

"It is a concern in Wisconsin that there aren’t enough teachers, and even though there are great people going into the profession, it’s changing, it’s endangered," said Meg Graham, a retiring high school Spanish teacher in Mukwonago. "I think it’s a profession that they need to make some changes — it’s whether it’s in time for people to change their mind."

Graham initially retired at the end of last year over her concerns about COVID-19. Teaching was her second career, so she's older than some of her peers at 62, and she was worried going back to the classroom would make her especially vulnerable.

"Because of my age, I just didn’t feel really safe, even though they were putting a lot of things in to mitigate the risk," she said. "My daughter’s a nurse, and she kind of insisted, as well, and helped me understand at my age that it wasn’t safe for me to be exposing myself to COVID-19 on a daily basis."

Graham said it was a heartbreaking decision, and she cried for several days — until her superintendent called to ask if she would come back to run the language program for virtual students, which would allow Graham to work from home. She accepted, and is now retiring at the end of her 34th year, which had always been her goal.

"My homeroom graduates this year, and they’ve been my homeroom for four years, and I wanted to finish the year with them," she said.

She didn't get to spend much of the year with those students, since she was fully virtual, but now that she and most of her colleagues are fully vaccinated, she said she'll go into the school building for a small farewell event.

Anthony Schnell, a high school chemistry teacher in Lodi, said retiring this year wasn't part of his plan before COVID-19. He's been teaching for 29 years, and said it deeply affects the way he moves through the world — at a recent doctor's appointment, for example, he asked questions of the doctor and technicians about why they did things a certain way and what things meant.

"I’ve done that for years and years, but in the back of my head was always, I can share this with my students, or how can I bring this into my classroom, or what can we do to show students that this exists outside the classroom," he said. "I’m going to have to rediscover being curious just for being curious, and it feels like a dead end right now."

Schnell and his wife own a bakery and coffee shop, Windsor Breads, that he said has been doing well. When he ran the numbers, it made more financial sense for him to quit teaching and work at the bakery full time.

"I know numbers, and the numbers tell you this is just the wrong field to stay in right now." he said. "I can do better running my own business, with less stress, than I can trying to teach. And the number of people that I’ve talked to that have said, 'Yeah, if I had a similar deal I’d be out of teaching, too,' is quite high."

Several other teachers in his district are leaving this year, too. In Mukwonago, Graham knows of three other teachers who are retiring after this year. As a mentor to younger teachers, though, she said she's hopeful that the stresses of pandemic teaching won't drive as many out as some have feared.

"Most of the young teachers I’ve talked to are still looking ahead, and they’re looking at this as a blip year, they aren’t saying 'I quit,'" she said.

Webber, likewise, is relatively optimistic about the teachers who remain.

"There’s a lot of institutional knowledge going out the door in my district, there’s a lot of folks who have been around for a really long time," she said. "But the folks that I see coming in, and the folks that I’m working with, really have that heart to work hard in the profession, and I think they’re gonna be just fine, they’re gonna be great for kids, and I think they’re going to have resilience, as do the students, to come through this."

Webber said she spent a lot of time reassuring younger teachers, and reminding them that a lot of parts of their job — from teaching to personal development — are more fun in years that aren't so restricted by a deadly virus. At the same time, though, she said she learned a lot from the younger teachers, as well, who helped troubleshoot virtual teaching issues.

"It was really nice to mentor those folks and let them know how things usually are, but it was also nice to have them help us when we couldn’t figure out how to attach something to a reminder or get a JamBoard going," she said.

Schnell is less optimistic. He was relieved to see the district got several strong candidates to fill his job, but said the number of applicants was much lower than he's seen in the past — a slide he attributes not just to the pandemic, but to years of disinvestment in teachers since Act 10.

Schnell made the decision to retire in December. For Webber, that was around when the worst exhaustion hit for teachers in her district — when COVID-19 was spiking around the state and teachers had to manage more virtual students because of quarantines.

"We were happy to provide that instruction to them because we didn't want them to get behind," she said. "We wanted to have the best instruction quality for our kids, but it was a grind, and I definitely feel tired, and stressed and ready to take a break."

She said she'll focus on the volunteer work she never had as much time for during the school year, like working with hospice patients and Meals on Wheels.

Schnell is excited for his bakery business, but acknowledged it'll be an adjustment from teaching.

"We make people happy because they get their coffee, especially early in the morning, and they get really good bakery and we put a smile on their face, but it’s so fleeting, it’s not the same thing as what you develop with students, and being able to direct their growth," he said. "Your impact on society is much smaller — I feel like I’m shrinking as a person, as I look into retirement, and I know I have to figure out a way not to feel that way."

Graham, in Mukwonago, said she's already made plans to keep teaching, in the form of one class, three days a week at Carroll University.

"I’m just not ready," she said. "I’m too old for six classes a day and all the other things that go with it, but I’m not ready to say goodbye to it, because I really love it."