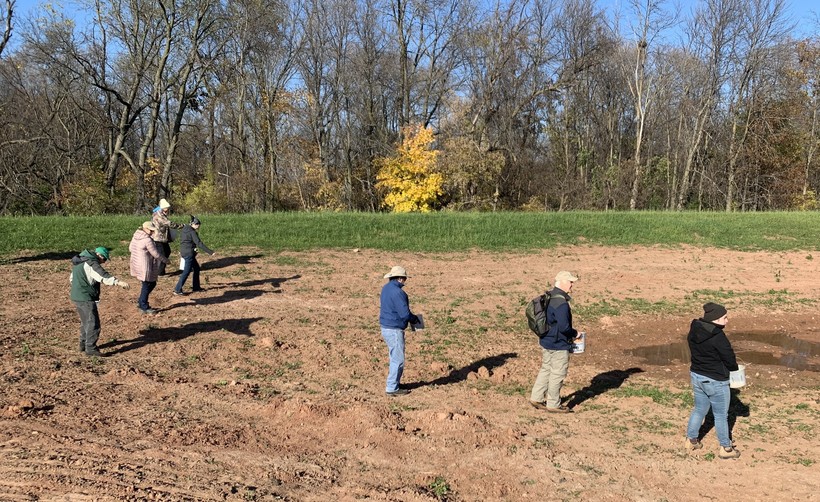 'Oak savanna is essentially the result of millennia of Indigenous knowledge'
By Megan Hart
Share:

The University of Wisconsin-Green Bay is leading a project to restore rare oak savanna in Northeast Wisconsin.

In the past, the area near UW-Green Bay’s campus wasn’t continuous moist forest, like most of the region, said Dr. Robert Howe, a biology professor and founder of the Cofrin Center for Biodiversity. The first federal surveyors found open space, scattered oaks and Indigenous people who had shaped the land, he said.

"So, our goal is to restore the 76 acres into a natural community that is oak savanna with a riparian forest running right through the middle of it," he said.

The university and its partners purchased about $30,000 worth of seeds. On a sunny afternoon in November, volunteers and students helped scatter them by hand in areas that couldn’t be reached by tractor. Once the grasses grow, the university will plant oak trees that will play host to red-headed woodpeckers and other species that are declining in the area, Howe said.

Oak savanna is typically an open grassland with scattered oak trees, explained Dr. Karen Stahlheber. There aren’t many left in Wisconsin or the upper Midwest, she said. Across the globe, they’re being lost to deforestation or being overtaken by other species.

She said it's a great opportunity for students to work on restoring a threatened habitat, and volunteers said they were excited to take part in a project that will have a lasting impact on the region. 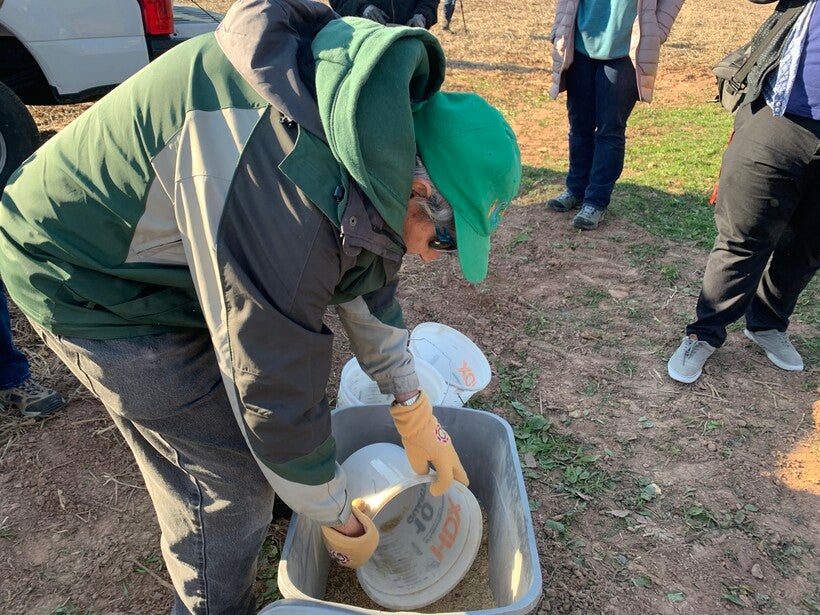 A volunteer scoops grass and sedge seeds to hand sow prairie near the University of Wisconsin-Green Bay. The area will become an oak savanna. Megan Hart/WPR

Olivia DeCastro is working toward a master’s degree in environmental science and policy at UW-Green Bay.

"Community engagement is really important," said the Green Bay native, who has a particular interest in prairie restoration. She’s worked on similar projects near Madison. But she said this project is special because oak savanna is rare, and it’s taking place on Native land.

"Especially in this part of Wisconsin, oak savanna is essentially the result of millennia of Indigenous knowledge," she said. "These oak savannas wouldn’t be here without the First Nation’s people and the way that they managed land."

The project will benefit pollinators, birds and bats.

"There’s a lot of biota that really depend on oak savannas, so that’s the main goal of why we’re doing this," she said.

Students are working alongside a contractor to remove invasive species from the surrounding forest. In the spring, they’ll plant more than 5,000 trees and shrubs in the area, Howe said.

The Wequiock Creek Natural Area, where the project is taking place, was recently created in the town of Scott on land owned by the Northeast Wisconsin Land Trust. It joins up with the university’s Point au Sable Natural Area to create a green corridor of more than 250 acres.