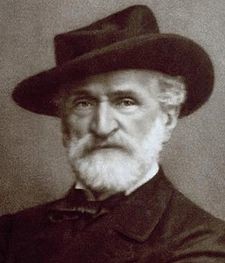 While he was in Paris for performances of his opera Il Trovatore, Giuseppe Verdi took time to attend to some urgent business. On October 21, 1855, he wrote a fervent letter about the need to get international copyright protection for his works, which were being pirated in England because there was no treaty between the country of his citizenship–the Duchy of Parma–and England.

He had been advised to change his citizenship to English, French, or Piedmontese in order to gain copyright protection, but instead he appealed to the government of Parma to enter into a copyright treaty with the English.

I want to lodge a bitter complaint about the printed edition of my most recent operas, which were very carelessly prepared and loaded with mistakes, and most of all because the first edition of Traviata was not withdrawn. That is unforgivable negligence!

If I had not, by pure chance, gone into the shop of the Escudiers, that edition would have circulated all over France. Who knows whether it isn’t now going through Germany, Spain, and other countries in the same form!

You know full well that this edition should’ve been off the market two years ago! (It was on that condition only (a condition in my contract, I asked no money for it!) that I made the arrangement for Coletti.

But who has ever cared about the reputation of an artist? I can’t help coming to a conclusion that I find very discouraging: In the course of my already long career, I have invariably found all impresarios, publishers, etc., hard-nosed, inflexible, and implacable, with law books at hand if they found it necessary. Fine words and very bad deeds. I’ve never been considered anything more than an object, a tool, to be used as long as it earns something. That’s very sad, but it’s true.