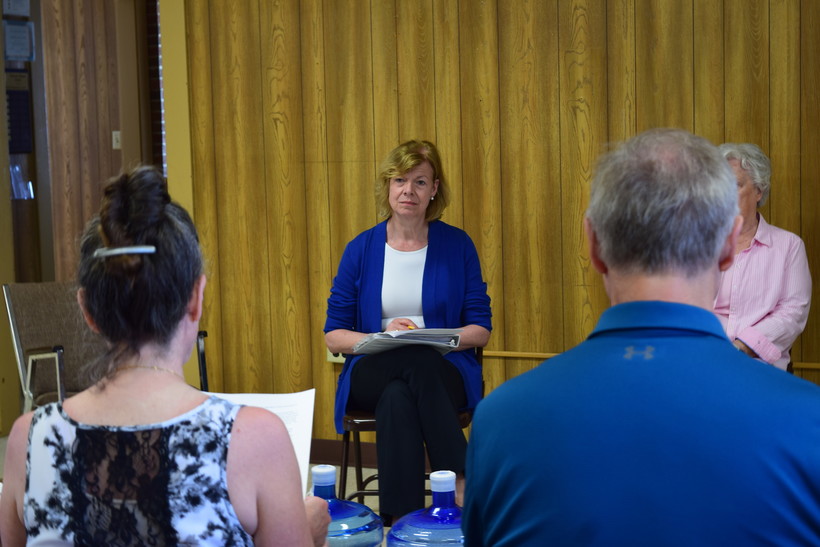 U.S. Sen. Tammy Baldwin, D-Wis., listens to residents from the Town of Campbell who have PFAS contamination in their private wells during a listening session on Friday, May 13, 2022. Hope Kirwan/WPR

US Sen. Tammy Baldwin says she hopes to equip Wisconsin communities to deal with PFAS contamination

Baldwin visited with municipal leaders and residents during a visit to French Island on Friday.  Located on the Mississippi River, French Island contains the Town of Campbell and parts of the city of La Crosse, including the La Crosse Regional Airport. The city started investigating PFAS contamination in municipal wells near the airport in 2019. Last year, testing showed that more than 500 private wells owned by Campbell residents also have some levels of PFAS contamination.

More than 1,100 residents on the island have been relying on bottled water provided by the state for more than a year. Officials have said the chemicals likely came from the use of firefighting foam at and around the airport. La Crosse leaders say they’re doing their own investigation to identify the sources of the contamination.

In March, La Crosse Mayor Mitch Reynolds announced Baldwin had helped the city secure $3,730,000 in federal funding to treat municipal wells on the island that are contaminated by PFAS. The money was an earmark in the federal omnibus spending package.

During the Baldwin’s visit Friday, city officials said they're hoping to have a design for how they would remove PFAS in place by the end of next year, with construction on the facilities planned for 2024. Reynolds said the funding will help the city increase their water capacity by bringing the contaminated wells back into use. 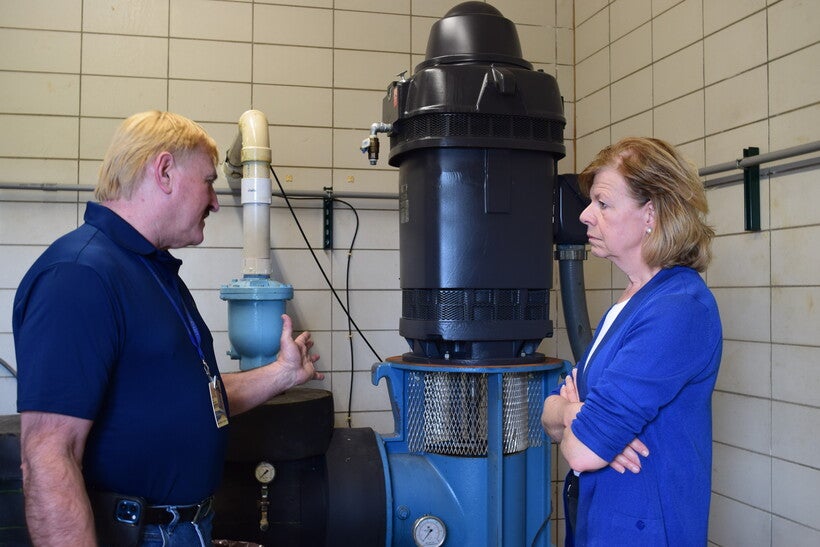 U.S. Sen. Tammy Baldwin, D-Wisconsin, tours one of La Crosse's municipal wells on Friday, May 13, 2022. Baldwin helped secure $3.7 million in federal funding for the city to remove PFAS contamination from three of their wells. Hope Kirwan/WPR

"Assuming that we have some success here, not only will this help our community, but provide a model for other communities that are facing similar challenges all throughout the United States," he said.

Reynolds said increasing the city's water supply will also allow them to provide water to other customers in the future. La Crosse and the Town of Campbell started discussions in February about bringing municipal drinking water to French Island residents who have private wells contaminated with PFAS. Reynolds wouldn't say how those talks are progressing during the event on Friday, just that the discussion is ongoing.

Baldwin said at the event that she was glad to bring La Crosse's funding request forward, calling it “a community-initiated project” instead of an earmark.

"This was one that was very dear to my heart. And I'm trying to equip local communities with the support from the federal government that they need to address these challenges," she said.

Baldwin also used the visit to talk about new legislation she introduced at the end of April that would provide grants for water testing and treatment technology directly to individuals, non-profits and local governments in rural communities. The treatment systems could help people with PFAS contamination, like those in Campbell, as well as people dealing with contamination from lead, nitrates and manure.

“Private wells, I think, require a different type of approach in terms of being able to test and to be able to clean up their drinking water,” Baldwin said.

She said she hopes the legislation will be included in next year’s federal farm bill, which typically covers issues for rural communities.

Baldwin also held a listening session with leaders and residents from the Town of Campbell on Friday. 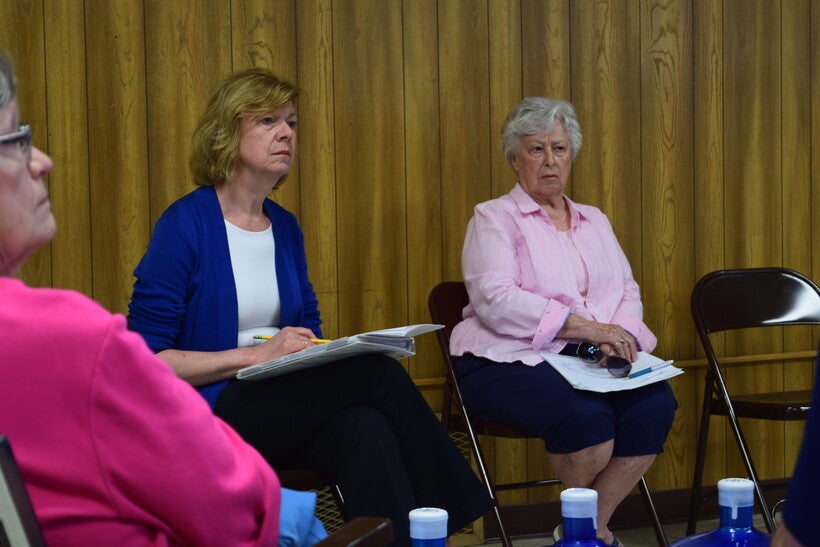 U.S. Sen. Tammy Baldwin, D-Wis., listens to residents from the Town of Campbell who have PFAS contamination in their private wells during a listening session on Friday, May 13, 2022. Hope Kirwan/WPR

Lee Donahue from the town’s board of supervisors said she was pleased with the opportunity to talk to Baldwin about what the community needs when it comes to federal support for addressing water contamination in the community.

“What a lot of the residents said is that, you know, we've done a lot of testing, a lot of the testing has been paid out of the pockets of our residents,” Donahue said. “We know that the island has contaminated water, we know that our water aquifer, the shallow aquifer is contaminated. One of the big questions becomes, is there a type of emerging technology that could perhaps address the contamination and remove it from our groundwater?”

She said the community is interested in seeing more research opportunities that could benefit their community and allow residents to keep their private wells. While the community hopes to tap into funding made available through last year’s infrastructure package, Donahue said Campbell will have to compete with the growing number of communities in Wisconsin and across the country who are dealing with PFAS contamination.

But some Campbell leaders say they’re frustrated that La Crosse has been given money to clean up their wells when they’re considered the responsible party for the contamination by the DNR.

Robert Abraham is a La Crosse County Supervisor who lives in Campbell and has a private well contaminated by PFAS. He called the earmarked money for La Crosse “a slap in the face” to the town.

“None of that money came to the Town of Campbell to help our residents, our citizens. And they're still stuck with the same exact issue in that we can’t drink our water,” he said.

Abraham said the cost of putting in a municipal water system would likely be around $40 million, an out of reach expense for a town with an annual operating budget of $2.5 million. So he said the community needs help from the federal government or the state.

“I don't think the town should have to afford that because it was from nothing that we have done here. So we do need financial help to make sure that people have drinking water, that they can reach over and turn on that faucet and trust that water,” he said.

The city of La Crosse has said the manufacturers of PFAS-containing products are ultimately responsible for the contamination. The city filed a lawsuit against 23 chemical companies in March 2021, claiming the manufacturers knew the risks associated with PFAS in firefighting foam.