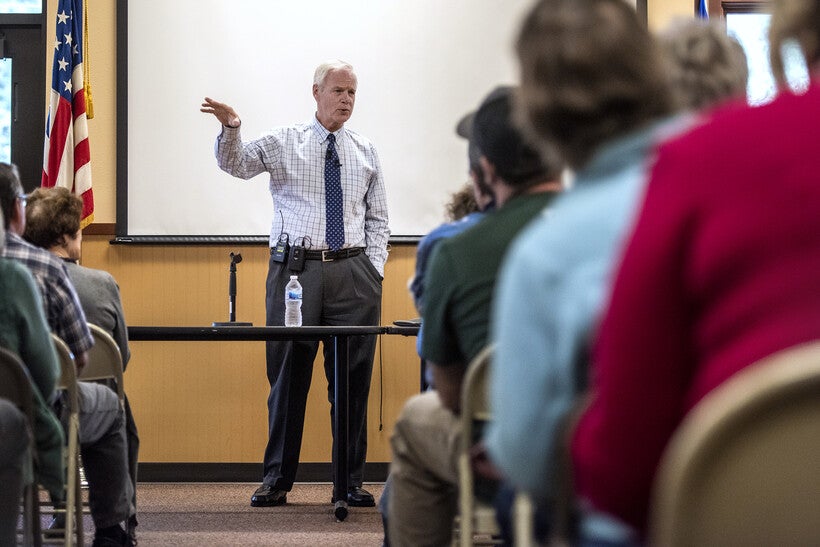 US Sen. Ron Johnson blasted for stance on Oshkosh Defense's move to manufacture outside Wisconsin

Democrats blasted U.S. Sen. Ron Johnson's statements saying he wouldn't get involved in a Wisconsin company's decision to bring 1,000 jobs to South Carolina instead of Oshkosh.

At issue is a contract worth billions to replace the fleet of some 165,000 vehicles used by the U.S. Postal Service. Last year, the federal government awarded an initial contract worth $482 million to Oshkosh Defense. In June, the company announced it would build the new vehicles in South Carolina. The long-term contract is worth some $11.3 billion.

Johnson, R-Oshkosh, told reporters Saturday he would not want to "insert myself to demand that anything be manufactured here using federal funds in Wisconsin," saying it's more important for federal dollars to be spent efficiently. He also downplayed the importance of adding jobs to Wisconsin's economy.

"It's not like we don't have enough jobs here in Wisconsin," Johnson said. "The biggest problem we have in Wisconsin right now is employers not being able to find enough workers."

Lt. Gov. Mandela Barnes, a Democrat who is seeking to challenge Johnson in November, said in a press conference Monday that Johnson "doesn't care about the working people he's supposed to represent."

"This is personal for me," Barnes said. "My dad is an active member of the (United Auto Workers). He spent 30 years on the assembly line, assembling catalytic converters, and he'd be the first to tell you that if you want something built right, you build it right here in Wisconsin with our incredible union workforce."

Oshkosh Defense workers in South Carolina are nonunion. The USPS contract has also come under fire in recent days, as the Biden administration has threatened to halt the contract because only about 10 percent of vehicles are planned to be electric. The federal contract is also the subject of a lawsuit filed by a rival company, alleging it was improperly awarded.

Barnes on Monday sent letters to President Joe Biden and members of Congress urging them to do "everything in (their) power" to reverse the company's decision to build the vehicles in South Carolina, and to Oshkosh Corp. CEO John C. Pfeifer calling on the company to reconsider its decision. Oshkosh Corp. is Oshkosh Defense's parent company.

Other Democratic candidates for U.S. Senate joined the chorus of criticism over Johnson’s remarks.

State Treasurer Sarah Godlewski wrote Johnson "doesn’t give a sh*t about Wisconsin workers. But I do."

Milwaukee Bucks executive Alex Lasry wrote "Johnson is out of touch with the needs of Wisconsinites."

And Outagamie County Executive Tom Nelson's response included a limerick: "There once was a big corporation/ Who took money from both the state and the nation/ Then shipped jobs out of Wisconsin./ When asked Senator Johnson/ Said it's fine — 'who cares about job creation?'" Prior to Johnson's statements, Nelson called on the state to suspend all tax credits for Oshkosh Corp. if the company chose to move production of the postal trucks to "union-busting South Carolina."

In a new statement Monday, Johnson accused the "liberal media" of distorting his comments. He said he is "always supportive of manufacturing in Wisconsin," and restated his view that addressing a worker shortage in Wisconsin is a more pressing concern than creating new jobs.

"For months, as I have traveled around the state every business owner I speak with tells me they cannot find enough workers, even causing businesses to adjust hours or shutter their businesses all together," Johnson wrote in a statement to Wisconsin Public Radio.

Many Wisconsin businesses do report difficulty in hiring. But the manufacturing jobs at Oshkosh Corp. are relatively stable and high-paying jobs that are often sought after by workers in a way that isn't always the case for lower-paying service industry jobs.

"It isn't just about jobs," said Rep. Gordon Hintz, D-Oshkosh. "It's about good-paying jobs. ... What's really built the middle class, what's really given stability, and what's really made Oshkosh more recession-proof than a lot of other communities is that we've had these contracts, and we've had the workforce to do it."

"It’s my job to support job creation in Wisconsin and I want the trucks built here,” Baldwin wrote. "To me, it's simple — I want Oshkosh Defense to manufacture trucks in Oshkosh with Wisconsin workers."

The comments were the latest by Johnson to stir controversy.

Last year, the senator, who is seeking re-election to a third term in November, has been a strident critic of the COVID-19 vaccine and has repeatedly made false or misleading statements about its efficacy that have been widely criticized by health leaders and even resulted in a suspension of his YouTube channel.

Amid false claims of a stolen election by former President Donald Trump, Johnson led an apparently failed push to eliminate the Wisconsin Elections Commission in favor of partisan control of election administration.

And less than two weeks ago, Johnson was widely criticized after he told a reporter in La Crosse that in his view taking care of children isn't "society's responsibility."

In the fall, a Marquette University Law School poll found 36 percent of Wisconsinites had a favorable opinion of Johnson, while 42 percent had an unfavorable opinion of him. The remaining 22 percent responded that they hadn’t heard enough or didn't know how they felt about him.