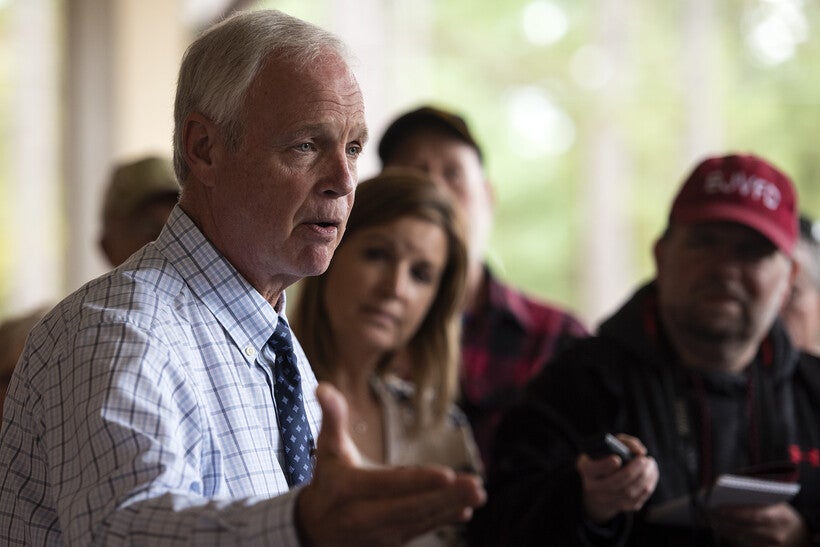 Republican senator was widely criticized for comments made in opposition to child care aid
By Rob Mentzer
Share:

U.S. Sen. Ron Johnson said he is "happy to defend" his statement that it isn't "society's responsibility to take care of other people's children."

On Tuesday, the Oshkosh Republican told La Crosse TV station WKBT that he opposes government support to help families pay for child care, a key legislative priority for Democrats. His statement suggesting that there is no collective responsibility to children generated instant controversy.

Johnson responded to that controversy on Thursday at a press conference in Madison, saying "obviously" it is the government’s role to "help people who can't help themselves or help people help themselves." But he went on to restate his opposition to child care aid.

For much of 2021, President Joe Biden and Democrats in Congress worked on a large social spending bill that included many different provisions, including policies they said would expand access to affordable child care. Democratic negotiations on the bill appeared to break down in December, in part over spending concerns by conservative Democratic senators. No Republicans in the Senate supported the bill.

In Wisconsin, a shortage of reliable and high-quality day care predated COVID-19, and the demands that came with the pandemic has tended to make care less reliable and more expensive. According to a 2020 analysis by the liberal Economic Policy Institute, the average cost for infant care in Wisconsin is more than $12,500 per year; care for a 4-year-old costs an average of more than $10,000 per year.

Johnson’s statements to WKBT were seized on by Democrats who said they illustrated his lack of concern for the financial pressures many families experience around child care costs. In full, he told WKBT: "People decide to have families and become parents; that (cost) is something they need to consider when they make that choice. I've never really felt it was society's responsibility to take care of other people's children."

"As a Wisconsin Senator, I don't believe it's society's responsibility to give huge tax breaks to millionaires, billionaires, and wealthy corporations," Baldwin wrote. "They should pay their fair share of taxes so we can lower the cost of child care for working families."

On Thursday, Johnson characterized child care aid as "the federal government wanting to take greater control over your children."

"Does the federal government want to start indoctrinating our children even earlier?" he asked.

Responding to the retirement announcement by liberal U.S. Supreme Court Justice Stephen Breyer, Johnson said he "has always respected" Breyer, despite differences of opinion on some of the justice's legal positions.

"My concern," Johnson said, "is that President Biden has been nominating to his federal agencies some of the most radical leftists that I've certainly seen in my time in the Senate, and I'm afraid that's what he's going to do on the Supreme Court."

Johnson did not elaborate on what acceptable nominees Biden could offer.

Johnson was first elected in 2010; he is running for reelection to a third term in November.