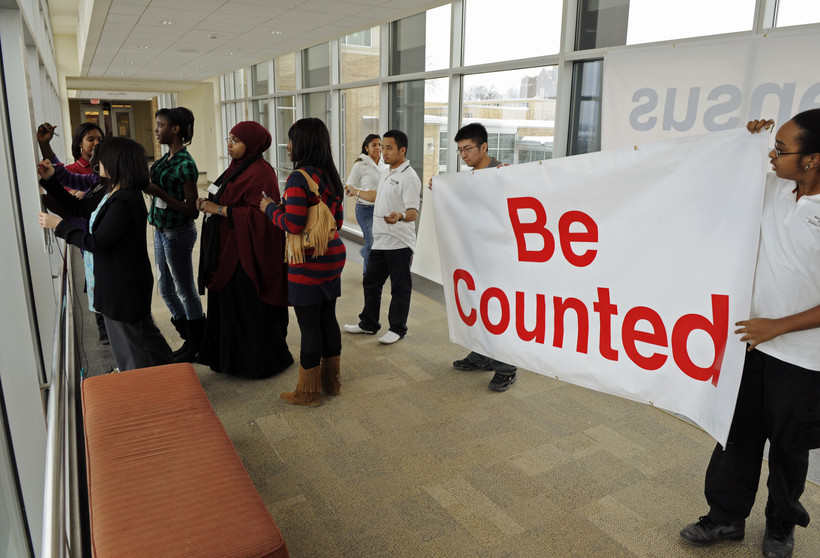 Students at Metropolitan State University in St. Paul, Minn., prepare to hang a banner on Jan. 15, 2010 as other students sign a pledge that they will fill out their census forms this spring inside the skyway where passing motorists will see the reminder to be counted. (AP Photo/Jim Mone)

At least one child advocacy organization is concerned that a projected undercount of children in Wisconsin during the 2020 census could threaten the amount of aid the state receives.

According to the 2018 Kids Count Data Book compiled by the philanthropic Annie E. Casey Foundation, the 2010 census missed almost 1 million children younger than age 5 in its count and is likely to do the same in 2020.

Ken Taylor, executive director of Kids Forward, formerly known as the Wisconsin Council on Children and Families, which is an affiliate of the Annie E. Casey Foundation, is concerned the undercount will directly affect funding to organizations relying on census numbers to track children in the state.

The U.S. Census Bureau said its own data helps determine where to send $675 billion worth of federal dollars each year, and Taylor said about $9 billion of that is dispersed to Wisconsin. This funding is primarily focused on health, foster care and child care, he said.

A study out of George Washington University, the County for Dollars Project, found the state loses about $1,500 for each person not counted. That means for every 750 people missed, the state loses out on more than $1 million each year for the next 10 years.

Taylor said that's a problem because the amount of federal funding that continues for 10 years depends on population figures from the census. The dollars fund programs such as Head Start, school lunches, housing, child care and others.

"That has significant negative repercussions for us as a state and for our state budget," Taylor said.

Researchers postulate kids are missed because they are part of families who aren't counted, they live in areas that are harder to count (rentals and multi-unit buildings), or the ones filling out the surveys don't include children. For example, in "linguistically isolated neighborhoods," some families were confused about whether to include children when counting their household, acting director of the bureau, Ron Jarmin, wrote in a blog post.

According to the U.S. Census Bureau, there are some groups that are historically undercounted. These groups include renters, non-English speakers, children, those with a low income and those who change residencies more frequently.

The 2020 census proves difficult for those living in rural areas, too, because many might not have as easy access to the internet, according to the bureau. This is the first year that much of the census will be completed online, and the Census Bureau expects that this new platform will affect the count, said the bureau.

The bureau said households that don’t respond to the census questionnaires will be interviewed by a census enumerator.

"For the 2020 census, we are looking to hire 1,000 partnership specialists at the local level," the bureau said in a statement. "These partnership staff are hired locally to engage with the communities we are working to reach, especially the hard-to-count population."

In the same data book that warns about repercussions of an undercount, the Annie E. Casey Foundation also released the rankings of states according to their children's well-being.

Wisconsin is 12th in the nation, keeping pace with last year’s rankings, which is typical for the state that traditionally places in the upper one-third of the states, Taylor said.

In the report, Wisconsin performed better than last year in terms of how many babies are born at a low birth weight, how many don’t have health insurance, the rate of child and teen death, and teens who abuse alcohol or drugs.

The program looks at 16 data sets in the categories of economic well-being, education, health, and family and community. According to the data book, 19 percent of American children live in poverty, and 28 percent of them have parents who lack secure employment. But these numbers have decreased since the last report in 2010.

Taylor said one of the challenges with the report is that it doesn’t account for race when determining the well-being of children, which he said could particularly impact the data set related to children living in poverty.

"The poverty rate in Wisconsin is quite different when you look at race and ethnicity," he said. "We know that we have a relatively low poverty rate, but it’s much lower for white kids than it is for kids of color."