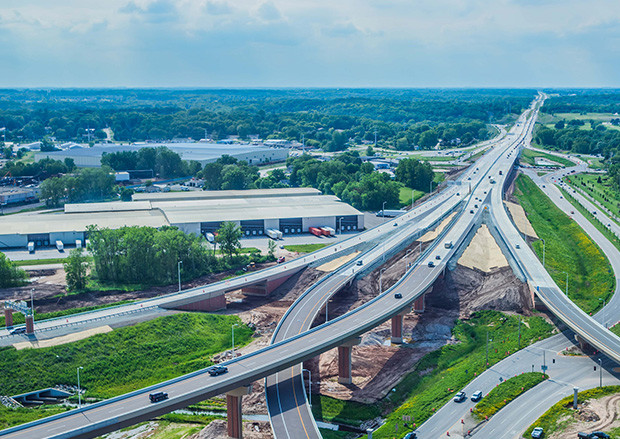 The Highway 29 and 41 interchange in Green Bay.

The Uncertain State Of Road Funding In Wisconsin

For well over a year, Wisconsin has been in a holding pattern about how the state should pay for building and repairing roads. The state's gas tax, a major source of funding for road work, is 30.9 cents per gallon. But that rate has not changed since 2006, while cars have grown more fuel-efficient, resulting in lower total revenue to devote to infrastructure needs.

In late 2014, Wisconsin Transportation Secretary Mark Gottlieb recommended a revenue boost in the forms of increased taxes and fees to pay for construction work. Instead, the state Legislature decided to borrow $850 million for roads in its 2015-17 budget. As planning for Wisconsin's next biennial budget proceeds, Assembly Majority Leader Robin Vos, R-Rochester, is calling on Gov. Scott Walker to reconsider his opposition to raising the gas tax without corresponding budget cuts. During his 2014 re-election campaign, Walker did propose restructuring the gas tax, but not by boosting its per-gallon rate. Supporters of a gas tax increase have yet to advance a specific proposal, though other legislators are waiting to see what an audit of the state Department of Transportation will reveal about spending on road projects in the works and identify potential savings.

A 2014 report from the Local Government Institute of Wisconsin examines several factors limiting transportation funding in Wisconsin: Lower gas-tax receipts, falling local tax revenues that counties and municipalities use to maintain roads, decreasing state aid to local governments and growing uncertainties in federal transportation funding. Wisconsin's roads depend on a complex array of funding sources, and they're all flagging in one way or another.

The long-term costs of infrastructure are likewise complex. Aging roads can damage vehicles and cause additional repair costs for their owners. Repair delays can make road construction more expensive due to greater deterioration and unexpected expenses. High-profile failures like the 2013 buckling of the Leo Frigo Bridge in Green Bay drive home the importance of investing in infrastructure.

The American Society of Civil Engineers sounded an alarm about the decay in infrastructure across the United States with its Report Card for America's Infrastructure in 2013, including in Wisconsin. The same year, an Associated Press review of the National Bridge Inventory noted dozens of bridges in the state placed in categories indicating potentially dangerous conditions. Meanwhile, the state DOT has sought to deflect such appraisals critical of Wisconsin's infrastructure, even issuing a press release in March 2016 that rejects the American Society of Civil Engineers' report and offers an alternative analysis.

But what stands out about road-funding policy is that, in both political and practical terms, it's a statewide issue that transcends any particular political base, and resists being defined by competing ideologies and urban/suburban/rural disconnects at play in Wisconsin politics. Leaders and commentators from all corners of the state are calling for more funds to fix aging roads and complete new projects.

Some Democratic legislators have chimed in against borrowing: In an June 2015 presentation on the current state budget, state Sen. Kathleen Vinehout, D-Alma, said the borrowing would drive up debt payments until they comprise 25 percent of Wisconsin's transportation budget. And in November 2015, Wisconsin environmental groups, which tend to ally with Democrats, praised Republicans in the state Senate for their opposition to borrowing more money to fund highway construction.And in May and June 2016, the Janesville Gazette and Green Bay Press Gazette called on legislators to find a solution, as did three statewide associations of local officials.

These circumstances may help to explain why some of Wisconsin's GOP legislators are open to boosting gas taxes and vehicle-registration fees.

"My colleague (Assembly Majority Leader) Jim Steineke, was right: Rigid ideology works often, but sometimes you have to look at the facts … drive in your local neighborhood, your local city, on a county highway, or anywhere in the state, and you'll see that the needs for transportation are real, and they are unmet," Vos said in a June 17 interview on Wisconsin Public Television's "Here And Now."

Vos stressed that raising transportation-related fees or taxes in the near term would be better than putting off any decision for a future date, when steeper increases might be necessary. He also reiterated his support for installing toll roads in Wisconsin. Rep. John Nygren, R-Marinette, also said he'd consider supporting toll roads in a November 2015 interview on WPR's "Central Time."

Vos also joins other legislative Republicans in waiting on the audit of WisDOT, due out in the fall. "I assume there will be ideas to help save money, and we'll implement those," he said. "I also assume that it won't cover anywhere near the $600 million annual deficit that we see in the transportation department with the needs that are there."

The debate over road funding transcends ideology, and declines in real spending on infrastructure across the nation reflect how politicians of all stripes can be reluctant to increase the taxpayers' tab for a mundane-seeming issue. But growing funding shortfalls at all levels of government, and outcry from all corners of the state, are changing that equation.