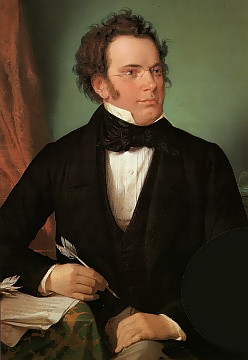 In July 1825 Franz Schubert was traveling through Upper Austria, enjoying mountain scenery and the company of friends. From the picturesque city of Steyr he wrote to his parents:

In Steyreck we stayed with Countess Wiessenwolf, who is a great admirer of my humble self, owns everything I have written, and sings many of the things very beautifully too.

The Walter Scott songs impressed her so favorably that she made it patently clear that she would not object at all if I were to dedicate them to her. But as far as they are concerned, I intend to break with the customary publishing procedure, which brings in so little profit. I feel that these songs, since they bear the celebrated name of Scott, are likely to pique more interest, and—if I add the English text—should make my name better known in England too. If any honest dealing were possible with these infernal publishers. But the wise an beneficent regulations of our Government have seen to it that the artist shall remain the eternal slave of these wretched money-grubbers….

I have come across my compositions all over Upper Austria, but especially in the monasteries at St. Florian and at Kremsmünster, where, with the assistance of an excellent pianist, I gave a very successful recital of my Variations and Marches fro four hands. The Variations from my new Sonata for two hands met with special enthusiasm. I played them alone and not without success, for several people assured me that under my fingers the keys were transformed into singing voices, which, if true, pleases me a good deal because I can’t stand the blasted hacking of the instrument to which even first-rate pianists are addicted. It pleases neither the ear nor the heart.