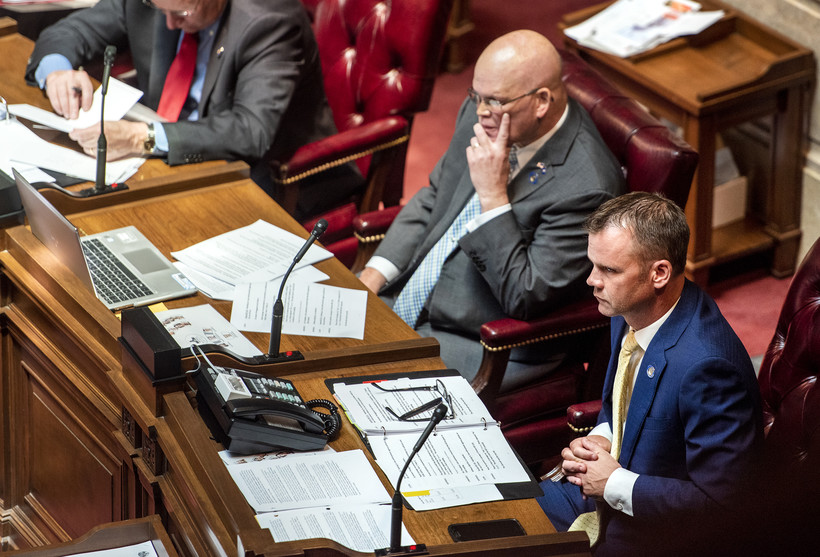 The GOP leader of the state Senate said he does not support a major overhaul of the Wisconsin Elections Commission despite a push from some rank-and-file Republicans to dismantle the agency.

Senate Majority Leader Devin LeMahieu, R-Oostburg, also voiced support for Sen. Kathy Bernier, R-Chippewa Falls, the outspoken chair of the Senate’s elections committee who has called for a swift end to an Assembly Republican investigation into the 2020 presidential election.

Republicans created the Wisconsin Elections Commission in 2015 after they dismantled the Government Accountability Board, or GAB, that preceded it. The GAB came under fire from Republicans for its investigation into former GOP Gov. Scott Walker’s campaign.

Unlike the GAB, which was run by retired judges, the Elections Commission is run by a panel of three Republican and three Democratic appointees, a structure that has frequently led to 3-3 votes on high-profile disputes and issues.

LeMahieu, who chaired the Senate’s election committee when the Legislature created the Elections Commission, said that while the 3-3 split can lead to gridlock, it also ensures that any guidance from the agency receives bipartisan support.

"I think the Election Commission still might be a format that actually works," LeMahieu said. "I would need to see a more superior way to do it before abandoning that."

Should Republicans win back the governor’s office this year, it could let them make dramatic changes to Wisconsin’s elections agency next session, including potentially giving themselves more control over who runs the agency. Asked about that prospect, LeMahieu suggested there was a downside.

"You could do that, but we might not be in the majority forever," LeMahieu said.

Other Republicans have suggested the Legislature should shift control of elections to Wisconsin’s Secretary of State, an elected office. LeMahieu said he didn’t support the idea.

While LeMahieu has joined other Republicans in questioning how the 2020 presidential election was run in Wisconsin, some of the sharpest criticism has come from Republicans in the Wisconsin Assembly, where Speaker Robin Vos, R-Rochester, has authorized a sweeping investigation by former conservative Supreme Court Justice Michael Gableman.

Bernier has repeatedly criticized Gableman’s investigation, calling it a "charade" and suggesting it could be harmful to democracy. In December, Gableman suggested Bernier should resign.

As the Senate’s majority leader, LeMahieu decides which lawmakers chair committees, and he said there was no chance Bernier would be removed as head of the Senate’s elections committee.

"There's no one more qualified to chair the elections committee," LeMahieu said. "I think in some respects, she's right. We need to look forward. We can't dwell on the past."

But LeMahieu stopped short of endorsing Bernier’s view that Gableman’s investigation should be concluded sooner rather than later.

LeMahieu said he was focused on implementing the suggestions of the nonpartisan Legislative Audit Bureau, which conducted a lengthy review of the November 2020 election. The LAB found no evidence of widespread fraud but it did suggest 18 areas where state law should be clarified, such as where to place absentee ballot dropboxes.

"We'll be working on making those recommended law changes in the spring," LeMahieu said.

As with any changes to election law, the details would be key. GOP lawmakers passed several election-related bills last year only to see them vetoed by Democratic Gov. Tony Evers, who called the measures "anti-democracy."

LeMahieu also said Senate Republicans would use their spring legislative session to address the state’s workforce shortage. He said he was also open to Assembly GOP plans to recruit and retain more police.