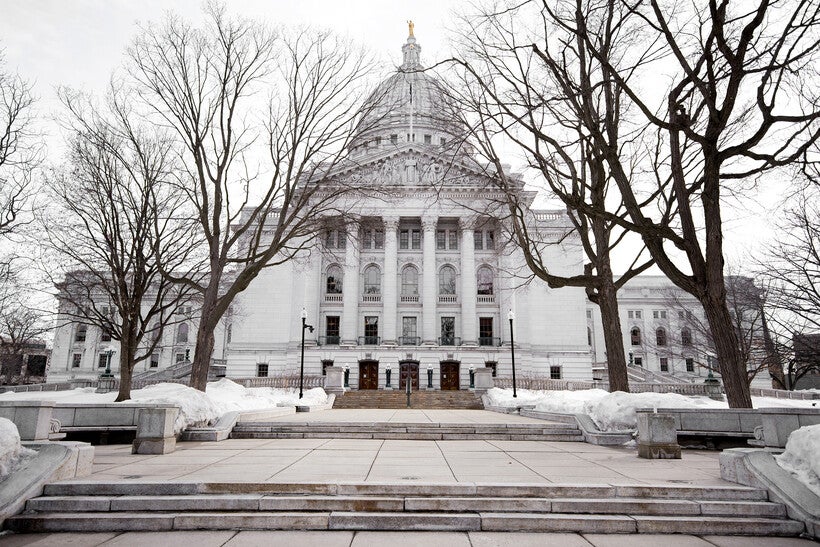 Snow covers the grass in front of the Wisconsin State Capitol on Tuesday, Feb. 23, 2021, in Madison, Wis. Angela Major/WPR

GOP bills would use federal funds to recruit, retain police

The package by Wisconsin Republicans would also require students to be taught 'mutual respect' for officers
By Shawn Johnson
Share:

Republican lawmakers have introduced a broad package of bills they say will support police in Wisconsin, from officer training grants to mandatory classes teaching kids how to respect law enforcement officers.

The proposals, which Republicans say would cost $25 million, would be paid for entirely with federal coronavirus funds set aside in the American Recovery and Protection Act, or ARPA. That alone likely sets up a confrontation with Gov. Tony Evers, who has sole discretion over the funding and has already fought GOP efforts to change that.

Funding aside, the bills themselves include ideas unlikely to fly with the governor. For example, in 2020, Evers called for a package of changes to police laws, including a ban on no-knock warrants. One of the GOP plans unveiled Tuesday would make sure such warrants are allowed by prohibiting cities, villages, towns or counties from banning them.

Taken as a whole, Republicans said the package aims to entice more people to become police officers and keep others from leaving the profession.

"We want our communities to be safe," said Rep. Mark Born, R-Beaver Dam, one of the co-chairs of the Legislature’s budget committee. "This package of bills today will help us retain, recruit and train more folks to help us with that important mission in our communities."

Evers’ office did not immediately comment on the plans, but Democratic lawmakers described the proposals as a political ploy, noting that Evers had previously called for increasing state funding to local governments to pay for police.

"After a decade of underfunding local law enforcement and municipal services, Republicans are desperate to blame anyone but themselves for the consequences of their decisions," said Rep. Gordon Hintz, D-Oshkosh.

The GOP police bills introduced Tuesday include plans that would:

Police officers who joined Republicans at their Madison press conference described the past two years since George Floyd’s murder as difficult ones for police, making it harder to attract new officers and retain veterans.

"I don't want people to think that it isn't an admirable profession because it is," said Dodge County Sheriff Dale Schmidt. "Law enforcement is not a career. It's a calling."

But the trends in police funding had been in motion well before Floyd’s murder according to a report released last year by the Wisconsin Policy Forum. It found that police departments across Wisconsin saw their budgets cut and the number of sworn officers reduced before Floyd’s death and the national "defund police" debate that followed.

GOP lawmakers could pass the bills in the next few months before the Legislature is scheduled to adjourn for the year. Should Evers veto the plans, Republicans would likely use them as campaign issues in the 2022 governor’s race.