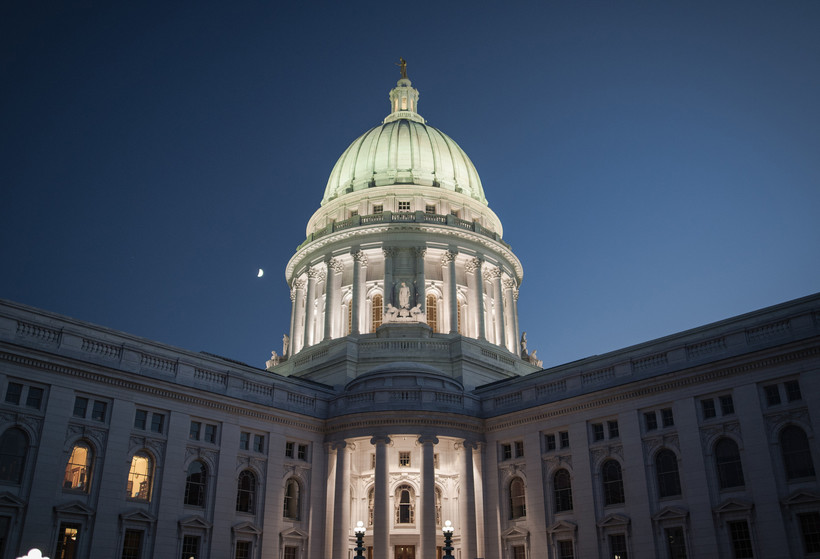 Both Measures Now Return To Assembly
By Shawn Johnson
Share:

Senate Republicans approved a campaign finance bill Friday night that, in a reversal of course, retained a provision allowing people to not list their employer when making political donations.

The Senate also voted to dismantle Wisconsin's Government Accountability Board — the state elections agency that's drawn the ire of many Republicans for its role in investigations into Gov. Scott Walker's campaign activity.

Both plans passed in a rare Friday night session that Republican leaders had scheduled following weeks of negotiation among lawmakers over the divisive bills. The session ended up lasting well into the early hours of Saturday morning, with the vote on the GAB measure taking place at around 2:30 a.m.

The state Assembly is expected to approve the changes the Senate made to both pieces of legislation when it convenes Nov. 16.

As late as Friday afternoon, some Republican senators had hinted they might change the campaign finance bill to preserve Wisconsin's requirement that people making donations to political candidates report their employers.

But once debate on the measure finally began Friday evening, Republicans like Sen. Van Wanggaard of Racine argued forcefully for getting rid of the rule. Wanggaard said his critics used such information to boycott employers during the battle over a 2011 law that restricted collective bargaining for public-sector workers.

"I feel very strongly about that because of the garbage that I went through with Act 10," Wanggaard said.

Democrats like Milwaukee Sen. Tim Carpenter, said the change would leave the public in the dark when it came to finding out which companies were trying to influence lawmakers.

"If you’re going to be prostituted, we want to know where the money’s coming from," said Carpenter.

While the employer provision drew some of the sharpest exchanges Friday night, other changes endorsed by Republicans were arguably much more consequential, including one that would give candidates multiple avenues to coordinate with third-party groups who keep their donors secret. The plan also allows for unlimited donations to political parties and the campaign committees controlled by legislative leaders.

Senate Majority Leader Scott Fitzgerald said the changes were necessary because a variety of courts, both state and federal, had rendered Wisconsin's campaign finance system "illegal."

"It's a new game. It's a new day," said Fitzgerald. "It's not something this body necessarily controls. But it's something ... we have to adhere to."

Democrats, however, said there were better ways to bring Wisconsin's campaign finance laws in line with recent court decisions, and noted that in the landmark Citizens United v. Federal Elections Commission case, the U.S. Supreme Court praised increased disclosure of donor information in its ruling.

"We as legislators and candidates are going to be very bit players when it comes time for a campaign," Erpenbach said.

Sen. Janet Bewley, D-Ashland, said it was a bill to benefit campaigns, not voters.

"How much money is ever going to be enough?" Bewley asked. "There’s no limit! It’s unlimited! This is madness!"

The bill passed 17-15, with Sen. Robert Cowles, R-Green Bay, joining all Democrats in voting no.

Senate Republicans also voted to dismantle Wisconsin's Government Accountability Board, though not before making some changes to the bill the Assembly approved last month.

The original plan would have replaced the six nonpartisan judges who run the GAB with partisan appointees, split evenly between Democrats and Republicans, who would preside over new ethics and elections commissions. Critics said the model was destined for partisan gridlock and was unlikely to get anything done.

An amendment by Sen. Luther Olsen, R-Ripon, would add two judges back to the ethics commission, which he said would reduce gridlock.

"We believe that adding two retired judges to look at the facts before them and make a decision is the way to go," Olsen said.

Just eight years ago, the Senate voted unanimously to create the Government Accountability Board, giving it independent funding so it would have the freedom to pursue investigations wherever they led. Under the new ethics and elections commissions, that independent funding would be gone.

Fitzgerald talked at length about how he felt the GAB had abused its authority in a now-closed investigation of conservative groups and Gov. Scott Walker's recall election campaign. Fitzgerald contended it was the GAB's staff — not the judges — who were "running the show," saying that should scare every senator.

"We should never, never ever have a bureaucrat who thinks they are at the same level or above us making those decisions," Fitzgerald said.

Sen. Julie Lassa, D-Stevens Point, said the real reason Republicans were getting rid of the GAB is that they had an axe to grind.

"They did their job," Lassa said. "They did it well. And they did it effectively."