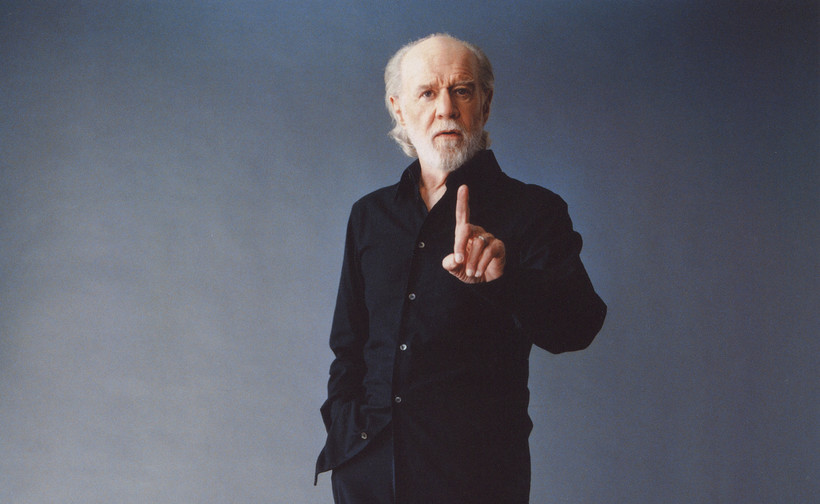 The timeless genius of George Carlin

HBO Max documentary explores the life and career of one of comedy’s greatest voices
By Adam Friedrich
Share:

Editor's note: This story contains language and videos that may not be appropriate for some audiences.

When he was a teenager, just after ninth grade, George Carlin dropped out of school. After escaping his late, abusive father, George had to battle an overbearing mother. When he turned 19, he had had enough and left his Manhattan home to pursue a career in comedy.

According to Patrick, when George left home he gave Patrick a small manila envelope with a note inscribed on the outside directing Patrick to open it when things got tough at home. Something inside would make him feel better. When Patrick finally did open the envelope, it contained a photograph of their father’s gravestone.

It’s just one of the dozens of personal touchstones that are used effectively throughout the two-part, nearly four-hour documentary that sheds so much light on the life and career and motivations of George Carlin, the comedy titan who all but invented the concept of the unfiltered comedy album and taught us the words you can’t say on TV. Carlin died in 2008.

Director Bonfiglio told WPR’s "BETA" that having that kind of access to Carlin's loved ones (including his daughter, Kelly), friends and fellow comics, and his notes really helped complete the story.

"It was really incredible. George was a hoarder, which is a great thing for a subject of a documentary," Bonfiglio says. "Oftentimes when you're working on something where the person is no longer here to speak for themselves, they haven't left behind quite so much as George did."

"Seeing these letters from the early 60s when he and (George's wife) Brenda were on the road and struggling — it humanized him for us," Bonfiglio said.

In his youth, George was obsessed with the musicality and comedic timing of early Hollywood stars and hoped one day to emulate them.

"He looked up to people like Danny Kaye and Bob Hope, but especially Danny Kaye. He always cited (Kaye) as one of his heroes," Bonfiglio said. "He had this dream very early on as a kid. He really wanted to be a comedic movie star, not a stand-up comic. He sort of saw comedy as a way to that ultimate goal of being a movie star, but clearly it didn't quite work out that way, and I think we're all fortunate too that it didn't."

Instead, George teamed up with his radio partner Jack Burns to perform as a comedy team. They were successful enough but eventually split.

George decided to continue solo and began to see the world of comedy changing too.

"It's 1960 and this is a time that comedy is changing and moving away from the post-vaudevillian kind of comedy to more edgy stuff. People like Lenny Bruce and Mort Sahl; the Second City; the Compass players Nichols and May," Bonfiglio said. "George was going back and forth. After Burns and Carlin broke up, (George) was trying to find his way."

It was during the Vietnam era when George eventually realized that as comic in his 30s, he was relating more to the movement of the people in their 20s while performing for audiences in their 40s. He slowly began a "detransformation" away from the suit and tie comedy into the long-haired and bearded and anti-authoritarian comic he would be best known for.

Apatow and Bonfiglio’s documentary shows a fascinating passage where icon Bette Midler recounts the time when George attempted this new style of comedy.

"Bette Midler, interestingly enough, happened to be opening for him that night, and it was at the Playboy Club in Lake Geneva, Wisconsin. And George was playing to a very, what he would call, a very square audience. And he began to talk about consumerism and the Vietnam War. And he was basically run off the stage.”

"It was a seminal moment for him because he realized that the people that he was performing for were not the people that he related to, and he didn't want to relate to those people. So those confrontations helped fuel his decision to change his persona, change his act and detransform into who he really felt comfortable being as an artist," Bonfiglio said.

George would experience another seminal moment in the dairy state a few years later in 1972 when performing his famous routine of The Seven words You Can't Say on Television at Summerfest in Milwaukee.

"There were police present who objected, and they arrested him. And he spent a night in jail, brought into court. And oddly enough, a young assistant (district attorney) happened to be at Summerfest. And what George was arrested for ... it was not an obscenity charge. It was disorderly conduct, profanity."

That assistant DA, Tim Schneider, was brought in by the judge to confirm if it was indeed disorderly conduct. He testified that it was not and that in fact, the crowd had given George a standing ovation.

"Oddly, the assistant DA served as a witness for George ... and explained to the judge in court that there was no disturbance caused by these words, and so he was let go," Bongfiglio said.

As the 70s were coming to a close, George began facing a surprising and somewhat hurtful backlash from both audiences and his fellow comedians, like Cheech Marin and the cast of SCTV.

"He really hated being the butt of jokes. And he really did not like not being the guy who was being celebrated anymore. And I think that that drove his next creative phase," Bonfiglio said.

That next phase of George's career is likely the most notorious. In fact, it's quite common to see clips of these HBO specials surfacing today reflecting a cynical prescience in George's work. Or perhaps a timelessness to his craft.

"I think the fact that so much of what he talked about is still relevant is really disappointing. When you see him talking about the environment or big pharma or police brutality in the early 70s, and things really haven't changed at all," Bonfiglio said. "Comedy as an art form is generally kind of ephemeral. It's often of its moment, and you don't usually go back decades to find wisdom in comedy. And with George, that's just not the case."

Bonfiglio said that this lack of change also explains why George's commentaries surface so often on social media today.

"I think he would react very similarly to how he reacted to the times that he lived in. I think he would be appalled and disappointed by our lack of caring for one another, by our greed, our hypocrisy, the way that our society is structured to benefit the wealthy and hurt the poor. I think we have our answers as to how he would feel based on the things that he said during his lifetime, because things haven't really changed for the better, by and large."