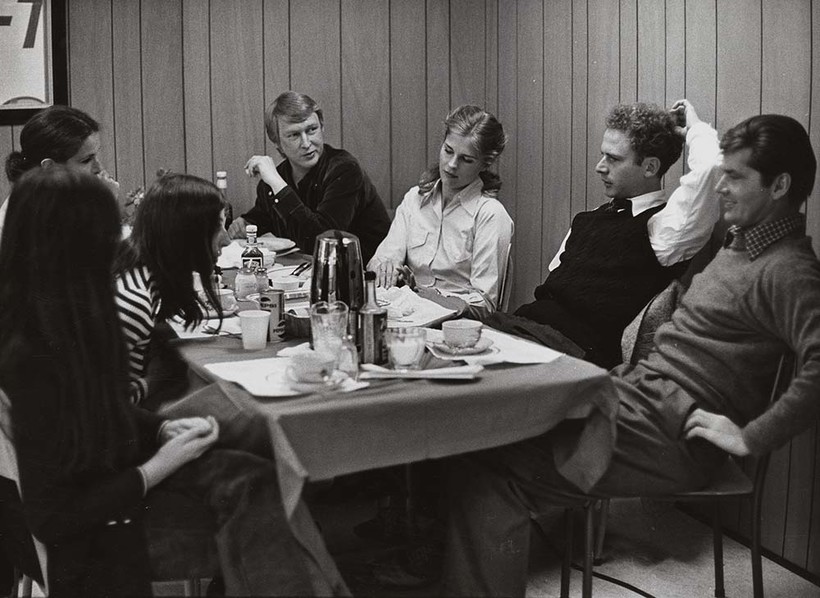 Nichols with Candice Bergen, Art Garfunkel, and Jack Nicholson on a break during the 'Carnal Knowledge' shoot. American Society of Cinematographers Collection/Margaret Herrick Library/Academy of Motion Picture Arts and Sciences

The Lasting And Influential Legacy of Mike Nichols

The lasting, varied and inimitable legacy of director Mike Nichols began when he was a boy. In his gripping and comprehensive biography – "Mike Nichols: A Life" – journalist and author Mark Harris traces the icon's origin story to Nichols' own preferred starting point when he was only 7 years old.

That was in 1939 when Nichols fled Germany ahead of the war and arrived in America with his younger brother. Harris tells WPR's "BETA" that Mike had a rough start to his new life in America.

"Mike had lost all of his hair because he had a reaction to a (whooping cough) vaccination that robbed him of the ability to grow hair for the rest of his life. So he really began life in New York City as a refugee and a kind of double outsider, a kid who didn't sound like other kids, a kid who didn't look like other kids. And then at a fairly early age, his father died," Harris said.

It's apt then, that Harris opens his biography with an epigraph quoting Nichols: "Disaster can reorder our lives in wonderful ways."

Harris says that Nichols used that outsider standing to sharpen his power of observation. That skill set was the ignition point that led Nichols to not only master, but innovate in both comedy and directing.

"Mike had to look at other kids and assess who are the popular ones, how do they act," Harris explained. "That kind of precision, that time he took to notice things, really fueled his first big career before he ever became a director, which was as an improv comic performer with Elaine May. I mean, all of their comedy depended on really close observation of the little tics and vanities and insecurities and pretensions of the people that they were playing."

After meeting each other at the University of Chicago, Nichols and May worked together on a series of stage performances and sketches that made them realize their nearly perfect suitability for one another. They laughed at all the same things and quickly worked out that they complimented each other brilliantly. The pair ended up becoming one the most influential comedy duos in history.

Harris says that Nichols carried that same specificity that made him successful performing into his next foray of directing for the stage and screen.

"(Nichols and May) had to play it in a way that was recognizable to an audience, and I think that once Nichols stopped being a performer in 1962 and became a director a year later, he carried that over into his work with actors. It's the kind of performance that he really liked to draw out of an actor, something very specific and very real. And it's also the kind of performance that he could help an actor find their way to," Harris said.

In 1966, Nichols directed his first film, the adaptation of the Edward Albee play "Who's Afraid of Virginia Woolf." The film starred real-life partners and superstars Richard Burton and Elizabeth Taylor. Harris says that Nichols forged a phenomenal working relationship with the larger-than-life actors by creating an us-against-the-world attitude with them.

"Mike's attitude was sort of complicity. He would say, 'You and I are partners in this creative thing that we're going to do. And our job is to push everyone who wants to interfere away and just try to do the best thing we can do. My job is to try to get the best performance from you and your job is to just come ready to do it,'" said Harris.

What made this feat even more remarkable was that in addition to being the center of the Hollywood universe, Taylor and Burton had drastically different approaches to acting.

"Burton was very serious actor. He'd done a lot of stage work. He had done a lot of classics. Elizabeth Taylor had never even been in a rehearsal before," Harris said. "Yet they both trusted him completely. And that was a hallmark of Mike's work with actors throughout his entire career, that he knew not just what every actor needed, but the different thing that each actor needed to create that kind of trust."

Nichols is probably best known for his 1967 film "The Graduate," starring a then-unknown Dustin Hoffman. While he vouched and fought for Hoffman to play the part of Ben Braddock, their relationship wasn't as rosy as the one Nichols enjoyed with Taylor and Burton.

"When Hoffman wasn't getting something or when Mike wasn't happy with what he was getting, he could be really tough. Dustin Hoffman told me by the end of the shoot, 'I don't think they really cared whether I lived or died.' And I think he was half-kidding," recalls Harris.

"The Graduate" would go on to garner Nichols an Oscar for his directing and became a landmark film still influential today. Harris argues that its sustaining power isn't built on being a time capsule of the late sixties or for the titular Simon and Garfunkel pop song, but for Nichols' ability to again capture that cross generational humanity.

"I think one really unusual thing about 'The Graduate' is that it can be taken different ways depending on the age you are when you see it. I mean, I first saw 'The Graduate' when I was younger than Benjamin, and he seemed like a real hero to me. And as you go through your life, in many ways, he becomes a less and less sympathetic character. When I was in my 40s, suddenly I thought the heart of this movie is Anne Bancroft's character, Mrs. Robinson," Harris said.

"Nichols always really insisted, and so did Buck Henry, the screenwriter, that it was really a movie about a privileged, cosseted young man who was slowly beginning to rebel against the materialism and affluence that he had been absolutely surrounded by from the time he was a child. And I think that theme stands the test of time a little better than a very specifically late 1960s take on youth versus middle age would have," he added.

In the acknowledgements of "Mike Nichols: A Life," Harris admits that during the writing process, there wasn't a day that passed when he didn't wish he could ask Nichols — whom Harris had in fact interviewed earlier before his death in 2014 — one more question.

"I'm not sure what the one question would be, but I know that the first word of the question would be 'Why'," Harris said. "There were places where it would have been really illuminating to hear what he thought about why he did something. Without that, it was my job to do everything I could to figure it out anyway."