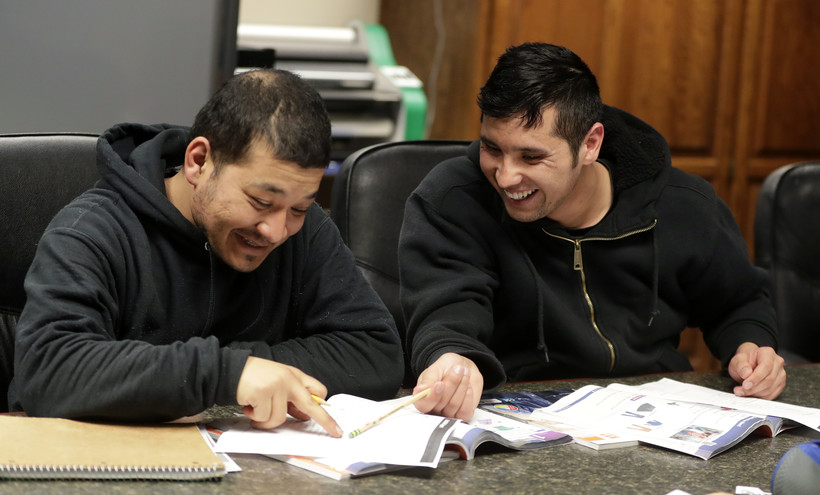 Mohammad Ali Afshar, right, and Hedaiatullah Azim participate in an English class on April 14, 2022, at Faith Lutheran Church in Allouez, Wis. Before fleeing the country, both defended the U.S. Embassy in Kabul as part of the Afghanistan military’s special operations, said Mike Ruminski, who has helped Afghan evacuees obtain their driver’s licenses, enroll in English classes and connect with job specialists. Sarah Kloepping/USA TODAY NETWORK-Wisconsin

'They can bring so much': Despite barriers, Afghan evacuees enrich Wisconsin’s workforce

Wisconsin is in a labor crunch. Evacuees and other immigrants can help — if they can navigate transportation and other obstacles.
By Zhen Wang | Wisconsin Watch
Share:

Ali Akbar Gholami arrived in the United States last September with little more than his work ID. He had no time to gather much else as the Taliban took over the Afghanistan capital of Kabul and escalated a humanitarian crisis, prompting the U.S. to airlift him and 76,000 Afghan nationals to safety.

But Gholami — who speaks fluent English, studied civil aviation for two years and previously worked at Kabul International Airport — brought skills and a work ethic that American employers desire amid a tight labor market. That’s particularly the case in Gholami’s new home state of Wisconsin, where the unemployment rate has dipped below 3 percent, pushing employers to boost salaries and benefits to attract and retain talent.

Gholami, 23, arrived in Green Bay in October 2021 after flying to Qatar for security vetting and then to Holloman Air Force Base in New Mexico, a staging area for thousands of evacuees. His top priority upon arriving in Green Bay was the same as other working-age evacuees: find a job before his initial three months of federal resettlement aid ran out.

"We just start from zero. That’s why we need more money to pay the rent and send some money back to Afghanistan to our parents," said Gholami.

He initially trimmed meat at a local JBS Foods plant before Catholic Charities, a nonprofit resettlement agency, connected him with BelGioioso Cheese. Now he earns $24 per hour packing mozzarella blocks into boxes from 3 p.m. through midnight or later at the company’s plant in Appleton.

But Gholami faced a challenge: Without a car or driver’s license, how would he commute between his apartment in Green Bay and the cheese plant? It’s a roughly 19-mile route inaccessible by bus.

He is among at least 838 Afghan evacuees — including children and elderly people — now living in Wisconsin. These newcomers can make communities more vibrant and ease the labor crunch as Wisconsin’s birth rate plunges and its population ages. The same could be said of future refugees from other countries, including Ukranians fleeing Russian President Vladimir Putin’s war.

Many employers have expressed interest in hiring Afghan evacuees, said Bojana Zorić Martinez, director of the Wisconsin Department of Children and Families’ Bureau of Refugee Programs.

"We’re very pleased, at least from what I’m hearing, with how employment is going," she said. "There are a lot of employment opportunities all across the state."

Federally contracted resettlement nonprofits have helped Afghans find housing and jobs, but they aren’t equipped to address all employment barriers.

"Having a new population of Afghan immigrants is just another opportunity to help bolster our workforce," said Missy Hughes, secretary and CEO of the Wisconsin Economic Development Corp.

She added that employers must understand their workers’ traumatic experiences and help them succeed.

"Businesses have to be a part of this resettlement. They can’t just be a recipient of this human being," Hughes said.

In Gholami’s case, his new employer loaned him money to buy a car. And volunteers are filling other gaps. Mike Ruminski, a Green Bay-area man, has helped Gholami and seven other Afghan evacuees obtain their driver’s licenses, enroll in English classes and connect with job specialists.

Ruminski also bought two computers to allow Gholami and his three Afghan duplex mates to use the internet to set up their new lives and connect to families back home.

"He said, 'Whatever you need to do, I can help you,'" Gholami said.

Ruminski teasingly calls the four Afghans in the duplex "The Beatles" — a nod to their youthfulness and friendship forged beneath the same roof in Green Bay. 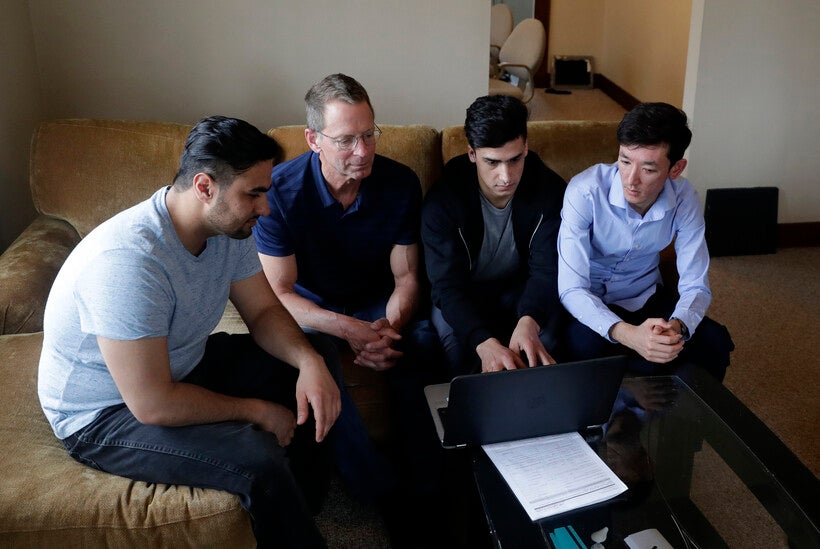 'Transportation is a critical need'

On a sunny Tuesday morning last February, Gholami exited the Green Bay DMV service center with pride and excitement: He had passed his driving test.

Ruminski was waiting. He had lent Gholami his 2009 blue Toyota Prius for the test after helping him train for two weeks.

The two met months ago at a local YMCA. Ruminski is a longtime Bay Area Workforce Development Board director and a self-employed health insurance advisor who previously trained commercial truck drivers. He offered Gholami and seven other Afghans roughly 12 to 16 hours of training each and access to his car so they could get their licenses.

Gholami practiced behind the wheel on weekends and between cheese plant shifts. Ruminski guided him on traffic laws that don’t exist in Afghanistan, such as how to navigate roundabouts.

Transportation "is a critical need for people trying to become self-sufficient," Ruminski said. 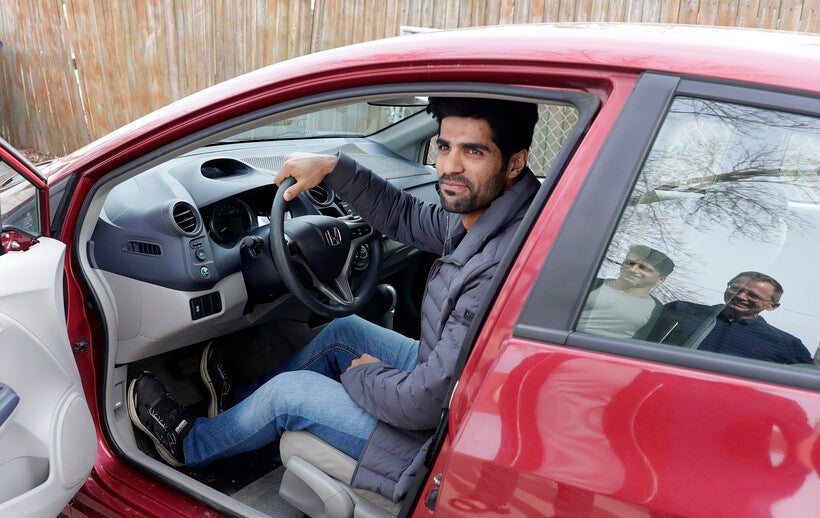 After receiving his driver's license earlier in the year, Ahmad Samim Samimi tests out a vehicle for sale while talking to Fayaz Nabizada and Mike Ruminski on April 10, 2022, in Allouez, Wis. Transportation "is a critical need for people trying to become self-sufficient," says Ruminski, who has helped local Afghan evacuees obtain driver’s licenses, enroll in English classes and connect with job specialists. Sarah Kloepping/USA TODAY NETWORK-Wisconsin

That’s true across Wisconsin, where many poor people and those with disabilities lack transportation. Americans typically spend 19 percent of their income on cars, which many communities in Wisconsin and elsewhere have long prioritized over public transportation walking and biking.

Transportation is also one of the biggest hurdles for Afghan evacuees in Milwaukee, said Sheila Badwan, vice president of the Milwaukee chapter of the Hanan Refugee Relief Group. The Milwaukee region hosts the state’s biggest Afghan cohort, with more than 380 resettled as of April 20, according to Zorić Martinez.

Some use the Milwaukee County Transit System, and English-speaking Afghans assist those still learning the language.

But a lack of public transit between the city of Milwaukee and surrounding communities leaves those working outside the city struggling to find rides.

"They don’t want to sit at home. They want to work. They’re hard workers," Badwan said. "How do they get to their jobs?"

In Green Bay, some companies send vans, arrange carpools or find other options to transport Afghan employees between home and work, workforce officials say. Among them: JBS Foods, which has hired 26 resettled Afghans at its Green Bay beef plant — including Saboory, 25, who works long hours as an interpreter and takes English classes twice a week in his free time.

"Once you expand beyond Green Bay, public transportation becomes far more limited," he said. "And in some cases, it doesn’t even exist."

"I didn’t expect that they would help me," Gholami said.

Green Bay’s 126 resettled Afghans are accelerating northeast Wisconsin’s racial and ethnic diversification, which has seen the bulk of its population growth in the past decade among people of color. Ruminski has spent years volunteering with groups that have helped refugees and other immigrants settle around Green Bay. He is humbled by the Afghan evacuees’ courage and initiative.

Former President Donald Trump limited immigration — including refugee resettlement — during his presidency in the name of protecting American jobs. That sentiment may linger among Trump’s fans in Wisconsin.

But Ruminski and Hughes, of the Wisconsin Economic Development Corp., counter that Wisconsin needs refugees and immigrants to help fill thousands of open positions statewide.

"We have many more job opportunities than we have people," Hughes said.

According to a 2021 report by Forward Analytics, the research arm for the Wisconsin Counties Association, "Without natural growth, the only way to grow or even maintain the state’s population and workforce is through migration."

Wisconsin employers have relied on migrant and immigrant labor throughout history. But the state’s net migration rate has slowed in recent years, dropping to less than 1 percent during 2010-20 from 1.5 percent a decade earlier, Forward Analytics reported.

Refugees are typically eager to quickly secure jobs. Despite the trauma they carry, refugee employment rates closely track with those of other immigrants in the U.S., according to a 2020 Journal of Economic Perspectives study.

Local communities just need to offer "a little guidance: to make sure they thrive and stay," Ruminski said.

Whether the Afghans can live their American dreams depends upon securing permanent residency. While each has permission to live and work in the United States, their temporary status leaves them vulnerable to future deportation.

Nearly 37,000 evacuees could qualify for a Special Immigrant Visa, while some of the remaining 36,400 might qualify for asylum, according to a Department of Homeland Security report.

That requires navigating an immigration system that faced backlogs even before the Afghan evacuation. Putin’s war in Ukraine could add more pressure; thousands of fleeing Ukrainians have arrived to the U.S. border with Mexico, and Biden — who has pledged to accept up to 100,000 Ukrainian refugees — has granted them 18-month protected status.

The Biden administration aims to expedite asylum reviews by producing decisions within 150 days of application submissions. But a shortage of immigration lawyers leaves many Afghans on their own to slog through the complicated asylum process, said Erin Barbato, director of the Immigrant Justice Clinic at the University of Wisconsin Law School.

Barbato estimated that 400 to 500 Afghans in Wisconsin are seeking asylum. Few nonprofit law firms are equipped to help, and private attorneys can be expensive, she said.

All four of the Green Bay "Beatles" are applying for asylum. That means proving the deadly risk of returning to Afghanistan and filing an application within one year of arrival here.

Saboory said the Taliban viewed his work as an airport safety officer with suspicion and has targeted family members who still live in Afghanistan: "The Taliban sees me as an enemy, and they say they see me as an American slave."

After Saboory left, Taliban officials searched his parents’ apartment and punched his father in the face when he refused to disclose his son’s whereabouts, Saboory said. His asylum application includes a photo of his father’s bruised eyes.

"I feel very bad to use my father’s picture for my case," he said. "I know my life is in danger and my family is in danger because of me."

Ruminski is hoping to find pro bono attorneys to accept asylum cases from Afghans in the community, which can otherwise cost $4,000 per person.

In February, Ruminski accompanied The Beatles to a Job Center of Wisconsin event, where specialists helped them set education and career goals. 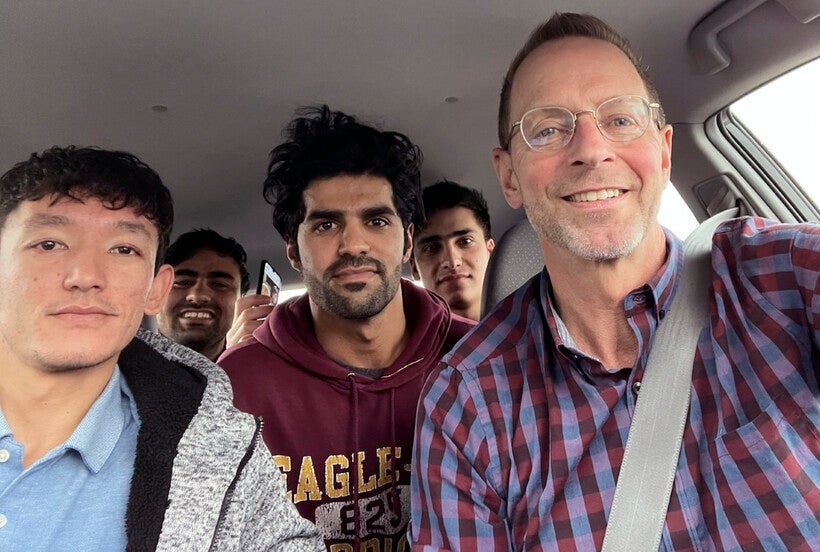 They followed up with a trip to McDonalds — to celebrate those goals and new driver’s licenses.

Saboory said he would like to become a dentist. Gholami aims to return to aviation. Ruminski said at least three other evacuees are eyeing commercial trucking — an industry that faces a shortage of 80,000 drivers nationwide.

"They can bring so much. We just have to embrace that, foster that and care for that," Ruminski said of those ambitions. "It’s an investment in the future. And quite frankly, it’s the humanitarian thing to do to — to bring diversity into our citizens’ lives."

This story was produced as part of the NEW (Northeast Wisconsin) News Lab, a consortium of six news outlets covering northeastern Wisconsin. The nonprofit Wisconsin Watch (www.WisconsinWatch.org) collaborates with WPR, PBS Wisconsin, other news media and the University of Wisconsin-Madison School of Journalism and Mass Communication. All works created, published, posted or disseminated by Wisconsin Watch do not necessarily reflect the views or opinions of UW-Madison or any of its affiliates.