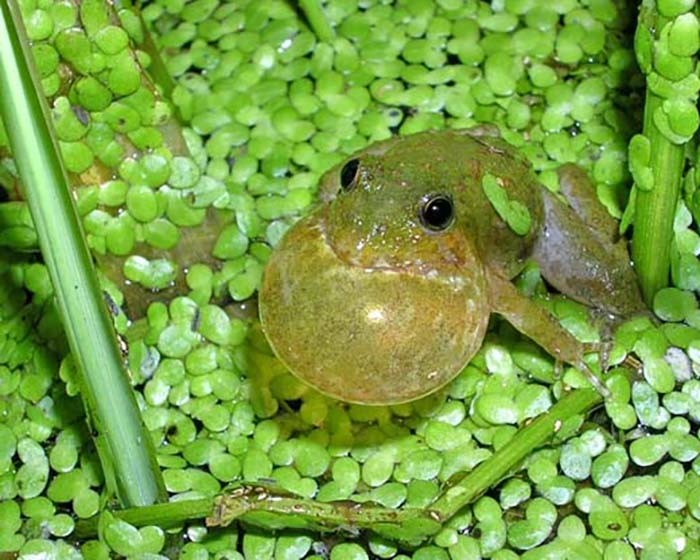 Blanchard's cricket frog calling from shallow water covered by lesser duckweed. Each duckweed "frond" is about 2 mm long, which gives a sense of scale for this diminutive amphibian. Rori Paloski/Wisconsin Department of Natural Resources

Some Species Spotted For First Time Within State Lines
By Miranda Suarez
Share:

State conservationists confirmed the return of Blanchard's cricket frog to Trempealeau County in 2017. Before that, the frog — which is listed as endangered in Wisconsin — hadn't been documented there in more than 50 years.

A volunteer identified the frog by its distinctive call, a clicking sound the Wisconsin Citizen-based Monitoring Network describes as two ball bearings being smacked together.

Blanchard's cricket frog is one of several species the Wisconsin Department of Natural Resources said were discovered or rediscovered in parts of Wisconsin in the last decade.

One newcomer is the evening bat, the state's first new bat species in more than 60 years, according to the DNR.

Evening bats are "an interesting sort of orange-colored, and some say sort of orange-peel-smelling" creature, said Owen Boyle, a DNR conservationist.

Climate change is opening Wisconsin up to new species like the evening bat, which is usually found farther south, Boyle said.

"Not surprisingly, the big limiting factor in Wisconsin is our winter, and when we see species expanding north, it's often because they're able to survive, basically, winters that aren't as harsh as they used to be,” he said.

Other animals' arrivals in Wisconsin are more of a mystery. The eastern pondmussel, a freshwater mollusk, turned up in Medicine Lake, and the DNR doesn’t know why. Boyle said aquatic species are often transported by recreational boaters or anglers, but with the eastern pondmussel, they don’t know for sure.

In the past decade, Boyle estimated 10 to 15 species were discovered or rediscovered in Wisconsin. Some were spotted by trained volunteers.

"The rusty patched bumblebee, which is a federally endangered bumblebee, we've had at least a dozen new counties or counties where the species has been rediscovered because of citizen scientists," he said.

Other species haven’t had the same luck as Blanchard's cricket frog. The Poweshiek skipperling, an endangered butterfly, hasn't been found in Wisconsin for years, Boyle said — perhaps due to habitat loss.

To Boyle, it's important to fund efforts to conserve species while they’re still relatively common, instead of scrambling to keep them alive.

"Legal protection is more expensive, and it’s much harder to recover those species once they get that rare," he said.