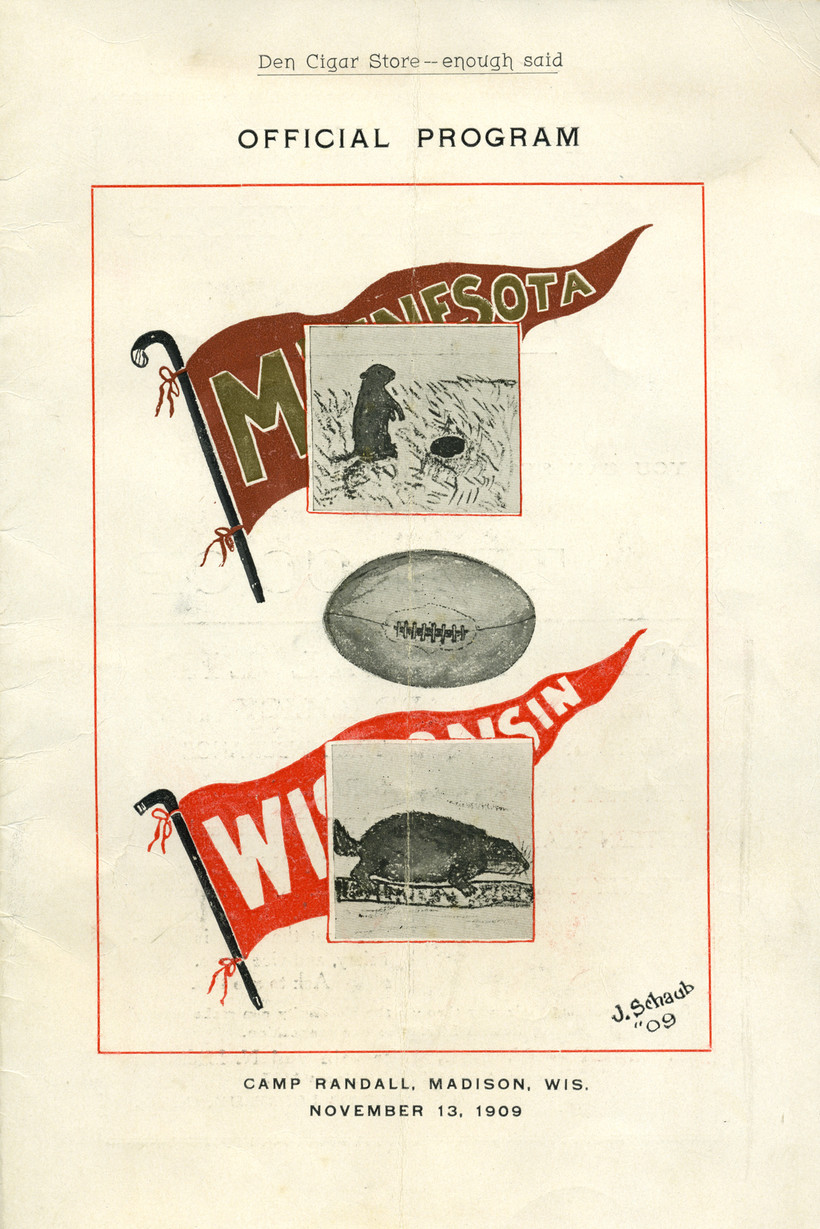 The official program from the Nov. 13, 1909, game between the University of Minnesota Gophers and University of Wisconsin Badgers.

'On Wisconsin' Was Originally Composed For UW's Rival, The University Of Minnesota
By Linnea Rock
Share:

"On Wisconsin" is a song Wisconsinites hold near and dear, especially during football season. Not only is it the famed fight song for the University of Wisconsin-Madison football team, it is also the official state song, just with different lyrics.

The song, however, was not originally intended for Wisconsin, but rather for one of UW's biggest rivals, the University of Minnesota.

The music was composed by William T. Purdy in 1909 and was intended to enter a competition for the University of Minnesota's new fight song. The song's original title was "Minnesota, Minnesota." Purdy's roommate and former UW student, Carl Beck, convinced Purdy to dedicate the song to the UW football team instead of Minnesota and wrote lyrics to accompany Purdy's music.

Here are the original lyrics written by Beck that are still sung today by loyal Badger fans: Then, on Nov. 13. 1909, "On Wisconsin" made its debut at a Badger football game against the University of Minnesota at Camp Randall Stadium in Madison. The UW band performed the song and it quickly gained popularity from there.

Because the song was so well loved, in 1913 Judge Charles D. Rosa and J.S. Hubbard wrote new lyrics making it appropriate to become the state song. In 1959, Rep. Harold W. Clemons introduced a bill to make "On Wisconsin" the official state song. The state Legislature was sure to adopt the correct lyrics, written by Rosa and Hubbard: The song now has greater popularity than just among Wisconsinites. The music is used by thousands of other high schools and colleges, and it was proclaimed "the finest of college marching songs" by John Philip Sousa. It is even used in the 1973 Disney film Robin Hood. The fight scene is portrayed to look like a football game with Lady Kluck triumphantly running down the field and leaving heaps Prince John's soldiers behind her while the music of "On Wisconsin" plays in the background.

To this day the song remains steadfast in Wisconsin culture and evokes memories of tailgating and triumphant football games.