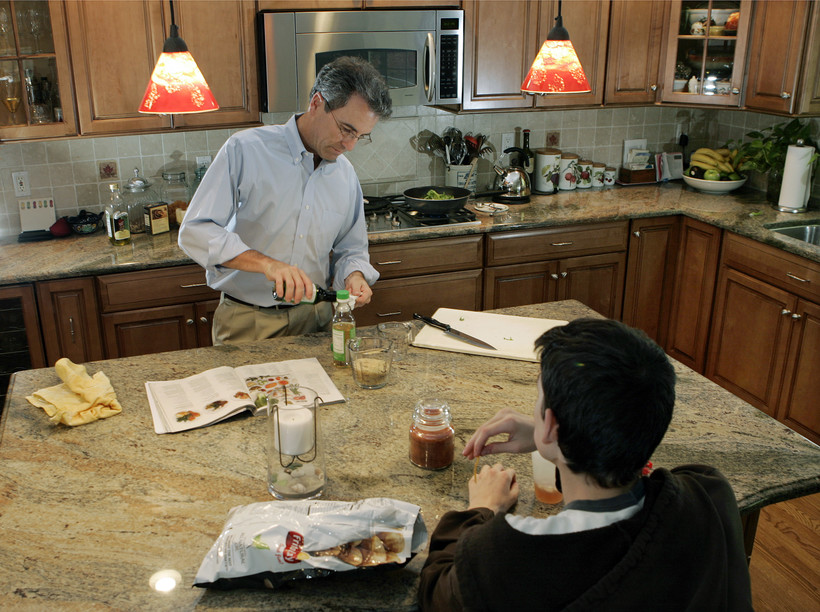 This photo taken Oct. 13, 2009 shows Ryan Worden, 16, having an after school snack as his dad Peter Worden fixes dinner for the family at their home in Chatham, N.J., using a magazine that he discovered offers recipes for a month's worth of varied meals. After being laid off, Worden began carrying more of the load at home. Mel Evans/AP Photo

Who does the dishes in your household?

The answer to that question is more important than you’d think. According to new research, it’s sharing who does the dishes — more than any other household chore — that coincides with a couple’s well-being.

According to a 2012 study, couples today are more willing to share household duties than ever before. Men are more likely to pitch in — they perform on average four hours per week of housework, compared to just two hours in 1965.

That figure — four hours — has been steady since the '90s, Carlson said.

But when Carlson and other researchers looked at daily housework divided by the task, they found that the chores men and women were more likely to do were sharply divided by gender.

Men were most likely to do the shopping and cooking for the household.

"You could say that these are the least onerous ones. These are the ones that might be the most pleasurable to do," Carlson said. "Shopping gets you out of the house, you get to run around. Cooking — a lot of people people love cooking."

Women, on the other hand, were more likely to do the tasks considered less pleasurable — like cleaning the house and doing the laundry.

In general, Carlson said, when couples feel like their household chores are equally divided, they’re more likely to feel happy about the relationship. But as the researchers interviewed couples, they noticed that there was a lot of disagreement.

Part of that, he said, could have to do with gender socialization from a young age. Boys aren’t generally socialized for housework as they grow up, because it’s traditionally not a man’s role. They’re not given Easy Bake Ovens or tiny play vacuum cleaners like girls are.

So some men may not realize they’re not doing much, because they’re not taking responsibility for the tasks in their minds, Carlson said.

The study found that nothing created gender divisions for chores like parenthood. Couples who become parents are much more likely to divide housework more traditionally, with women shouldering most of it.

"They don’t have these gender norms or conventions to just fall back into," Carlson said. "Heterosexual couples often find themselves, without thinking about it, often just kind of falling back into these cultural patterns of what men do and what women do."