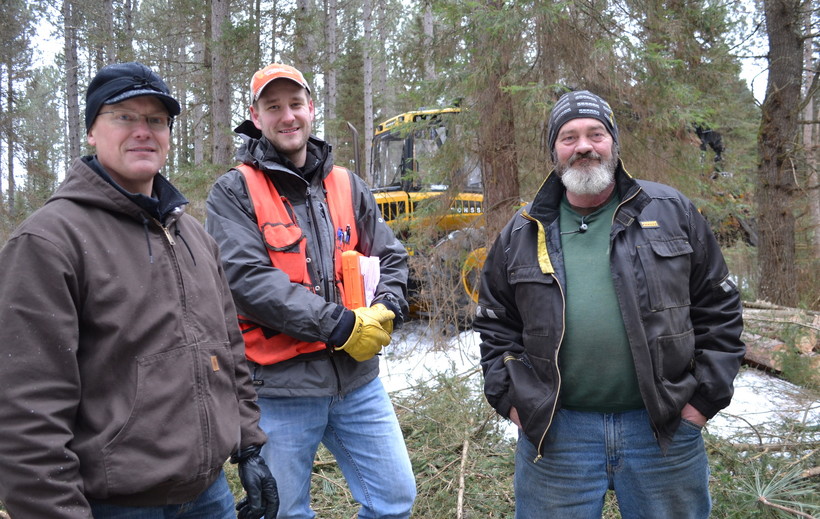 Nature Conservancy And US Forest Service Harvest Timber In Northern Wisconsin Forest For Wildlife And Jobs
By Glen Moberg
Share:

Matt Dallman guided his four-wheel drive truck up a narrow, snow-covered road in the Chequamegon-Nicolet National Forest in Forest County.

Dallman, the director of conservation for the Nature Conservancy in Wisconsin, pointed to a cluster or stand of red pines, which would soon be converted into two-by-four boards as part a program he’s spearheading.

"The Nature Conservancy is managing 380 acres here," Dallman said. "We're going to be harvesting just short of 2 million board feet, and that will equate to about $370,000 of revenue."

It’s a new role for the Nature Conservancy, which Dallman said is often stereotyped as a "tree-hugging organization." The Conservancy now finds itself in the lumberjack business.

"I'm not here to say that we need every tree cut. I think we need old places and we need places that are being managed," Dallman said, "While we want some places preserved, we also want places for jobs and the economy."

The 2014 Farm Bill allowed the U.S. Forest Service and the Nature Conservancy to enter into this stewardship agreement, just one of 13 nationwide. TNC is hiring the loggers, selling the timber, and then using the proceeds for projects the Forest Service can’t afford to do. Simpson Creek will have its trout habitat restored under plans by the Nature Conservancy. Glen Moberg/WPR

Dallman pulled over by Simpson Creek, a fast running, narrow stream whose spring-fed waters had not frozen over in the long, cold winter.

"It's a trout stream that was pretty much beat up from the old logging era. You used to catch 15-inch brook trout in here," Dallman said. "Then they floated logs down it, and it got dammed up."

With the money from the timber sale, TNC is planning to restore the stream by re-routing the channel, and exposing the gravel bottom the fish need for spawning.

TNC is also planning to rebuild a handicap accessible boardwalk on a much bigger trout stream in the forest: the Oconto River.

In nearby Oconto County, TNC plans to use the timber sale proceeds to restore habitat for the endangered Kirtland’s warbler.

At the headquarters of the Chequamegon-Nicolet National Forest in Rhinelander, Forest Supervisor Paul Strong said he is excited about the projects.

"I'm a trout fisherman," Strong said. "You often have to fight your way through the alders and walk long distances. There are very few trout streams you can simply get to and wet a line." Paul Strong, forest supervisor, points to a map of the stewardship agreement area in the Chequamegon-Nicolet National Forest. Glen Moberg/WPR

Strong added that there are even fewer like the Oconto River with its soon-to-be-fixed boardwalk.

"The value of this is making some of these trout streams more accessible for people with disabilities," he said. "People can get out there in wheel chairs and literally be in brook trout heaven"

The U.S. Forest Service could do these projects itself, Strong said, but its budget has been stretched thin, fighting wildfires that have become more frequent and more intense.

"Whether you believe in climate change and what drives it or not, the weather patterns are different," he said. "More of these mega-fires are happening at very high cost."

The Forest Service gets a 20-percent match from TNC and also saves money and manpower by letting its employees and volunteers do all of the work.

Back at the red pine stand, a truck known as a forwarder picked up fresh cut logs with a steel claw and unloaded them into a neat pile.

The Nature Conservancy hired forester Ryan Grefe to supervise the project. He said by thinning the trees, those that are left will be healthier and taller.

"If Mother Nature were to take her course, a forest actually deteriorates over time," Grefe said. "You've got to start taking out the dead trees, the dying trees, the diseased trees."

Grefe said he’s happy that the money is going to stay in northern Wisconsin.

"The opportunity to have some funds directly from a local timber sale go right back into the local economy is just great," Grefe said. "The logging industry, the timber industry, I can’t even think how many people they employ."

One of those people is Clint Wallgren, a burly, good-humored man who has been working as a lumberjack for 32 years.

"It doesn’t get any better than this,"Wallgren laughed, pointing at the trees around him. "Best office in the world."

Wallgren works from the cab of a harvester. Using the controls, he grabbed a tree, cut it down, stripped the branches off and sliced it into neat logs in less than a minute.

"If you didn't have that machine, you'd have ten guys running out here with chainsaws, and pretty much somebody's going to get hurt," he said. A forwarder stacks fresh cut logs on the side of a timber road in the Chequamegon-Nicolet National Forest. Glen Moberg/WPR

Wallgren said good paying jobs are hard to come by in northern Wisconsin.

"If I wanted to stay in the area I don't know what I would do that would pay as well and be as enjoyable for me," he laughed. "I hope I'm middle class anyway."

Environmentalists and loggers have not traditionally gotten along, but both Dallman and Wallgren said it was time for that to stop.

"This distinction between tree-huggers and people that use the forest and loggers, I think conservationists and people that make a living in the woods are one and the same," Dallman said. "Loggers and foresters are really good managers and sustainable managers. They don't want to exhaust their resource because they're in it for the long haul."

"From my experience, tree-huggers didn't want a single tree cut, so it's kind of neat to see that we can work together and see we're not enemies," Wallgren said. "I love the forest just as much as they do."