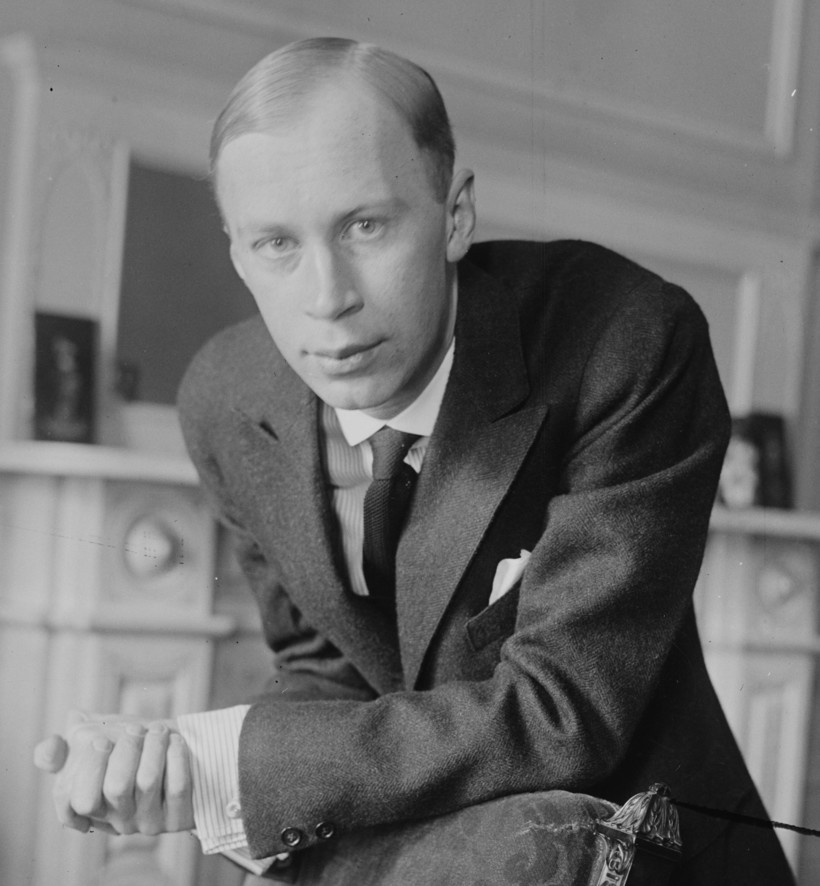 It had worked for Sergei Rachmaninoff.  Sergei Prokofiev thought it might work for him too. So in 1918 he arranged an American concert tour.  He was overlooking some important differences between Rachmaninoff and Prokofiev and between Europe and America.

When Rachmaninoff came onstage he overwhelmed everyone with his six-foot-plus height, his disdainful face and aristocratic manner. He played his own music--piano pieces that were romantic and melodic, easily enjoyed and remembered.  He was an artist of noble origins who was fleeing a revolution Americans had come to distrust.

Prokofiev, on the other hand, bore none of the stamp of the tragic exile.  He was a citizen of the dangerous new Soviet State.  When he walked before the audience in New York's Aeolian Hall he strode onstage smiling, low-key, businesslike.  [He sat down at the piano and proceeded to play without drama and without flourishes.  What was worse--Prokofiev missed a few notes and played on cheerfully as if nothing had happened.]

He had the audacity to play a program that was practically all Prokofiev. Unlike Rachmaninoff, he included not one classical work.  It was only at the manager's insistence that he slipped in a little Rachmaninoff and Scriabin.

"Too little," Prokofiev later lamented.  "Rachmaninoff had more sense.  He added only one or two of his preludes to a program that was otherwise all classical."

The critics worked him over good. [One of them said that the finale of the Second Sonata sounded like "a charge of mammoths across some vast Asiatic plateau."  Others spoke of "Bolshevism in art" and "the epitome of Godless Russia."]

One description stuck with Prokofiev for the rest of his time in America.  It was said that his mechanical playing sounded as if he had "steel fingers, steel wrists, steel biceps, steel triceps—sounded in fact like a music machine."

At the cheap hotel where Prokofiev was staying the elevator operator touched his sleeve and remarked with awe, "Steel muscles!"  Prokofiev recalled, "Evidently he thought I was some kind of boxer."