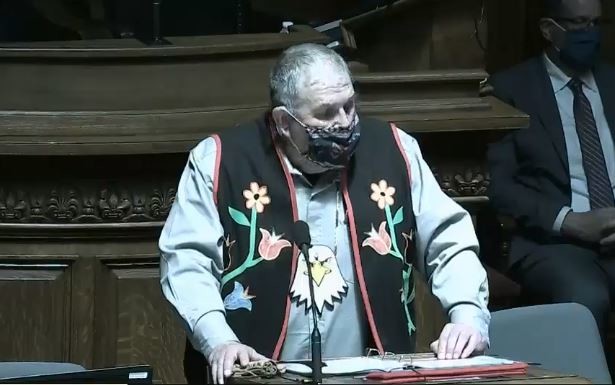 Lac du Flambeau President John D. Johnson Sr., speaks before state lawmakers at the state Capitol during the 2021 State of the Tribes Address on Tuesday, May 11, 2021. Image courtesy of WisEye

State Of The Tribes Address: Tribes Confront Increased Drug Use Due To COVID-19 Pandemic

Native American tribes in Wisconsin are struggling to overcome increased drug use related to the COVID-19 pandemic, in addition to systemic racism and threats to the natural resources on which they rely. Those were some of the issues Lac du Flambeau President John D. Johnson Sr. touched on during this year's State of the Tribes address Tuesday afternoon.

Speaking before Assembly lawmakers at the state Capitol, Johnson emphasized that not only the impact of the COVID-19 pandemic, but increased drug abuse have claimed those most vulnerable during the public health crisis.

Johnson highlighted that fentanyl and methamphetamine continue to impact northern Wisconsin, as well as the nation. Preliminary figures released last month by the Centers for Disease Control and Prevention found deaths from synthetic opioids increased by 55 percent in the year ending September 2020.

"The flow of drugs into the Northwoods has escalated during the pandemic, as mental health, economic and social challenges exert growing pressure on our people and families," said Johnson.

Johnson said abuse of prescription and illegal substances is a "growing threat" for Native and non-Native residents. He noted that funding in Gov. Tony Evers' budget proposal for a regional mental health center in northern Wisconsin is "a crucial building block and a foundation of dismantling the scourge of drugs."

Evers has proposed investing more than $150 million in mental health services, including more than $25 million over the next two years for regional crisis centers, training and other services. Republican state lawmakers have stripped hundreds of proposals from the governor's budget.

During his remarks, Johnson also said tribes continue to face harassment and racism as they defend their federal treaty rights to hunt, fish and gather. He highlighted harassment facing spear fishers, which prompted a warning from state officials.

Johnson also pointed to efforts to reduce or eliminate offensive language toward Native Americans, including Native women and young girls. He called on all organizations and schools to retire the use of race-based mascots.

"Sadly, racially based mascots remained an unhealed wound for countless Native Americans who endure being portrayed as something less than human," said Johnson. 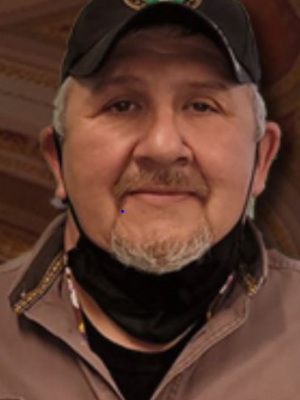 Some schools, parents and community members have argued the mascots are a point of pride, but Johnson said no other community would tolerate being portrayed in such a manner.

"When your children walk out the door, when they arrive at school, do they see something they can feel proud of or something that makes them feel small and ashamed?" asked Johnson.

Tribal members have been pushing schools for decades to drop racially insensitive mascots.

Evers has proposed setting aside $400,000 under the next two-year budget to help schools replace race-based nicknames, logos and team names. Around 30 school districts still have race-based mascots.

'Mining Must Be Rejected'

Johnson also spoke out against mining in Wisconsin. He highlighted the significance of natural resources to Wisconsin tribes. While tribes welcome economic development, he said mining has posed a "constant threat" to the environment and local economies.

"Until there are proven protections in place for public health, safety and natural resources, mining must be rejected as a common threat to all," said Johnson.

State regulators have approved only one nonferrous mine in more than 40 years in Wisconsin, which was the 80-acre Flambeau Mine located along the Flambeau River. The mine, which ceased operations in 1997, served as the impetus for a statewide sulfide mining moratorium.

Republican lawmakers repealed the moratorium on nonferrous or sulfide mines through a 2017 law, which tribes have staunchly opposed.

Toronto-based mining company Aquila Resources, which is seeking to build the Back Forty mine near the Menominee River, has voiced support for new rules implementing the 2017 law. The company has expressed interest in exploring the Reef and Bend mineral deposits in northern Wisconsin.