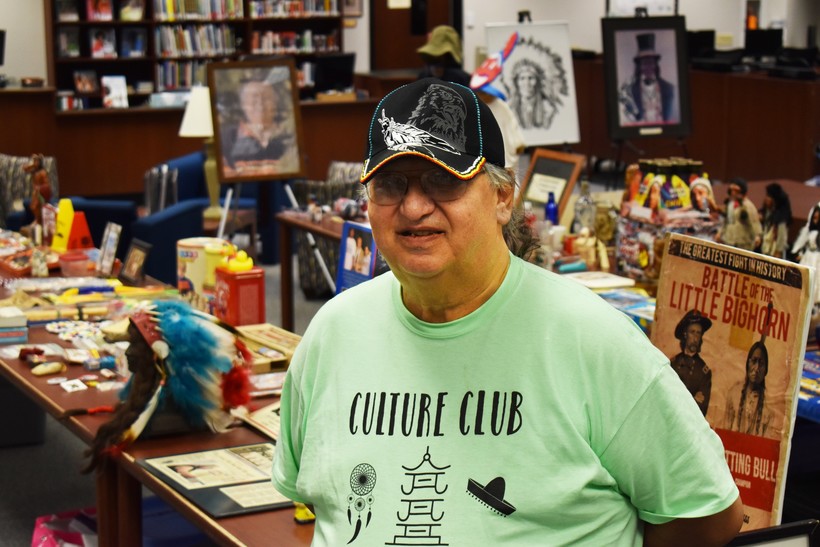 He Acted As His High School's 'Indian.' 50 Years Later, He Calls For Ending Native American Mascots.

Richie Plass was 16 when he became his high school's mascot.

The school principal approached him about it, along with the basketball coach and the athletic director. The Shawano Community High School mascot at the time was the Indians. Plass is Menominee and Stockbridge/Munsee, and grew up on the Menominee Indian Reservation. He was one of maybe 15 Native Americans in the school, and the principal knew he could dance. Would he be willing, they asked, to dress up as the Shawano Indian and perform at halftime?

It was 1968. His time as mascot would last three games, and would end in tears. The experience would be with him for the rest of his life.

Today, Plass is an educator and the curator of "Bittersweet Winds," an exhibit of more than 400 artifacts that show how Native Americans have been depicted in culture — from caricatured mascot images to plastic toys and old cowboy movies. In November, more than 50 years after he graduated, he came back to Shawano High School to show the exhibit in the school library. Plass is also an activist, calling for an end to Native American mascots in schools and professional sports.

That push to retire Native mascots in Wisconsin got a statewide platform this week at a state educational association, but supporters' efforts fell short.

The Wisconsin Association of School Boards at its annual convention considered a resolution calling on all Wisconsin schools districts to retire any remaining Native American mascots, symbols and imagery. Eighteen school districts from around the state offered their support for the resolution ahead of the convention. There are about 30 high schools in Wisconsin that use Native American names or mascots. On Wednesday afternoon, the resolution failed 101-218.

The resolution was created by Wausau School Board president Tricia Zunker. Zunker, a Ho-Chunk woman who is also running for Congress as a Democrat in the 7th Congressional District, cites research showing psychological and educational harm from the mascots to both Native and non-Native students.

"It still does affect (students') perceptions," Zunker said. "And it affects their educational experience outside of the classroom."

The Wisconsin Association of School Boards is a lobbying body; it wouldn't have had the power to force any district to make a change. But the group's adoption of the resolution would have been seen as progress by those, like Plass, who argue the use of Native Americans as mascots devalues the humanity of actual Native Americans.

How Performing As Mascot Went Wrong

Before he agreed to act as Shawano's mascot, Plass went to a tribal elder to ask if he should do it.

He got a fake feather headdress and some moccasins mass-produced in Asia.

"Everything in (the costume) was all fake," he said. "My little necklace thing was plastic. I even had a rubber tomahawk." 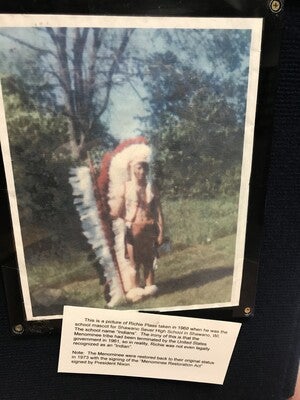 A photo in the "Bittersweet Winds" exhibit shows Richie Plass dressed as an Indian mascot in 1968. Rob Mentzer/WPR

A couple of members of the basketball team who were Native told him they supported him. He said he had classmates and friends who told him, "Hey man, show them how proud we are." When he ran out in front of the full gymnasium, the crowd cheered for him, and he spotted his parents and many people from the reservation in the crowd. It felt good.

He'd only agreed to perform once, but he said the principal convinced him to go out again at the next game. Again he felt supported.

Then came the away game. Plass went with the team to Kaukauna, a Fox Valley city about an hour's drive away. Here, things were different. There were no friends and relatives from the reservation to cheer for him. As soon as he ran out into the gym, he said, the crowd laughed and taunted him. They made the derogatory war whoop sound stereotypically associated with Native Americans.

"And then I can specifically remember orange peels, banana peels and paper cups being thrown at me," he recalled. He backed up, toward the perimeter of the gym. "And that's when the guys in the top row started spitting on me."

Plass ran to the locker room, in tears. When the principal and the basketball coach came in to talk to him, he told them he quit.

The whole experience, he says now, shows the psychological toll the use of Native American mascots can take. It's why Plass still talks about the experience decades later. And it's why he makes little distinction between mascots that use Native imagery in a cartoonish way and those that use more restrained images. By their nature, he says, they reduce Native people to stereotypes.

Plass is still deeply engaged with the issue. In October, the Clintonville School District in Waupaca County canceled its homecoming football game and dance after a video posted online showed a group of students doing a mock tribal dance at a school pep rally. Later that month, Clintonville invited Plass to display "Bittersweet Winds" at the school. From there, he went on to Milwaukee and Washington, D.C. before returning to show the exhibit in Shawano.

The exhibit includes artifacts from the 19th century to the present, and a huge range of depictions of Native American images. Many of them are thoughtless stereotypes — plastic "peace" pipes ("They're pipes," Plass said. "'Peace pipe' is a white man’s word"), glassware with cartoon Natives on them. Some are openly racist, such as a sign from a bar in 1928 Oklahoma that reads "No liquor served to Indians after sundown." Other artifacts are positive images, including images of Native lacrosse players or from the film "Smoke Signals," written and directed by Native Americans.

Plass said the point of the exhibit is to show a range of depictions, and allow viewers to consider the images and their effects for themselves.

In Shawano, as in Clintonville and elsewhere, Plass said he had a warm, respectful reaction from students, who showed interest in the exhibit. In 1993, Shawano High School changed its mascot from the Indians to the Hawks.

Decades Of Protest To Change Mascots 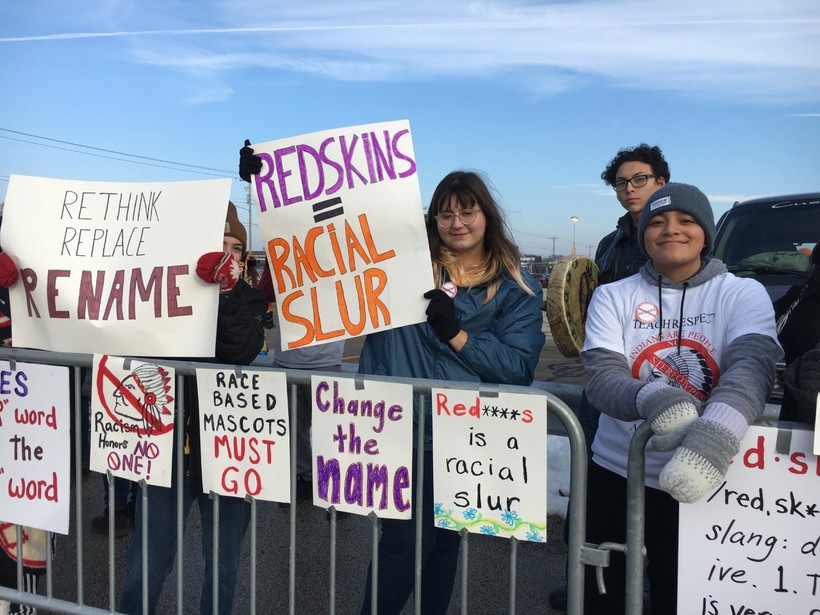 Isabella Saiz, 14, and her friends protest the name and mascot of Washington's NFL team outside Lambeau Field in Green Bay on Sunday, Dec. 8, 2019. Megan Hart/WPR

When the Washington, D.C.'s NFL team came to Green Bay in December, Plass was one of the protesters that greeted them at Lambeau Field with drumming, chanting and protest signs. The team attracts protests because its name is a racial slur, and it is the most high-profile example of such a name. But there are hundreds of teams across the country that employ Native imagery, as well as dozens in Wisconsin.

Barbara Munson, who was at the Lambeau Field protest, has been pushing to eliminate Native American mascots for decades.

"We started in 1997 to work together and in concert with others to work toward elimination of race-based Indian mascots from Wisconsin public schools," Munson said. "Since that time, we've seen 36 Indian mascots change in the state of Wisconsin and that's really good, but there's still 29 left."

Munson's message to those districts is simple: "Really, it's time for a change." 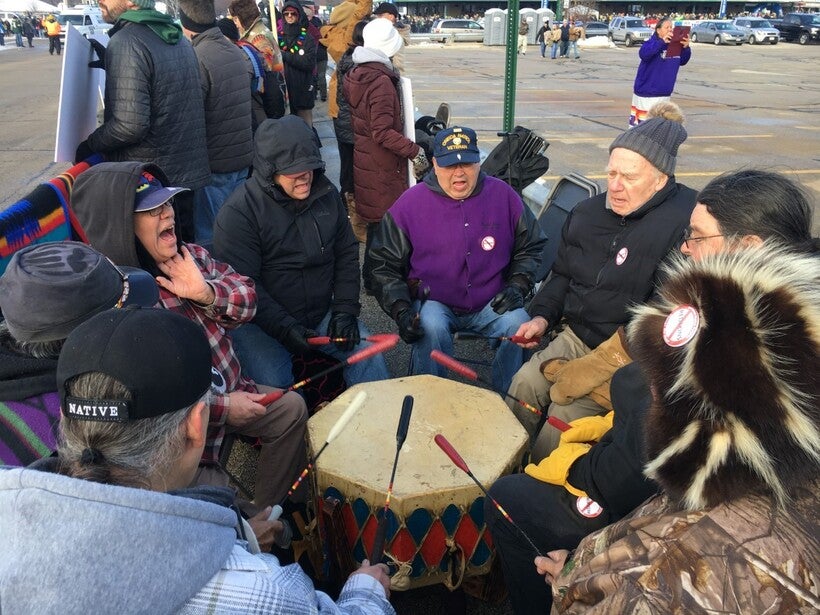 A few days after that Lambeau Field protest, one more Wisconsin district made the change. The Menomonee Falls School Board voted to change its mascot from the Indians. The divided school board there took the vote after protests from parents who called on the school to resist changing the mascot.

At the Lambeau Field protest, Isabella Saiz, 14, summed up her views on the debate.

"We are people," Saiz said. "We will never be mascots."