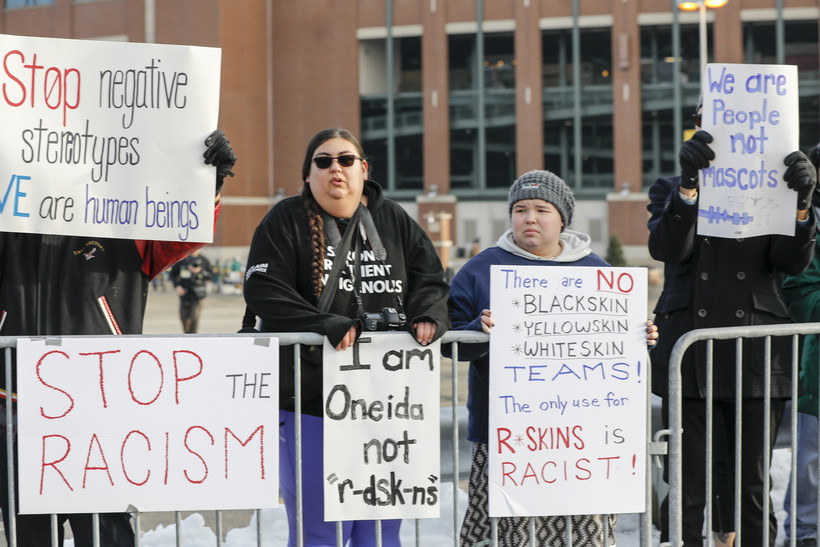 'If It's Not A Financial Issue, Then What Is It?': Evers Proposes Money To Help Schools Change Mascots

The Weyauwega-Fremont School District stopped using its nickname — the Indians — internally years ago, and phased out its headdress logo. But it wasn't until 2020 that the district’s board of education voted to officially retire the mascot. And according to District Administrator Phillip Tubbs, the transition was a long road.

Now the Evers administration is hoping to make it easier for Wisconsin schools to move away from race-based mascots by including $400,000 in its 2021-23 state budget proposal to create a program that would help schools with the process through grants.

"We are in a period in time, not just here in the state but across the country, where there is a reconciliation around issues of race," said Lt. Gov. Mandela Barnes. "And for too long, our tribal communities, our native nations have been marginalized."

The coronavirus pandemic has been hard on high school athletic departments that rely on ticket and concession sales for revenue. But the move by the Evers administration aims to remove the financial barrier that might be stopping some districts from making a change, Barnes said.

"And the question then becomes, if it's not a financial issue, then what is it? What's truly stopping people from changing their mascots and updating the way that they view another race of people in our state?" he said.

Located near Waupaca, the Weyauwega-Fremont School District received nearly 100 new mascot ideas from the community, before a subcommittee of school board members, administrators, students, staff and parents ranked their top eight, Tubbs said. From there, it was clear there were four favorites: the Warhawks, the Hawks, the Red Hawks and the River Hawks.

Between those four, more than 900 votes were cast on the district’s website, with the Warhawks a clear winner. The Weyauwega-Fremont Board of Education approved the name change last month.

But rebranding isn’t exactly simple. Before officially changing its mascot, the district had been using a 'WF' logo. It attempted to copyright the design last year, but ultimately it was too similar to the "Motion W" used by the University of Wisconsin-Madison. Now, the university is helping the district design a new logo, Tubbs said.

In some ways, the district will have an easier time with the transition than others might. Its old headdress logo is no longer displayed in hallways or on athletic courts, Tubbs said. Still, he hopes the Weyauwega-Fremont School District might be eligible to receive funds if they’re made available through the budget.

"Going ahead with the Warhawks, we obviously are going to want to purchase new warmups and uniforms and all these different things," he said.

There was some pushback in Weyauwega, but the name change has also received support from American Indian groups, Tubbs said.

"If there are people out there that are offended by it, then it's the right thing to do to change it," he said.

The budget is now in the hands of Wisconsin’s Republican-controlled Legislature, which will rework it before passing its own version this summer.