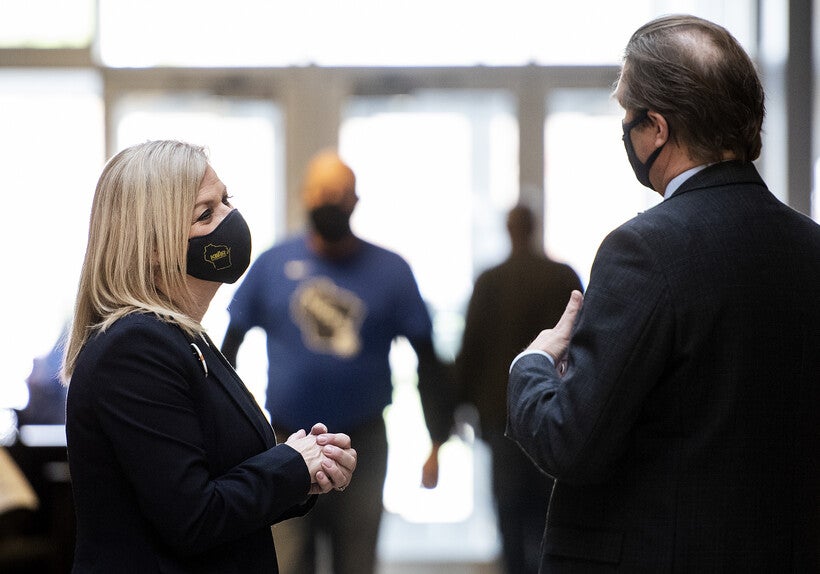 When Deborah Kerr talks about her vision for the state Department of Public Instruction, she likes to point out "quick wins" she'd want to knock out early on.

In the immediate aftermath of the coronavirus pandemic, for example, she wants to bring retired teachers back into schools to help school districts close any gaps in student learning from COVID-19-related disruptions. She said she'd work with the Legislature to make that possible without affecting the teachers' pensions, which are based on their years of experience and salary.

"These people, they love kids, they're trained, they're experienced, and we're going to need all the help we can get, all hands on deck," said Kerr, the former superintendent for Brown Deer schools. "That would be really critical to helping schools so they don't have to commit to the long-term legacy cost of a teacher and not knowing how they're going to use them in the future. So, I think that could be a win-win for everybody."

Another quick win would be putting more state funding toward students with special needs, freeing up money in districts’ regular education budgets.

"Every school in the state has children with special needs, so if we have more reimbursement, we would get more money at the local levels," she said. "That would be a win-win for everybody."

While campaigning for the state's top schools position, Kerr has touted her ability to work with groups and politicians across the political spectrum and in all facets of education — from private and charter schools to traditional public schools and from early education to college and career and technical education.

Kerr will face Jill Underly, superintendent of the Pecatonica Area School District, in the April 6 election. 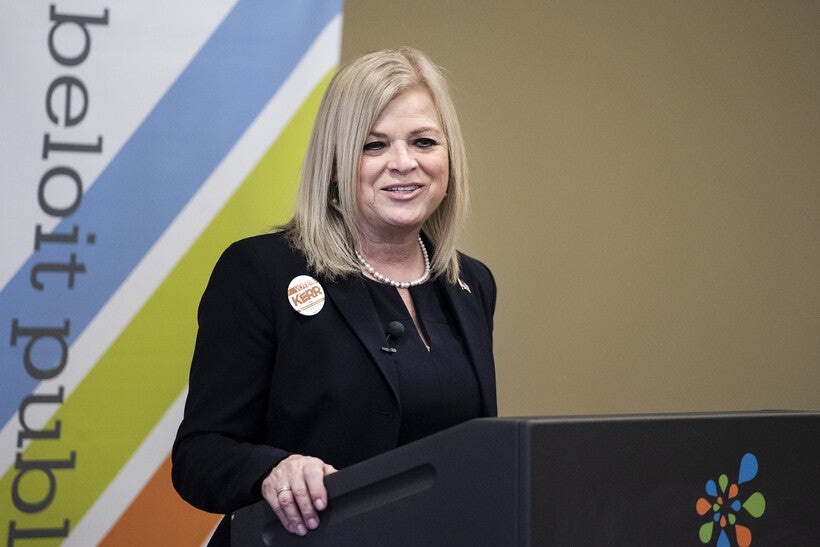 A Focus On Reopening Schools

Throughout her campaign, Kerr has pushed for school districts to reopen in-person education across Wisconsin. It's a point she has stressed repeatedly in debates and public appearances. Visitors to her campaign website are immediately greeted by a pop-up plea to "sign the petition" calling for schools to return to in-person learning.

Although the state superintendent position doesn't have the authority to make all schools reopen, Kerr said she is pushing the issue.

"It's about leadership," she said. "The state superintendent does not have the authority to reopen schools, but I can make sure that I encourage everyone — strongly recommend — to follow the science, to follow the leads of Dr. (Anthony) Fauci and (the Centers for Disease Control and Prevention), but make sure that they have all the resources and curriculum and support all the way through, to reopen their schools quickly and safely."

Kerr has taken a harder stance on in-person education than her opponent, who has said those decisions should be made based on local conditions.

Although reopening has become a third rail of education policy disagreements during the pandemic, Kerr and Underly have also taken different stances on the perennial hot-button education battle — voucher programs for private schools.

While Underly has said she would advocate for freezing the voucher program, Kerr has positioned herself as a strong advocate of the state program.

"I've actually been in very successful school choice and charter-voucher schools, and I don't think a lot of others have been," she said. "I want to work together as a team, and I'm tired of the polarization and the political fatigue."

The pro-school voucher group the American Federation for Children has spent $56,500 opposing Underly, although the organization is being outspent 12 to 1 by the left-leaning A Better Wisconsin Together, which has put $675,000 into campaigning against Kerr. Liberal groups have also spent about $90,000 in support of Underly.

Kerr Pushes Back Against Concerns

Kerr drew attention the morning after the February primary election when she tweeted about being called the N-word in response to a tweet soliciting people's experience with the racial slur. Kerr, who is white, wrote that, "my lips were bigger than most and that was the reference given to me." She later apologized and deleted her Twitter account.

Opponents have also raised concerns about how Kerr handled a 2009 incident where the Brown Deer business manager overdrew the school district's bank accounts by $500,000. He remained on the payroll for 17 months. She also later wrote him a letter of recommendation in which she called him a "good steward of public funds."

In a March 17 virtual debate hosted by Marquette University, Kerr and Underly argued over the 2009 incident, as well as a TV ad about it released by the Underly campaign.

Kerr, who has repeatedly lamented the politicization of the state superintendent's race, called the concerns and the ad "unfortunate."

"What I can say is that the dark money from the teachers' union is putting out those ads. They're not true," she said. "It's unfortunate that that's what it's come down to in this nonpartisan race."

Although the state superintendent position itself is nonpartisan, Lilly Goren, a Carroll University political scientist, said it's fairly typical to see this kind of political battle in these races.

"We have the other nonpartisan office like justices on the Wisconsin Supreme Court, which are also nonpartisan offices but have become super-partisan races, particularly after the primary," she said. "The fact that this race has become fairly partisan, even though the candidates are saying they're surprised by it, is in context of some of these other, quote 'nonpartisan races'."

Colleague: 'She Will Be The First To Champion'

Kerr has worked in schools ranging from private to charter to traditional public schools, and with her most recent role being Brown Deer's superintendent for 13 years.

Barbara Fleming, who served on the district's school board during Kerr's tenure, said Kerr went above and beyond to support her students.

"I recall late one afternoon hanging clocks with her in portable classrooms that had just been delivered the day before school was supposed to start — she ran over to the store, bought clocks, and got on the ladder," said Fleming. "She's willing to do those sorts of things, but also she has vision, she has leadership, she can bring groups together. And if she feels that her students or her school has been unfairly treated, she will be the first to champion them."

Fleming also recalled Kerr writing an open letter after several racist incidents against her district's athletes at away games.

"Dr. Kerr, at one point, decided that enough was enough and actually issued a paper called 'Enough is Enough,'" said Fleming. "She pointed out the disturbing things that were happening and the fact that we needed to be teaching our students more character education and how to get along with one another and respect one another." 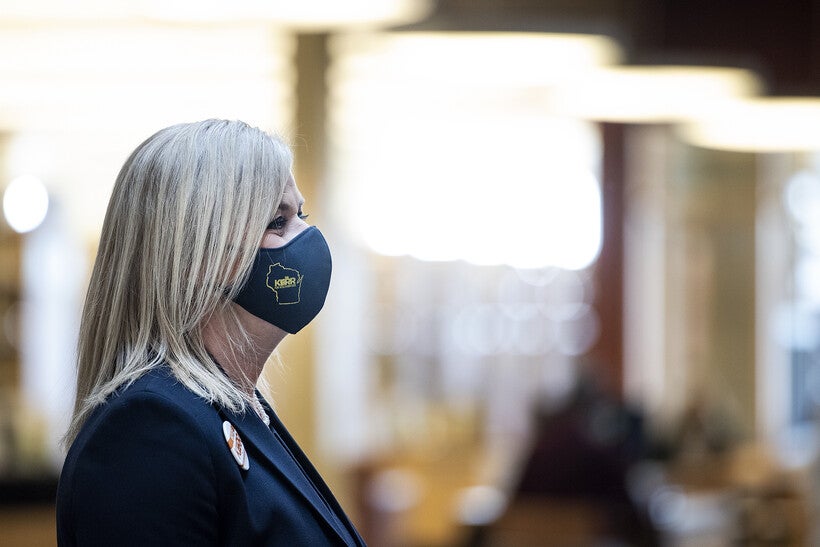 Both candidates have highlighted equity as a key concern for the next state superintendent. Wisconsin has the largest achievement gap between Black and white students in the country, which Kerr said she plans to take steps to reduce.

To her, the first order of business is returning students to in-person learning.

"Our kids who have been in virtual learning for over a year are some of our most marginalized and vulnerable learners, and I just think we're further exacerbating the achievement gaps if we don't get back to school now,” she said.

Kerr said her 13 years leading the Brown Deer School District show she has the experience to understand the needs of a diverse student population and can take that expertise to the state superintendent's office.

"I always would say we put the 'urban' in suburban, because we had 80 percent students of color and 50 percent economically disadvantaged," she said.

Moving DPI Out Of Madison

Kerr has also said she'd want to decentralize the Department of Public Instruction, opening offices in other parts of the state so districts would have a more direct line to the state education agency. She said she wants DPI to act more like a customer service agency that's more transparent and more accountable to the state's schools.

"I want everyone to know who the state superintendent is, and who the Department of Public Instruction is, with full transparency in communicating our goals," she said. "We could have more support in local districts all throughout the state and really put some of the resources where they need it the most. That's what equity’s all about."