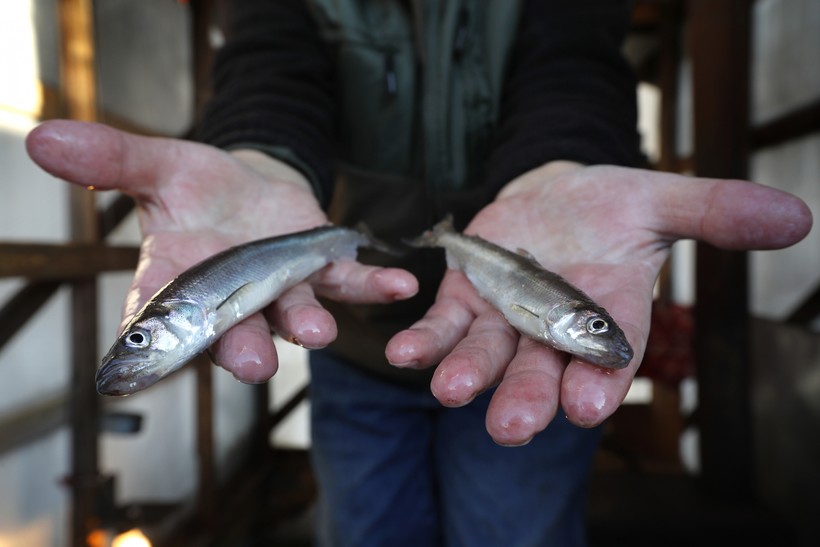 In this Friday, Feb. 2, 2018 photo a pair of rainbow smelt are held by a fisherman at Jim Worthing's Smelt Camps on the Kennebec River in Randolph, Maine. The state's smelt population is continuing to rebuild, which is good news for fishermen who squat in frigid shacks to catch the little fish through the ice. Robert F. Bukaty/AP Photos

Gov. Evers' Budget Would Provide $20M For Local Communities Affected By The Man Made Chemicals
By Shamane Mills
Share:

Wisconsin's top health official is emphasizing the importance of addressing contamination from PFAS chemicals and their effects on residents' health.

During a webinar Monday with officials from the Department of Natural Resources, Wisconsin Department of Health Services Secretary Karen Timberlake said what environmental and health officials are learning about perfluoroalkyl and polyfluoroalkyl substances presents an "emerging frontier" that is a challenge to human health.

These so-called "forever chemicals" are found in some firefighting foam, fast food wrappers and other products. PFAS have been linked to health problems, including some cancers, thyroid disease and reproductive issues.

"The group of chemicals that we refer to as PFAS are extremely common," said Timberlake. "They can have significant effects on human health. They really do represent another emerging frontier of a challenge to human health, not unlike COVID-19."

PFAS contamination has been found at more than 50 sites statewide, including the Town of Campbell where thousands of residents on French Island were recently offered bottled water by the state due to well water safety concerns.

Most recently, state officials issued a fish consumption advisory for inland trout in Monroe County because of PFAS. The chemicals have also been found in deer liver near Marinette.

The DNR will soon be taking comments from the public on how much it would cost to implement standards meant to protect drinking water and groundwater, Johnson said.

The governor’s proposed spending plan would also include money for testing public water supplies. During the webinar, DNR policy advisor Mimi Johnson said it's important to sample as many public water systems as possible. Additionally, samples would be collected from 44 rivers and the DNR will continue testing fish and wildlife, she said.

More than two-thirds of Wisconsin residents get their drinking water from groundwater, and in November, state health officials proposed groundwater standards for 16 PFAS chemicals.

The federal government currently does not regulate PFAS as a hazardous substance.