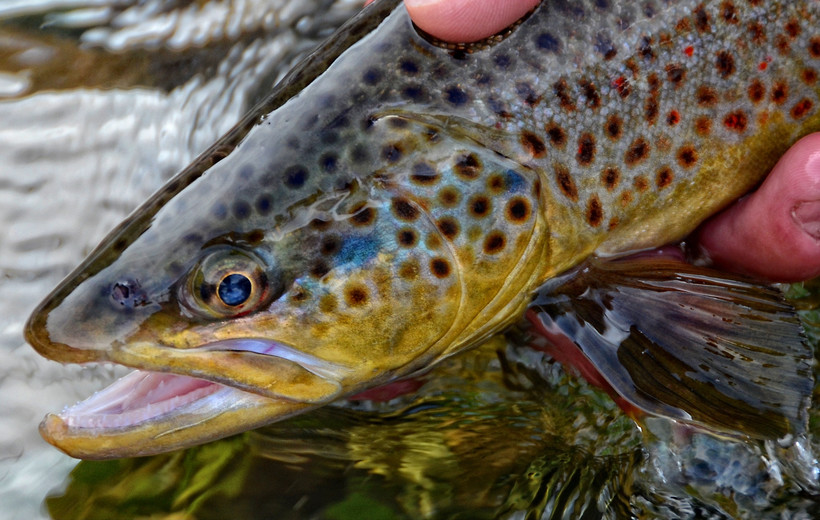 State environmental regulators and health officials are advising people to limit fish they consume from a creek in Monroe County due to unsafe levels of so-called forever chemicals known as PFAS.

The Wisconsin Department of Natural Resources and the Department of Health Services have issued a fish consumption advisory for brook and brown trout in Monroe County’s Silver Creek, which flows through Fort McCoy. It’s the first such advisory for inland trout species in the state.

Sean Strom, a DNR toxicologist, said monitoring showed levels around 60 parts per billion within the fish. That’s much higher than the state’s recommended groundwater standard of 20 parts per trillion for PFAS chemicals. Strom said the reason is that PFAS tends to bioaccumulate or become more concentrated in people and fish.

"The levels that we observe in fish and wildlife are always much higher than what are detected in water," said Strom.

The DNR discovered high levels of PFOS, one of the two most widely studied PFAS chemicals, as part of monitoring conducted last July.

"Limiting your exposure to PFAS by choosing fish that are low in PFAS, and avoiding eating fish with elevated levels of PFAS, is the best way to reduce your risk while still maintaining the health benefits of fish consumption," said Dr. Jonathan Meiman, chief medical officer and state epidemiologist for occupational and environmental health at DHS, in a statement.

The extent of the PFAS contamination in Silver Creek is not yet known. The DNR and Fort McCoy plan to conduct more testing later this year. Strom said testing will be conducted up and downstream from the two locations sampled last year.

“We're hoping to collect fish from Angelo Pond, which Silver Creek flows into,” said Strom. “Angelo Pond is part of the La Crosse River, so we're hoping that fish will be collected there as well.”

The DNR said in an email Thursday that one of the known sources of PFAS in Silver Creek is likely associated with the use of firefighting foam at Fort McCoy.

In 2016, the U.S. Army detailed results of PFAS sampling of monitoring wells and borings near burn pits at Fort McCoy to state and federal regulators. The Army used Aqueous Film Forming Foam that contains PFAS as part of fire training at those sites. The foam had been in use prior to 1982 at one of the burn pits, and the groundwater flow was found to be moving north-northwest toward Silver Creek.

Despite chemicals migrating in groundwater from two pits for decades, the Army said at the time that levels of PFOS and PFOA that exceeded the federal health advisory level of 70 parts per trillion were roughly 2,400 feet south of the creek.

In 2017 and 2018, the DNR directed the U.S. Army to investigate and clean up PFAS contamination at three burn pits at Fort McCoy. The Army recorded levels of PFOS within a monitoring well at one burn pit as high as 120,000 parts per trillion.

The Army has completed review of a revised final draft report regarding a preliminary assessment and site inspection for all three burn pits. The report finds that a remedial investigation and feasibility study will be required for those sites. The Army expects to have a contractor to conduct that work this year, according to the DNR’s database of contaminated sites.

Silver Creek is considered a popular draw for anglers who fish at Fort McCoy. Anglers are required to hold a fishing permit from the U.S. Army and a state fishing license in order to fish in Silver Creek.

Perfluoroalkyl and polyfluoroalkyl substances, commonly called PFAS, represent thousands of manmade chemicals that are found in firefighting foam and everyday products like non-stick cookware and stain-resistant clothing. The chemicals don't break down easily in the environment.

PFAS chemicals have raised concerns because they’ve been linked to health problems, including cancer, thyroid disease and reproductive issues. PFAS contamination has been identified at more than 50 sites statewide, including sites like Fort McCoy, Marinette, Superior and Madison.