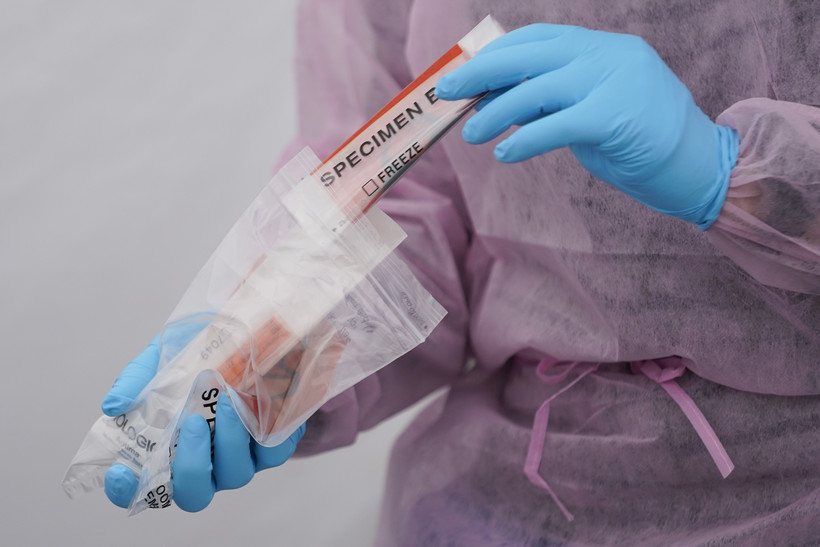 Alexander Panis, nurse practitioner at St. John's Well Child and Family Center, prepares a COVID-19 test on Thursday, June 25, 2020, in the Wilmington area of Los Angeles. Truck drivers at the Ports of Los Angeles and Long Beach were offered free testing from the International Brotherhood of Teamsters. Ashley Landis/AP Photo

New daily cases have topped 2K during second week of May, though well below winter rates
By Rich Kremer
Share:

New cases of COVID-19 are on the upswing in Wisconsin, but not nearly at the rate seen last winter.

During a Tuesday appearance on Wisconsin Public Radio's "The Morning Show," State Epidemiologist for Communicable Disease Dr. Ryan Westergaard said there were days in March where as few as 200 new cases of COVID-19 were reported.

But during the second week of May, he said, there have been daily counts of 2,000 cases or more.

"So, it's an upswing," said Westergaard. "But not nearly as dramatic as we'd suffered during the winter, but something that we need to pay attention to."

More than 61 percent of Wisconsinites have completed a series of COVID-19 vaccination shots. Around 34 percent of residents have gotten additional booster shots.

Westergaard said many more individuals have been infected with COVID-19, giving them some level of natural immunity.

"So, we're not as vulnerable to severe disease as we were before," said Westergaard. "But at the same time, we as a community or as a species, if you will, have gotten stronger in fighting against the coronavirus. The coronavirus has evolved to spread more and more easily."

Westergaard pointed to the omicron variant of the coronavirus, saying it was devastating because it was capable of spreading over long distances in the air. He said the original omicron variant is "nowhere to be found" now, but descendants like the BA.2 subvariant are circulating in the state.

It's unclear whether the current uptick in COVID-19 cases will subside during the warm summer weather, Westergaard said. He said that's typical of respiratory diseases, but COVID-19 has been more sporadic.

Regardless, Westergaard said the best way to prevent severe disease from COVID-19 is vaccination. He also encouraged individuals to talk with their doctor about oral treatments like Paxlovid, which has been shown to reduce the risk of severe illness and deaths by 90 percent if taken within five days of infection.