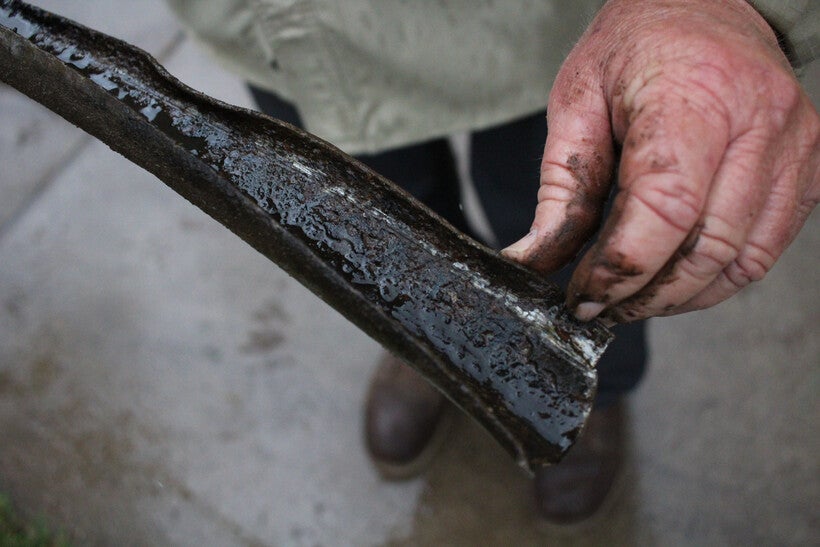 Montana Birt of Montana and Son Grading shows the worn-down protective coating of an old lead service pipe on June 29, 2021. The pipeline was removed from a home in Eau Claire, Wis., as part of a citywide initiative to replace potentially hazardous lead pipelines with those made of copper or plastic. Madeline Fuerstenberg/Wisconsin Watch 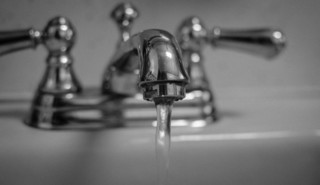 The city of Eau Claire received its first state grant to replace an estimated 1,266 residential lead service lines only a year later. The city has replaced about 400 lead service lines with those made of copper or plastic, and more are soon slated for swapping.

"We want every lead service line out of our system,” Lane Berg, the city's utilities manager, said while giving a reporter an up-close look at a replacement job. "So, we've set a goal: By the end of 2023, we want to have all the lead out."

In meeting that goal, Eau Claire would join Madison and Green Bay on a list of Wisconsin cities that have rid their water systems of lead service lines, which typically consist of both utility-owned and privately owned portions. 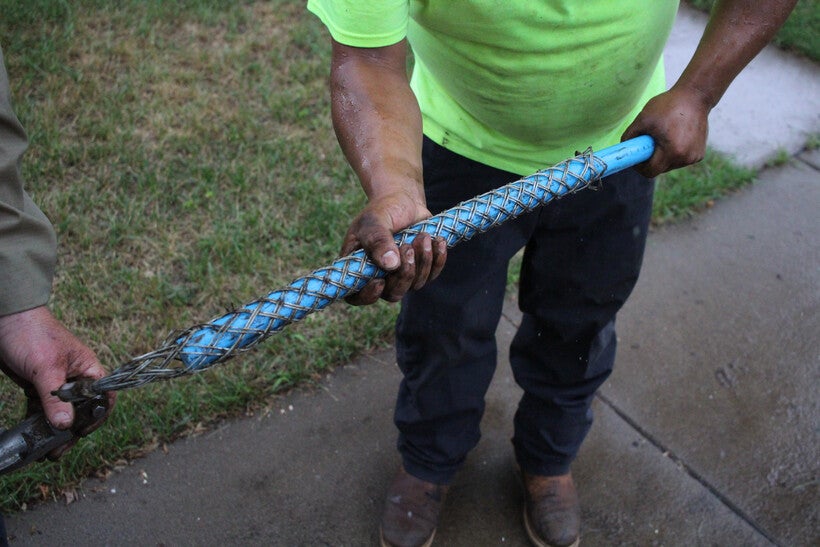 Utilities workers demonstrate a lead service line replacement in Eau Claire, Wis., on June 29, 2021. Spurred by the widely publicized lead-in-water crisis of Flint, Michigan, Eau Claire has replaced hundreds of its 1,266 lead service lines since 2017 and has a goal to finish by 2023. Madeline Fuerstenberg/Wisconsin Watch

Since 2016, Wisconsin communities have replaced more than 115,000 utility-side and private-side portions of pipelines made of lead, galvanized steel that may contain lead flake buildup — or other materials that might contain lead, state Public Service Commission data shows. That’s about 20 percent of Wisconsin’s known pipelines made of those materials.

In Flint, state officials in 2014 approved a drinking water switch from Detroit's water to the Flint River. But the state failed to require treatment to control corrosion of aging lead pipelines. Highly corrosive river water caused lead to leach into drinking water.

Eau Claire's water is far less corrosive, Berg said, and a lime additive coats the inside of the city’s pipelines, further minimizing lead risks. Just 11 Eau Claire County children were found to be poisoned by lead in 2020, or 1.4 percent of those tested. That was lower than the state average of 3.4 percent.

The Wisconsin Department of Natural Resources has granted Eau Claire $1.6 million in recent years to do just that, and Berg anticipates receiving additional funding, although nothing is guaranteed. 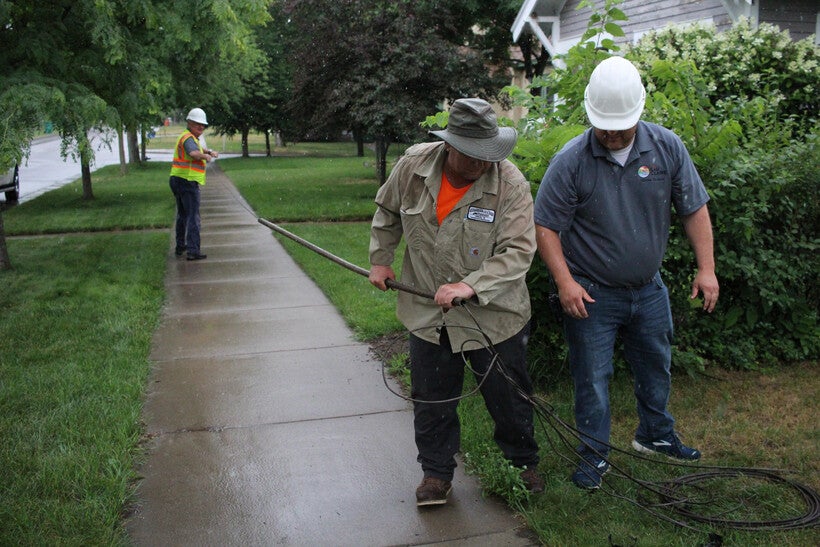 From left: Lane Berg, city of Eau Claire, Wis. utilities manager; Montana Birt of Montana and Son Grading; and Seth Smiskey, a utilities supervisor for the city, demonstrate a lead service line replacement on June 29, 2021. After digging a hole alongside the street curb to gain access to the lead pipe, workers insert a long metal cord through that pipe that reaches into a home. A replacement pipe is attached to the cord. As the old lead service line is pulled from the ground, the replacement pipeline is pulled into place where the old pipe sat, then it is connected to the water main. Madeline Fuerstenberg/Wisconsin Watch

"Teaming up with the DNR put lead service replacements on a much higher priority," Berg said. "We are so thankful for the grant money."

While some residents might want to avoid digging and disruption that comes with a pipeline replacement, Berg said city workers have found success by spending hours canvassing neighborhoods — encouraging residents to schedule service line inspections— and tracking their progress. Seth Smiskey, a utility supervisor for the city, is one of those workers.

After inspecting roughly 20 percent of houses while canvassing a neighborhood one week, appointments typically start trickling in over the next two or three weeks — sometimes representing about 80 percent of the neighborhood, Smiskey said.

A city ordinance requires service line replacement when a lead pipeline is encountered. Smiskey leaves for homeowners a letter that mentions the requirement and encourages them to "take advantage of our program now while we still have grant money to replace your lead service." 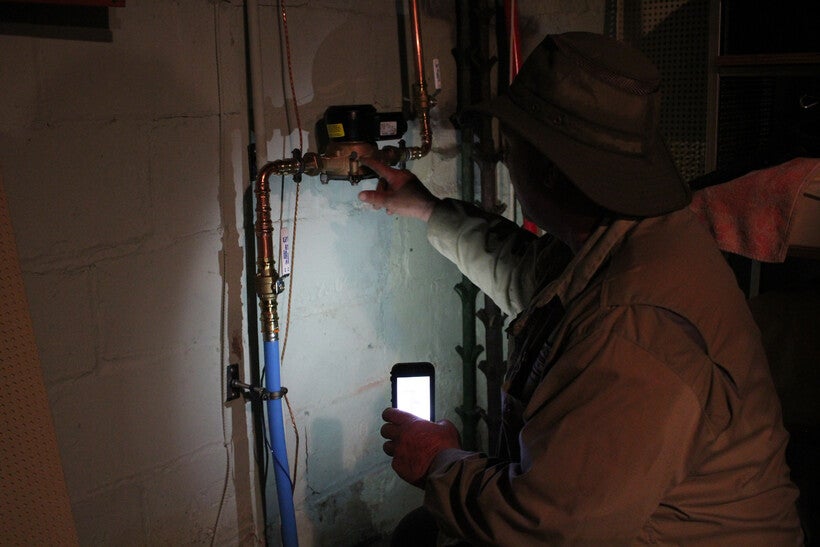 Residents may apply to the city's Lead Service Line Replacement Program for funding. Once approved, a local contractor from a preselected list will be contacted to do the replacement. Each job takes a few hours to complete, with digging typically limited to a small hole between the street curb and sidewalk. The city pays the contractor up to $2,600. Any additional cost falls to the property owner.

Service line replacements can cost anywhere from $1,200 to $12,300 per line, according to the U.S. Environmental Protection Agency. But participants in the Eau Claire program typically pay nothing, Berg said.

"The biggest thing I see on the program — the improvement — is when the city started reimbursing the contractor directly," Montana Birt, of Montana and Son Grading, told Wisconsin Watch as his colleagues replaced a service line at the home of Eau Claire resident

Sally Grundman. "That way it takes all the burden off of the homeowner."

Grundman said she was happy to take advantage of the program and was "very much" satisfied with the contractor's work.

"At some point, Eau Claire will probably have everybody doing (replacements)," Grundman said. "And then the money won't be there. So it’s good we did it when we did."

Editor's note: Madeline Fuerstenberg’s work on this story was sponsored by the Ann Devroy Fellowship at the University of Wisconsin-Eau Claire. The nonprofit Wisconsin Watch (wisconsinwatch.org) collaborates with Wisconsin Public Radio, PBS Wisconsin, other news media and the University of Wisconsin-Madison School of Journalism and Mass Communication. All works created, published, posted or disseminated by Wisconsin Watch do not necessarily reflect the views or opinions of UW-Madison or any of its affiliates.